A Parking App is Available and More Spaces Are Coming: A Downtown Parking Update 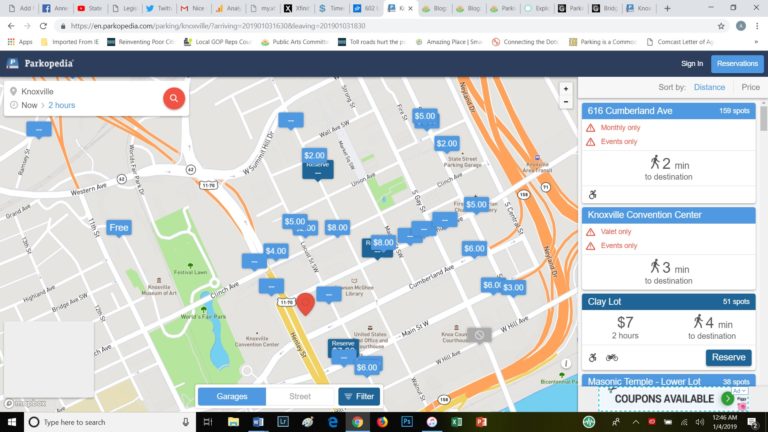 Very early in my stint as a downtown blogger I was told by a city official that parking was a never-ending conversation in every city. Obviously, it was true. We were talking about downtown parking in 2010 when I started this blog and the topic just keeps on giving. I think many people have realized how much parking we have downtown and I hear the refrain, “You can’t park downtown,” much less often than was the case in the beginning.

For those of us who like or need to come downtown and choose or must do so in a car, the city is attempting to make things better. I know, I know, you don’t like the most recent changes in on-street parking. Or you do. Opinions have varied widely. But we have to face the fact that the majority of downtown parking will be in garages and not on the streets. There just isn’t that much of it. Find a space on the street? Good for you! Lucky day! Most days? Not so much.

The city is, however, continuing to expand garages. The State Street Garage was updated a few years ago and the work completed at that time allowed for a future expansion, as the need arose and funds were available. That time is now, and the city is spending $11,000,000 to add two levels, for an increase of 570 new parking spaces just a block off Gay Street and two from Market Square. Plans call for completing construction by this summer.

As you might imagine, this creates some heartburn in the meantime. Part of Central Street is closed now and, soon, part of State will be closed. The city maintains a helpful blog on the construction and they’ve recently given “parking tip sheets,” alerting people to the events happening downtown, but mostly the blog is used to give updates on the progress of the construction and detail the shifting closures. There are, as Rick Emmett notes in the included video produced by George Brock Scott, 7,500 parking spaces within just a few blocks of the garage.

The city is also taking steps to improve access to the available spots. There have long been maps showing locations of downtown parking and giving information on each, like that found here. In late 2017, the city became slightly higher tech when it added sensors to the Market Square Parking Garage, giving an real-time count of available spaces and displaying that number at the entrances. The sensors have since been added to the Locust Street and State Street Garages, with plans to include other garages. It at least allows a quick glance to see how easy or difficult parking might be at any given time.

Robin Thomas of CBID also noted that their organization is making quite an effort to help.

Our website includes locations and lists of all garages and lots and includes which are free on nights/weekends and 24/7 (including Langley, Old City lots and Coliseum). You can click thru on a garage or lot and details are provided on pricing and number of spaces. (See above link)

We also recently added to the top of our website real-time data on parking availability at Market Square, Locust, Main, and State Street. Actual availability is shown and numbers go to yellow when low and red when full. The site also recommends closest available municipal parking on each of the business pages.

More recently, an app has been adopted in an effort to help make parking another step easier. You have a couple of options, here. You can see the app on your computer by going to Parkopedia.com and searching for Knoxville, TN, or you can download the app on your smart phone. The idea is that you can see, not only the locations of downtown parking, but also check availability even before you arrive. It also gives prices which change depending on time of day.

I’ve downloaded it just to check it out and I’d give it mixed reviews. It only includes availability for Market Square, Locust Street and State Street, because they are the three with sensors. (I am assuming State Street has sensors due to the map. I haven’t confirmed this.) At that, I can’t see a number only a range “High Availability,” for example. For the others, it lists only the total number of spaces. 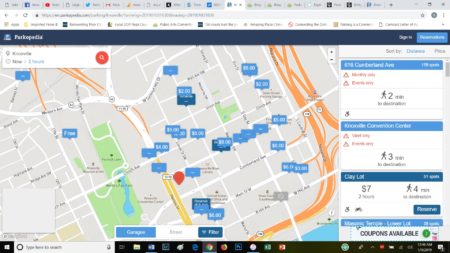 Also problematic: It doesn’t include several major parking options. I can’t find either the free parking beneath James White Parkway in the Old City or the Coliseum Garage, both of which are very important to downtown parking. The parking lot is free all the time and the Coliseum Garage may be the most underutilized in the city. I also don’t see the Langley Garage which, though private, is also open to the public and free nights and weekends. I assume they will be added later, but it seems odd they would not be included at the outset.

Still, if people will take the time to download the app and experiment just a little bit, they’ll likely discover parking garages they didn’t know were open to the public and free at night and on weekends. It’s also helpful to see prices and to realize how cheap it is to park downtown. In public garages, it is $1 per hour. Beat that in any significant city you visit.

So, download the app, give feedback here or on the app itself and let’s see if we can help turn it into the great tool it could potentially become.