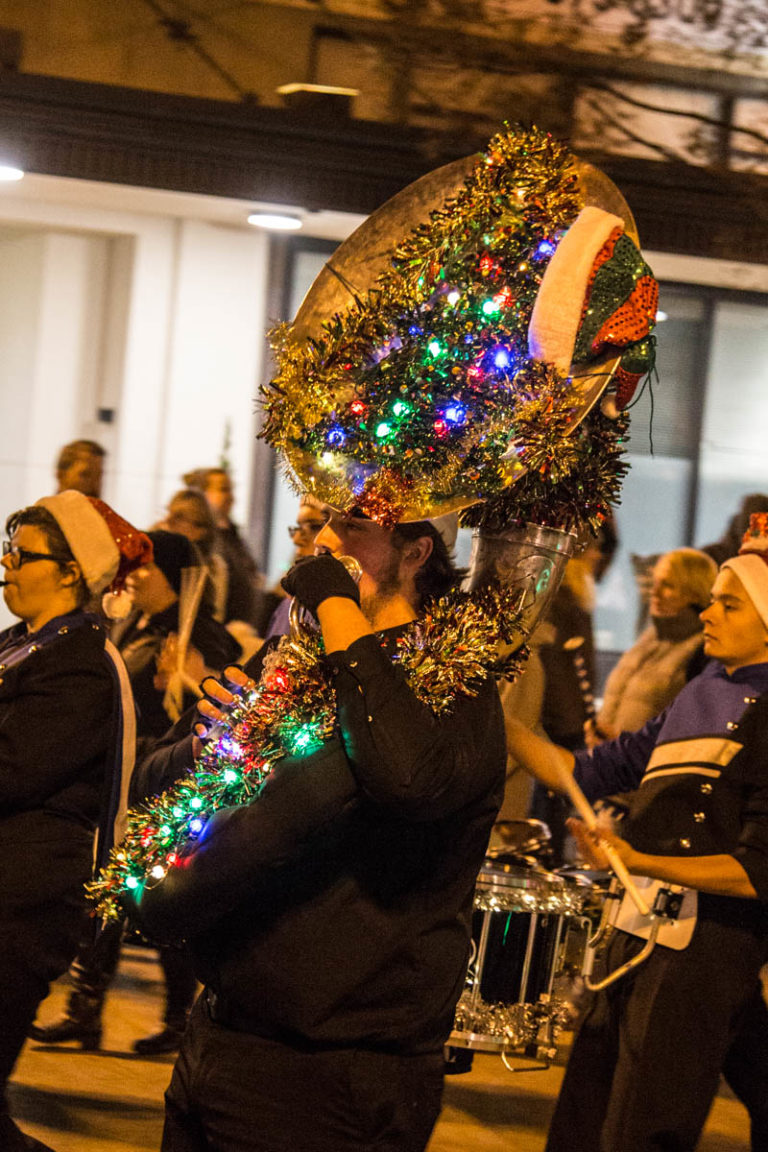 I’m going to break this into two parts because it was so long and, honestly, so good I ended up with too many photos for one article. Look for the second one later today. We’ll hit it up from the beginning: It was cold enough to be festive, but not enough to be painful. Given the last parade I attended (Macy’s Thanksgiving Parade) featured 19° temperatures, this one was quite pleasant.

Large crowds lined Gay Street, as usual. We planned to walk into the Old City and watch it on Jackson, but we were caught off guard when we got to Gay Street around 7:00, the official start time, and realized the parade had already gotten to Summit Hill. Early start?

We grabbed spots on the 100 block which was lightly populated relative to the other side of Summit Hill. It was a small but enthusiastic crowd and we had a great time with everyone who gathered there.

It was clear from the beginning the parade had upped its game over previous years. Rusty Wallace was the Grand Marshal and a large number of floats in the parade seemed to have a connection to the Rusty Wallace family of dealerships. Was there an influx of money for floats? We noticed at least several bearing the moniker of Cline’s Floats, a North Carolina company, which sells kits for floats. I’m for it.

Of course there were vintage fire engines, decorated cars and decorated machinery. I could use a little less machinery, but I’m sure others love it. I am happy we didn’t have wrestlers, an Ark or a larger-than-life crucified Jesus (wrong Bible stories for the season) as we’ve had in the past. There were certainly groups some of us might grumble about, but it seemed we may be moving in the right direction.

Grace Christian fielded a vocal ensemble and that was a nice touch to balance out the bands. It’s kind of like caroling, no? I also enjoyed the truck on a float as a sleigh being pulled by little trucks as reindeer, but maybe that was me. A nicely decorated veteran float was near the front and was well-received.

Knox Rockets scared our kids. Maybe your kids loved it, but it hurt all our ears. Cool group, doing their thing, but not our cup-of-tea. And children in the parade? Tons and tons of cute little scouts and others. Mostly they were huddled on floats looking cute and cold. One sign that this parade was a step up was that the Shoney’s float is always one of the best and now it’s middle-of-the-pack. Shoney Bear has to work a little harder next year.

We liked the mowers with people in onsies driving them. A rabbit (?), a gingerbread man and Olaf and the monster from Frozen delighted our little ones. The cat walking in front of the casino float? Creepy. I’m like, “Go Cat, Go.” Like keep on walking, you creepin’ me out.

We loved all the high school bands, of course, along with their flag corps and majorettes, etc. Love that tuba with the Christmas tree cover. The Bruster’s van made the kids want ice cream even in the winter. That’s a pretty cool Van, actually.

I’m halfway through the photos, so I’ll break here and be back later today with the second half!