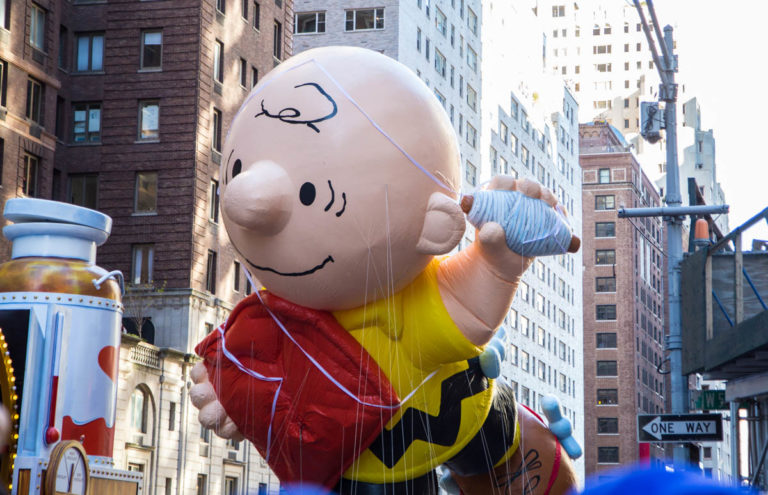 It was all building up to this. The journey started a year ago when my dearest Urban Daughter called, attempting to be cheerful as we were separated on Thanksgiving Day awaiting word of my father’s demise, during the parade. She’s loved it since she was a child, never wavered and never missed watching it on television. That set me on the mission.

As I researched and thought about the realities of the parade, I realized it might be cold (it turned out to be 21°, good call). I realized we’d have to arrive early to get a spot on the sidewalk. I realized there would be no restrooms. I considered that we would have a three-year-old and a nine-year-old. I did the math. It didn’t look pretty.

I began looking for creative ways to watch the parade but to also have access to warmth and bathrooms. And what about seating? I found a restaurant on the parade route (thanks to a tip from a friend) which serves brunch (for $.5 million for a group of seven) during the parade and features a large viewing window. Only they also currently feature the ubiquitous New York City scaffolding and could not assure an actual view, simply a possible view. I declined.

The search then shifted to hotels on the parade route. There are a number and they are booked months in advance. They also cost a million dollars, your family home and your first-born grandchild. I found the Warwick Hotel on 6th street, bargained down to a great-grandchild and plunked down my million dollars (in advance, no refunds!), and we were set.

Our adventure actually started the night before. I learned through my research that the inflation of the balloons, which naturally has to take place the night before, is held in the area of the Museum of Natural History. Urban Girl loved it last year and was keen to show her brother and parents the wonders of dinosaur bones and dioramas. We enjoyed a meal of Turkish food, then they went to the museum while Urban Woman, Urban Brother and I shopped a bit, got coffee and generally tried to keep warm.

We rendezvoused as the line began to form. It turns out, we weren’t the only ones onto this pre-parade spectacle. Apparently word had leaked out to a hundred thousand or more of our friends. We moooved like cows through the streets, through security and, finally, to the balloons.

The balloons were inflated and lying on their sides in nets, clearly freezing as much as the rest of us, smiles frozen in place, perky exclamations designed to hide the fact that we all dreamed of warm hotel rooms. We passed by one block of balloons, moved a block to the next group and viewed another block of netted inflated vinyl. We needed a miracle.

And then we got one. We’d joked all afternoon about snow. It wasn’t in the forecast, but we said if we could just have four or five flakes we’d feel like we were in New York for the holidays. Then, just when our frozen exhausted bodies could take it no more, it snowed. Big flakes. Thousands of flakes. A torrent of snow on the streets of New York. Someone said Dad had slipped an angel a $20 bill. I’m not doubting it.

It stopped after about five minutes. Urban Girl was crying from exhaustion, all of us were tired. We saw an opening in a barricade that led to the subway. All of us and twenty thousand or so of our new friends ran for the opening, plummeting into the subway station only held erect by the press of the crowd. And then the second miracle: The subway workers wished us a Happy Thanksgiving and said the ride was free. We headed to those warm hotel rooms, stopping in the hotel restaurant for a warm meal to end the night.

The next morning we scrambled out to get food for everyone and brought it back to the room. The hotel offered a simple breakfast for about $100 a person, but we chose Pret a Manger for under $100 total. Take that, New York City! The kids stayed in their PJs, had breakfast in bed watching parade coverage on television, while awaiting it on the street below.

The parade began and, while we could see it from the room and Urban Daughter, Urban Woman and the little ones were content to be warm and watch from above, the guys couldn’t help getting out in the parade at least for a bit. The ropes had been shortened because of high winds, making them further below us than would otherwise have been the case.

Hence, I started the parade in the room and spent most of it on the street until I could no longer feel my various appendages and retreated to the room to view the last few floats. The parade was more fun on the streets, but much less painful in the room. It was great to be among the crowds, even the obnoxious ones near me who carried on a continuous, sporadically funny, narration of the parade.

Part of the narration included calling out the names of the celebrities who passed. I shot Martina McBride, John Legend, Barenaked Ladies and Dianna Ross (from above). They did sometimes know the celebrities, but if not, that didn’t stop them from yelling out “Taylor Swift!”

It was a fun parade and, though it’s never been a priority for me, I’m glad I attended. The reality of attending something so iconic that always seemed almost mythical and universes away from my little Alabama childhood can’t be overstated. I’m delighted that my daughter was delighted, but I was also happy to be there.

I scampered back inside and watched Dianna Ross and Santa cross the finish line by our hotel. Later they passed by Macy’s and it was over. We took a very long winter nap. Our exhaustion had finally caught us all and we had more to come. We ventured out briefly to a shop or two that afternoon, followed by Thanksgiving dinner at Connolly’s Pub just a couple of doors down from the hotel.

A final day of New York City lay ahead, with Thanksgiving becoming Christmas in the city. It was to be a big final day, but that’s a story for the final installment. Stay tuned later this afternoon.