Inside of New York City: Christmastime in the City (And One Last Quintessential New York Experience) 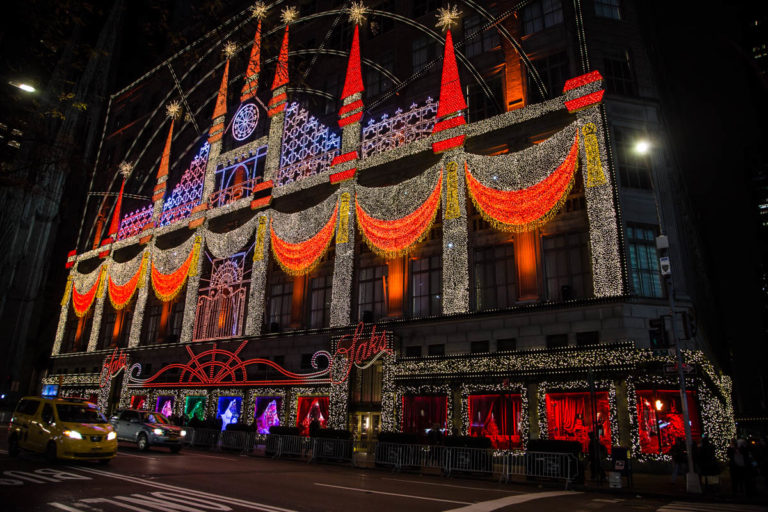 We’d planned our trip to switch from Thanksgiving to Christmas on Friday morning and it did. But the city is lighted for Christmas well before Thanksgiving and the intensity builds through the week. By Friday, even the scaffolding around the buildings is festive!

You’ve seen a few Christmas photos already, but I haven’t shown much in the way of windows and the full-building decorations. We found these mostly on Fifth Avenue. In some ways it’s good having only a vague idea of what to expect, because the surprise adds to the experience.

The building that sets the standard is Saks Fifth Avenue. When we first arrived we noticed some metal structures over the front of the store and wondered what kind of strange scaffolding that might be. It turns out to be a massive LED display that grows, changes and glows with a Christmas soundtrack. At about six stories high, it can be seen from far down fifth and it dazzled our small-town minds.

And then there are the Saks windows which feature an annual theme. This year’s theme is “Theater of Dreams,” which is a tip of the hat to Broadway. The sequenced windows tell a sparse story while displaying high fashion in Christmas colors. All while the light show plays above. It was pretty magical.

Just down the street, the Bergdorf Goodman windows are also famous and have their own style, as well as a book celebrating their windows over the years. I’m sure there were other great window spots, but these were our favorites that we found. By the time we got to Macy’s windows, the bitter cold encouraged us to scurry inside.

If anything, the Bergdorf windows were more avant-garde and futuristic. OK, so maybe a little bizzare. Not a lot of contextual connection to Christmas. Maybe evocative of Christmas with a smattering of Christmas colors and shiny baubles. Definitely beautiful.

So, we got up Friday morning, announced it was Christmastime, and took the crew to see the Rockettes at Radio City Music Hall. Like the parade, the Rockettes had never been a big interest, for me, but we figured the kids would love it and they did. And the adults liked it, too, including myself.

Simply being in Radio City Music Hall was a treat (though exiting these theaters is a nightmare – God forbid there should ever be an actual fire) and the Rockettes were very entertaining. The hour-and-a-half flew by and the 3-D effects, lighting and staging were pretty well amazing, especially for children.

We grabbed a quick lunch (and thought we might have seen Willie Nelson at the lunch counter – where was Willie the day after Thanksgiving?) and walked to Macy’s. We’d secured tickets for the opening day of Santaland on the eighth floor of the world’s largest department store. After seeing the recent Clarence Brown Theatre production of The Santaland Diaries (you still have 10 days!), even the adults were keen to see what we might find.

What did we not take into account? It was Black Friday. In New York City. In the most famous and largest department store in the world. What could go wrong, amiright? If you have never experienced Black Friday in Macy’s, let me tell you right now: DON’T. I’ve never seen such a maddening experience. Oceans of people swept in off the street and out of the cold in such a torrent that, once inside, the idea of an exit became very theoretical and a matter requiring much in the way of strategic thinking.

We made it to Santaland with our reservations and it went amazingly smoothly. You might think they had been doing this for a few years. The elves were just about like I’d expected from the David Sedaris piece. Some looked mortified to have really come to this while others were so enthusiastic, one might imagine they’d attained a life-long goal. We saw the tree mentioned in the play, crossed the rainbow bridge and arrived at Santa much more quickly than I could have imagined.

Santa was great. Very patient with all our posing and picture taking. We tried to make it fast and then Urban Brother treated the family by purchasing the photographs at the end (the only thing they sell). It was a fun experience. Like several other experiences on the trip, I was glad I’d done it once and don’t necessarily need to replicate it.

We had one final, joyful once-in-a-lifetime moments still in our bag before the return flight the next day. After dinner, Urban Daughter and I grabbed an Uber and set out for the Beacon Theatre. The legendary, nearly 3,000 seat theater has been the site of many well known shows and moments. Created for Vaudeville it has, in recent decades become known as a venue favored by artists who prefer to do a longer run at the smaller theater as opposed to one night in larger venue. The Allman Brothers were most famous for doing so and play over 200 shows in the theater.

It was Urban Daughter who, by fluke, noticed that Bob Dylan would begin a ten-night run in the theater on our last night in the city (you still have two nights to catch him there!). She laughed that at least we would be in the city at the same time as our hero: the city where the legend took shape in Greenwich Village, the city synonymous with Dylan. I laughed with her and immediately bought tickets.

And so, our final New York experience was a dream of a lifetime: Bob Dylan in New York City. The theater was beautiful, acoustically brilliant and packed. Dylan and band were great, running through twenty songs ranging from those early New York City days all the way through his most recent work. It was a night we’ll both cherish as long as we have memory.

And it was a fitting end to a great, great trip. The city is magical. It’s a necessary trip (or many trips) for anyone who loves cities. Back home, broke and tired, I’ll soon share details of my GoFundMe to raise money for a return. Not really, but I certainly hope to return before too much time passes. Thanks for sharing the journey with me. Now, back to your regular programming from the city we all love.