Coolato Gelato Closes (Will It Return?) 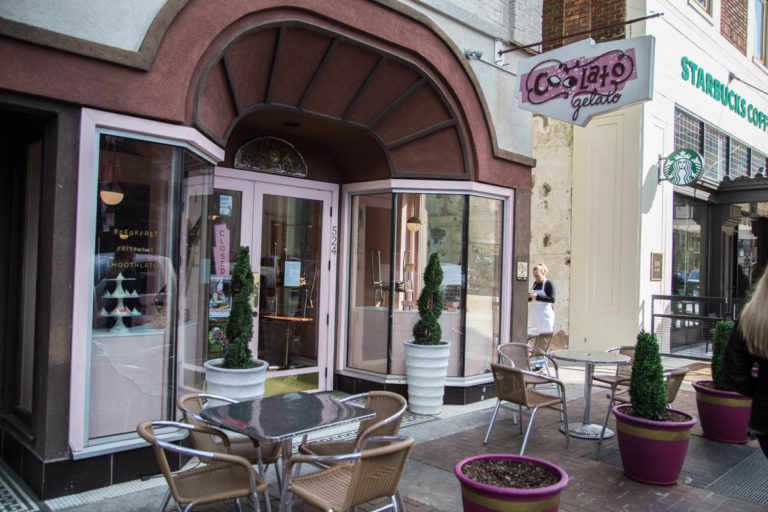 I met with co-owner Julianna Texada to get the details. She and her husband, John, purchased the business in July 2017. The 527 South Gay Street business was opened by Allen and Cherryl Meuret in 2009 and operated by the couple until they sold it to the Texadas.

The couple had introduced a number of changes, hiring a store manager, executive chef and two pastry chefs. They planned to grow the catering portion and had recently re-thought their menu with an eye toward focusing on the sweet side and reducing the savory side. They had redecorated the exterior and interior and, by the end, employed about twenty people, mostly part-time college students.

Julianna laughed as she remembered that her husband had to leave the hospital where she was giving birth in order to close on the business. She says they didn’t make changes at first, waiting to get to know the business, which she said was “overwhelming.” As he has a very demanding career, she ran the business for a while, then got help and ultimately returned to running it herself. She notes that it’s hard running a business alone and the fact that she had a newborn at home divided her attention.

She said business was very cyclical and acknowledges they may have tried to do too much and strayed from what people wanted. They had exotic flavors, but some favorites were missing, for example. She does feel the best direction for the business is a focus on the sweet side and on catering.

The spot, she says, was great and tough. Being between the Tennessee Theatre and the Regal Theaters was great for business when they let out and customers streamed past the doors, often stepping inside. One difficulty of the location is that being in the center of Gay Street’s most busy area isn’t cheap.

They though that when the Hyatt Place opened they might see a bump in business, but it didn’t seem to materialize. They offered lunch items such as sandwiches and soups, but that business diminished. Since they took over ownership, two additional ice cream shops opened in Kilwins and Cruze Farm and the competition made a significant dent.

It’s possible that as the newness wore off the other spots, business might have evened out a bit, but faced with discouraging numbers and the advent of cold weather, which is never good news for an ice cream shop, the decision was made to close. The fits and starts obvious on social media were due to last minute hopes the business might be bought by someone who could bring it back to profitability. After some ups and downs, the decision was made that they simply could wait no longer.

A look at the sign posted in the door gives a glimmer of hope that something might, yet, be worked out under new ownership. For now, ice cream options have been reduced to three and none of them are Italian ice cream. Stay tuned and, of course, if I learn anything encouraging, I’ll let you know.