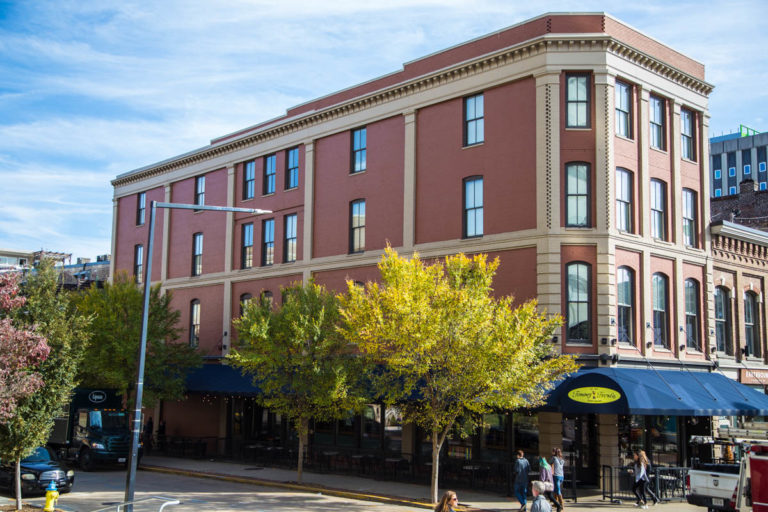 Dating to around the 1882, 36 Market Square has seen all the various phases of the square, from bustling to dead to bustling, again. Jack Neely in an article for Metropulse noted, “One building that catches the eye of architectural students is on the Square is northeast corner, with entrances on Market Square and Wall Avenue. At four full stories, it’s the tallest building on the Square, and features some cast iron construction and hints of a stylish architect’s work.” He adds:

Though sometimes called the Woods & Taylor Building, after the clothing store located there for a quarter century, that firm wasn’t the first in this building. It had hosted various dry-goods merchants before 1907, when it opened as the original location of another big department store S.H.George, well-known to Knoxvillians of the first half of the 20th century, especially for its later Gay Street store. Woods & Taylor, which moved in circa 1913, advertised as “dependable outfitters: correct clothes for men and women.” That store seems to have gone out of business during the Great Depression, promptly replaced by another clothier well-known to a postwar generation as Bower’s. The building eventually boasted a customer elevator, an unusual amenity for Market Square.

From that auspicious beginning, fast forward to 2000. The city struggled with what to do about Market Square. Many of the buildings along the east side, north of Tomato Head were crumbling. The owner was unwilling to either repair them or sell them. Bernadette West, over a period of several months convinced him to sell them to Scott and herself. They moved Earth to Old City to its current location, opened Uncorked and World Grotto beneath what is now Emilia, redeveloped that building and opened Preservation Pub.

and they begin work on perhaps the largest building on the Square, the old Woods and Taylor building at 36 Market Square, the four-story building that fronted both the Square and Wall Avenue. The four story brick building’s brick façade seem to be bowing outward dangerously; the Wests shored it up with braces decorated, high on the façade, with caricatures of themselves, Bernadette’s mother, and Fikrum Gencay, the previous owner.

The sheer amount of energy and expense the Wests put into the buildings astonished their neighbors, who wondered where the couple got so much capital. One answer came in July, 2006, when federal agents raided their WesTrent apartment looking for evidence of their involvement in a major marijuana–smuggling scheme… prosecutors proved about $2.1 million in marijuana-wholesaling profits and 25,000 lbs of cannabis. Both Wests went to prison, and the government auctioned their buildings to local developers.

With the Wests in prison, some of the buildings, including 36 Market Square, were auctioned and this particular building was purchased by Ken Mills in 2007. The building had been empty for years. The last business I remember there was a small market occupying just the front corner. In a row of buildings with bad roofs, it may have  been the worst.

Even at its most derelict, it became something of a community bulletin board featuring art by Cynthia Markert and Brian Pittman among others. Screeds railing against TVA as well as other writings appeared along the plywood decorating the north side of the building. I put up fliers there in 2010 to advertise a new blog called Stuck Inside of Knoxville With the Urban Blues Again.

The Wests had barely begun to renovate the building and gaping holes dotted the top floor. The building was inhabited by wild cats and pigeons, both live and dead. Random debris filled every floor. A large stash of World’s Fair Beer sat abandoned.

While their idea had been a hostel, in 2010, Ken began to renovate it into nine apartments on the upper floors and retail at ground-level. The facade was deemed to be too dangerously damaged to retain, so it was removed. Orange Leaf was the first business in the new space. They closed abruptly.

The Wests then became tenants in their old building, opening Market House Cafe on the ground level. They later shifted the concept to a sports bar and renamed it Tommy Trent’s after Bernadette’s father. Bernadette led the way on the recent improvements to the alley behind the east side of the square. They’d told Ken if he ever decided to sell, they wanted to get first refusal. Refusal was never a question.

When Ken recently decided it was time for him to sell, he contacted Scott. With a handshake, the deal was done. Fun trivia: the deal includes the old Blue Circle sign, which will be integrated in some way to the building. They do not plan immediate changes and  the eight tenants will have their leases honored. (The ninth unit has been leased by West.)

The historic tax credits utilized to restore the building expired in July, which allowed the possibility of selling the building. It also means the building could be converted to another use should the Wests determine to pursue another vision. In any case, a building that was once theirs is theirs, once more. The circle has been made complete.