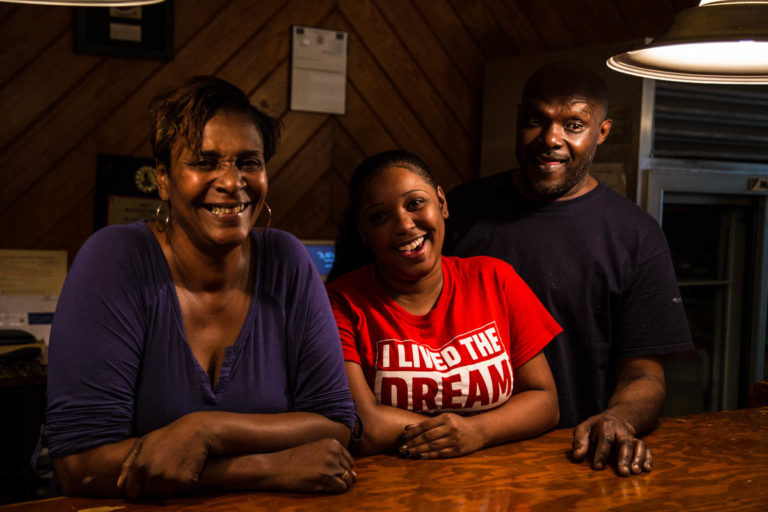 The building isn’t beautiful, either inside or out. Not much light gets in, the floor is buckled and the air conditioner doesn’t always work. In a way, it’s everything that would not attract customers, but it’s done just that from the beginning over two years ago because of the people and food those customers encounter once they enter. Now, the situation with the building has reached a breaking point and Jackie’s Dream must move — by the end of the month to a much better location.

After a great lunch of hot chicken, mashed potatoes, fried okra and sweet tea, I sat down with owner Jackie Booker-Griffin to talk about what brought her to this point. I found a warm and gracious, very direct and honest person willing to tell the whole story, tough parts and all.

She’s from Oak Ridge, where she graduated high school. Her mother’s side of the family comes from Oliver Springs and Harriman. She learned to cook from all her grandparents who she says were all good cooks. “I learned to cook greens from my grandfathers. Everyone had a garden. We’d meet at one of the houses every Saturday and can, cook and put back food for winter.”

She says her grandparents rarely went to a grocery store, eating from the garden and from having animals slaughtered. “We always sat at the table for every meal.” She also fondly remembers the preacher coming for Sunday dinner. Meanwhile, young Jackie was dreaming of . . . starring in the WNBA, not necessarily cooking, or at least that’s how she remembers it.

She worked at Buddy’s Bar-B-Q in Oak Ridge and transferred to the Buddy’s at Bearden Hill in 1999. She worked at Sawyer’s Chicken Fingers on 17th Street, cooking there for a year before becoming General Manager for three years. The business closed and she took at a stab at an office job with a finance company, but decided pretty quickly that kind of work wasn’t for her.

She then worked at Red Lobster, first as a prep cook, then a line cook before taking their grill-master exam and working the grill for three years. She returned downtown in 2009, taking a job as sous chef at the Crown and Goose. She worked there through the end of 2014, leaving in early January 2015. She gave herself a week to rest and think of what she’d do next.

It culminated just a few weeks later on a Sunday afternoon. Her cousin had come to her house to help her cook and fill the orders. The orders kept coming. Her cousin called in to work and said she wouldn’t be coming. By the end of the day, she called George Pelcher, her former co-worker at Crown and Goose and currently her business partner and said, “George, I made $500 in three hours!” George said he’d call her back when he got off work, but a guy had just called him to say there was a building available.

In February of 2015, they looked in the building to see the possibilities. She decided to open in the new home as quickly as possible and they began painting and sprucing the place up. She remembers ice storms for the next three weeks while they worked. She worked all day, joined by her cousin Inga and her mother. Goerge helped when he could. They opened on March 6, 2015 and after a month, George came over to work with her, quitting his job at Crown and Goose.

When it came time to name the place, her cousin’s suggested, “Jackie’s Dream,” telling her, “you always said you wanted to open a restaurant.” She says she doesn’t remember anything like that and that if she named it over, it would be “Jackie’s Blessing,” because that’s what the business has been to her and many others.

“God gave me a second chance to do what I love. This is considered the gun zone. For me to have the customers I have is a blessing. I have all kinds of cultures and races — all kinds of people.”

She operates it with her grandmother in mind. “She always told me to take as much food as I wanted, but to you always have to eat what you put on your plate.” She says she asked her grandmother why they always cooked so much food. “She said, ‘Baby, you never know when somebody will stop by hungry and you need to have something for them to eat.'” Because of that, Jackie says proudly, “I never cook a little!”

“Cooking is not a job, it’s a passion, what I love to do. You have to have a passion. Soul food or country cooking is all about love.” Saying she makes everything from scratch that she can, she says it was George’s idea to do hot chicken and, “that took us to a whole new level.”

In addition to the problems with the building, which do not seem to be abating, they’ve outgrown the kitchen, doing a lot with a little. She’s had to stop catering because the kitchen can’t support both the restaurant and the catering. They have to cook small batches repeatedly, whereas a larger kitchen would allow a much more efficient flow of larger batches. They are using a regular home chest freezer and have very little prep room (or room to soak the greens, as she said).

They are very excited to announce the restaurant will move to Old North at 1008 E. Woodland. It’s where the Coop Cafe used to operate and, as a result, the interior structure is perfect for what they want to do — including, but not limited to a full grease interceptor.

The catch is they need cash flow for the move and to purchase necessary equipment like an ice maker, tables and chairs, coolers, a bar and fryers. They also need money to make the physical move and to complete the painting and other small improvements. 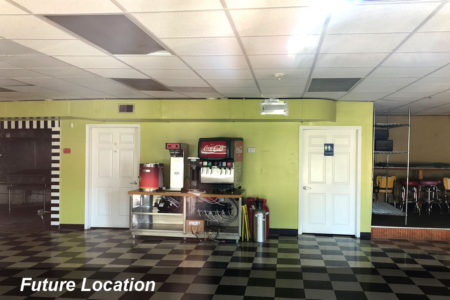 In an effort to make the change, they have started a GoFundMe campaign called simply, “Jackie’s Dream Moving Fund.” They are hoping to raise $20,000 to cover many of the costs and the campaign, which is only three days old, has already raised over $5,300. You can help support this great local business by chipping in a bit to get them to the new location.

Jackie’s parting words to me were, “It’s not hard to treat people the way you want to be treated.” Help her keep doing just that while spreading the love through her crazy good food.