A Homecoming at the The Corner Lounge 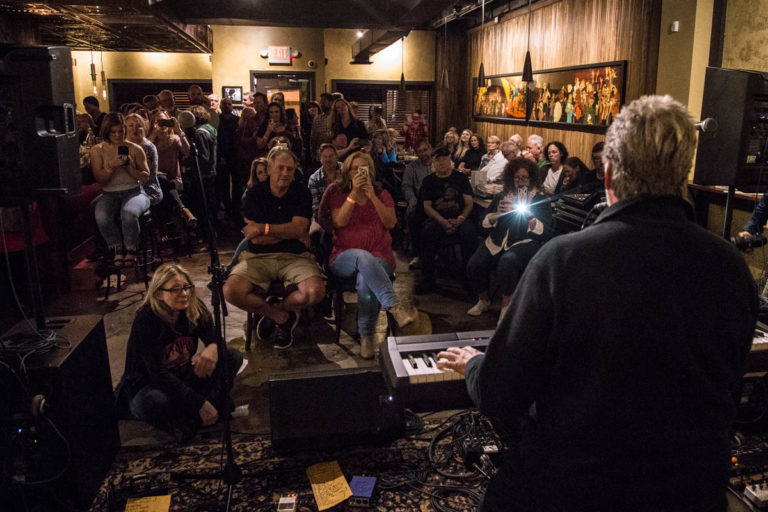 It was one of those special Knoxville nights. You know the kind: Great people you know gather with new friends to celebrate something essential to our city. Music is one of the ways we make this happen. Last Friday night at the Corner Lounge was one of those very special moments.

The show featured an early start time. Early start times have been a subject of discussion in various bars around downtown for quite some time. A large segment of the music audience either doesn’t want to or can’t wait until 10 PM+ for a show to start. The 7:PM start allowed for a two-hour, two-set show that ended just a bit after 9:00 PM, freeing the audience to get home early, continue enjoying drinks and friends or to catch a late show at another venue.

If you don’t know Mic Harrison and the High Score, but you value straight-ahead rock and roll with catchy melodies and intelligent lyrics, you are missing out. For pure rock and roll fun, check out their latest release, Vanishing South (2017). For the full effect of the current lineup, see them live. They’ve been joined by guitar-wizard Kevin Abernathy, making the band, along with Robbie Trosper, the best dual guitar-attack band in the city, if not well beyond its boundaries.

The house was packed from the beginning with many familiar faces on the Knoxville scene. Sisters Peggy and Holly Hambright were in the house, music writer and everybody’s friend, Wayne Bledsoe, Red Hicky and Mark David, and many, many more. Like a true Knoxville gathering, lots of hugs were handed out in every direction while the crowd soaked in the great music.

Several songs into the first set, Mic introduced a friend of the band and Mr. Hunley, who had been standing, dancing and grinning side stage, took a mic and with stories sprinkled between, launched into a set with the backing of the band, that included songs like his hit version of “Oh Girl” (#12 Country Charts, 1982) and “Livin’ on the Funky Side.” To say his voice sounds as good as ever might be an understatement. Strong and soulful, it may be richer for the passing years.

The stories about old times at the Corner Lounge were at least as entertaining as the music. He said he first walked into the bar in 1969 after being released from the army six months early as the Vietnam War deescalated. After sitting in on keyboards repeatedly, the owner told him if he was going to come around that much, he ought to play regularly on Thursday nights for tips and beer. He gladly accepted. It would be seven years later that he landed his first top twenty single.

Noting that the current crowd may be just a tad more of a “higher class clientele,” he told the story of owning a a 1957 Ford in those early days. He always tried to park pointing downhill because it required pushing off for him to pop the clutch and get it started. Sometimes, he said, it would take off a little fast and those pushing the car would fall to their knees. One young woman finally told him she was finished pushing him off after her knees got scraped up one too many times.

Saying that he was afraid he was being like Jerry Reed (with whom he toured) and talking too much, he couldn’t seem to help himself. One of the best stories was about a gentleman who entered the bar having already over-indulged. He ordered a jack-and-coke and demanded immediate service. After repeating this sequence several times he was told he’d had too much and would have to leave. He refused.

The woman behind the bar forcibly removed him via the front door. Just a bit later there was a loud crashing of tables and chairs falling at the back door as a man burst through and fell. Helped to his feet by other customers, she told him, “I told you to stay out of here,” to which he replied, “Damn lady, do you work in every bar on this block?”

Saying that he doesn’t play much piano anymore because “of these,” and he held up his hands, the keyboard was set up, nonetheless, and he moved into a killer version of “Georgia,” and a couple of others, ending the first set of the night. The crowd was about as appreciative as you could hope a crowd to be and the ones who talked around the bar were quieted by the other patrons. It was the moment the Corner Lounge came full-circle and back into its own.

The second set was introduced by Sarah Washington (who later took an impromptu (?) turn on stage singing with Mic, who wished long-term WDVX DJ Red Hickey and Mark David a happy 29th anniversary. It turns out they met 36 years ago at the corner lounge where it happened they had slipped in as under-age guests. Seems it turned out pretty well.

The band mingled new and old material, incorporating the newly invigorated lineup as if it was intended that way from the beginning. A solo song or two by Mic was followed by a raucous conclusion to a glorious evening.

Knoxville has an excellent local music scene. It’s a world unto itself, inhabited by many hard-working, incredibly talented and good people. If you’ve missed it, do yourself a favor and get out and hear some local bands. Your life will be the richer for it.

I’ll leave you with a couple of videos from the artists, each of them fairly recent. Check them out.