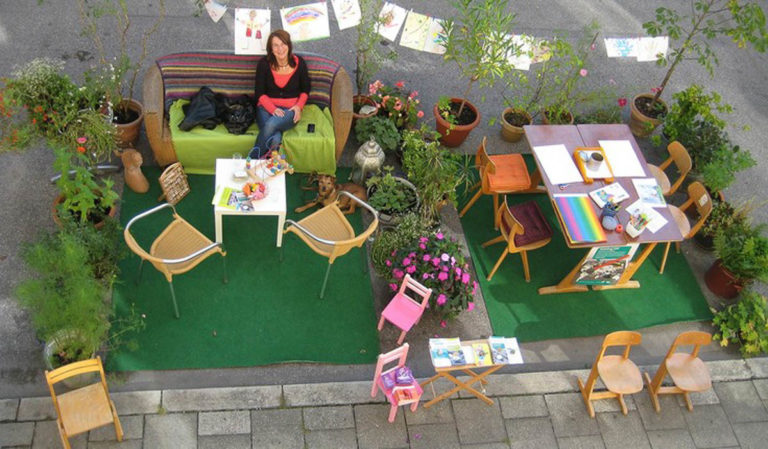 It’s a constant refrain in cities around the world: There just isn’t enough parking. What it generally means is one of two things or a combination of the two: “I don’t know where to find parking,” and “I want to park beside the place I plan to go.” Granted, parking beside the place you want to go may not happen. But is there enough parking? How much is enough? What impact does parking have.

How much is 5,000 acres? Consider the two graphics below. One has a 5,000 acre circle and the other illustrates it another way. Our small city has the parking equivalent of six Central Parks. Oren Yarbrough puts it another way, “It is enough to encompass all of UT Campus, Downtown, North Knox, and the South Riverfront combined.”

So, cars are a reality, what are you gonna do, right? They are just part of the city. But how does it alter the city? How does making destination spots for cars impact our space usage? Consider the next two graphics. In the first, you see West Town Mall and its parking lot superimposed on downtown. They are roughly equivalent.

Are we pleased with that? In the second, stunning graphic, look at the three charts and follow what the advent of the car has given us. Black represents buildings, red and pink represents parking and the blue/green represents new construction. Even with downtown’s recent, “boom,” Knoxville is still no where near the dense city it once was, thanks to cars.

So, we have an enormous amount of space given over to storing large steel objects every day. And when the parking lots are empty, what is left? A desert of asphalt. A hot, hard surface not hospitable to human habitation, nor friendly to the environment. A wasteland. Most people never think about all this. They just rail against the, “lack of parking.” But then there were a few people who decided it should be underscored.

In 2005, in San Francisco, Park(ing) Day was born to bring attention to these simple facts. Three guys, inspired by a similar idea implemented in New York City, took over a parking space in San Francisco, for two hours. Here’s what they did and what happened:

So one day in late September, the group found a parking space in a particularly gray part of downtown San Francisco, and converted it into a mini park. On what had once been concrete, they rolled out living grass, put up a bench, and placed a potted tree. Then they retreated across the street to observe the results, hoping their urban intervention was not an arrestable offense. Within minutes, a man sat down on the bench, took off his shoes, and began to eat lunch. Another person joined soon after, and the two began having a conversation. That’s when Bela and his collaborators knew they were on to something: “We created an opportunity for social interaction that wasn’t there before.”

That was the birth of Park(ing) Day and just a few years later, it has become an international event celebrated on the third Friday in September. It is currently celebrated on six continents, in 30 countries and in 183 cities. There has been a more-or-less informal celebration of the day in Knoxville for the last several years. UT architecture students took over a few spaces downtown. Rala went rogue and did it on their own.

This year, expect Park(ing) Day to explode on downtown streets. You can see the map below of expected parking spots given over to creative parklets. Presenting sponsors Shannon Foster-Boline Group and Realty Executives Associates came on board. ACS Documents added support and the East Tennessee Community Design Center, the East Tennessee Division of AIA and ASLA of Tennessee have organized it. The city has been a willing partner and the number of spaces has exploded.

The Nashville Civic Design Center (coordinators for Nashville Park(ing) Day have also lended support to Knoxville’s efforts. In addition to the fun of experiencing all the creativity on the streets, the groups will also have a friendly competition. The ETCDC will give out three Park(ing) Day Awards at their annual gala: The Meter “Made” Award (the best overall), People’s Choice Award (voting both live and on Facebook) and the Sustainability Award.

It all happens in parking spaces around downtown tomorrow (Friday) from 10:00 AM to 3:00 PM. Blink and it will be gone. I know many people have to work and this makes it impossible to witness the event. Hopefully, next year, the hours can be expanded into the evening so more people can join in the fun. I hope to bring you a look next week. It’s a fun spin on a serious topic.