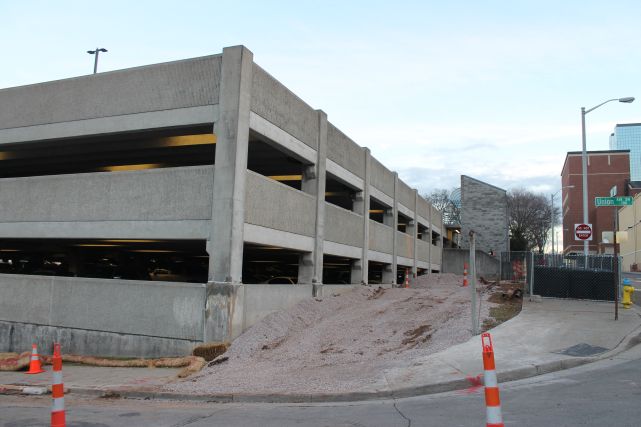 It was in last year’s city budget and it’s been a point of concern for a number of downtown residents who wonder about the impact on parking of the various hotel developments and the continuing growth in residential units. The city came before the downtown design review board this past week with details about the pending work.

The proposal includes adding two floors to the existing garage structure. When the garage was expanded in 2013, several improvements were made, including a covered pedestrian bridge from the garage to the Gay Street level of downtown. An elevator was added and extended to an additional floor of the garage. An outdoor escalator was removed and the project added about 260 parking spaces.

Most importantly for the current situation, the $6.1 million 2013 project also included funds for altering the supports for the garage to allow it to be expanded well beyond the scope of that project. The additional floors now set for construction are well within the capacity of the supporting structures and will not require expense required to support the expansion.

It’s a significant increase in capacity for the garage which went from just over 700 spaces pre-2013 to over 1,000 spaces after the previous project. This $9 million dollar project will add two floors, whereas the previous expansion included only one floor. The new capacity of the garage should be around 1,600 spaces, with 580 of them included in this project.

Also included in the current plans, extensions of the elevator and stairwells, but also installation of an additional elevator tower near the Central and Union intersection. Other changes include canopies over the entrances and – importantly – a straight, rather than angled entrance from State Street. This serves the purpose of making the entrance safer for pedestrians (turning vehicles will a have 90-degree angle to navigate), but will also allow entrance from two directions should State Street be made two-way on that block.

The new construction will match the old construction in materials and design and will bring the height of the garage to five stories on State Street and eight stories on Central Street. The building will also become ADA compliant, thanks to new ADA crossings at the entrances. Where the front of the garage once had annual art installations, the city’s Public Arts Committee has committed funds to a permanent sculpture installation at the site. An artist will be (and may have already been) selected to produce a seven-foot sculpture for the spot.

Marleen Davis, a member of the Downtown Design Review Board pointed out that the massive wall created on the north side of the garage by this expansion needs something to bring interest to the pedestrian experience. Rick Emmett, Downtown Manager with the city indicated the city is open to that possibility, but it didn’t sound as if firm plans are in place.

The timeline for the project calls for some work to begin next month, with the most visible work commencing in November and running through early March, starting along Central. During this period, road closures around the garage will begin, but access to the garage will be maintained. Single lanes on State and Central will be re-opened after initial closures. State Street will likely not be impacted until the new year.

Hopes are to finish the project by next June. As was the case in 2013, a blog will be maintained to keep the public up-to-date regarding progress on the project. The new spaces, the blog notes, come in addition to the 5,000 spaces, “currently available in city-owned parking garages, alone.”

One of the most intriguing features of the two expansions is the dangling possibility of additional growth. According to the blog:

The added half deck will be designed for a possible future build-out and sale of air rights; it will be compatible for either additional parking spaces or private-sector construction of up to four floors of office/condominium space.

At the height it will have attained after this project, the views from condos would be pretty compelling and demand would certainly support additional condo construction. That said, downtown has not expanded its office stock in the last decade or more and we may be approaching a time that will be necessary. It will be interesting to see if a developer steps up who has a vision for additional floors or if the city ultimately continues adding floors for parking.