Knoxville Pride Parade 2018: Rainbows and Good Will to All 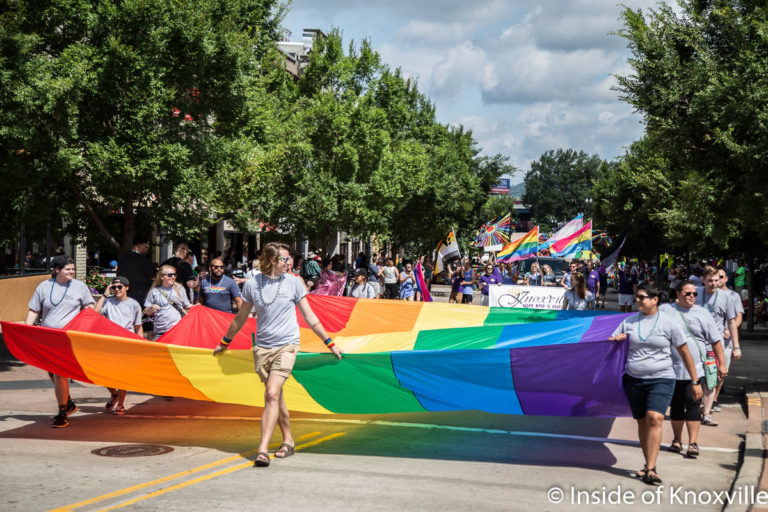 (I anticipated missing this year’s Pride Parade, so I asked Scott McNutt – past writer for the News Sentinel and Metro Pulse to fill in. As it turned out, I was able to attend, so I took the photographs. As always, there will be an additional load of photographs on the Inside of Knoxville FB page.) Here’s Scott:

Anticipating the arrival of the Knoxville Pride Parade 2018, the attendees waiting on Gay Street appeared happy and relaxed. This is notable, given recent history. This includes this month’s U.S. Supreme Court decision ruling in favor of a baker who refused to make a cake for a gay couple’s wedding; the rise in number of hate crimes in the U.S. for the second straight year; and the current presidential administration’s apparent indifference to the rights of anyone who doesn’t look like its members. The mood might have been fearful, apprehensive, or despairing, but good will seemed predominant at the parade route.

When I arrived at about 11:45 A.M., I observed old friends greeting each other with fierce embraces, a group distributing hugs to strangers free of charge, clusters of families sitting curbside, gaggles of teens and 20-somethings giggling, whispering and darting in and out along the crowded sidewalks, and new acquaintances chatting cheerfully. Attendees were of many races and many generations, from infants to octogenarians. No one appeared worried or concerned. Benevolence was abounding.

A significant police presence, however, underscored that, despite the crowd’s good cheer, security and safety were not taken lightly. Police officers pedaled past on bikes often, and patrol car lights could be seen up and down the route.

Where I stood (in front of the Art Market and Gallery on the 400 block of Gay), I counted about 60 people in the immediate vicinity on my side of the street and the opposite. This was at 11:50 A.M. As the parade approached about 20 minutes later, 60 had swelled to well more than twice that number, too many in fact for me to count, because the throng was too thick. From this observation, I couldn’t estimate anywhere near an exact attendance figure, but the crowd was easily thousands strong.

When the parade arrived, onlookers thundered their approval. With each passing unit of the parade, the merry roar of the crowd grew louder. I have attended several Pride parades and Christmas parades in downtown Knoxville, and I don’t recall ever hearing the crowd as loud.

A fire engine came at the head of the procession, followed by marchers bearing a Knox Pride banner and waving an assortment of flags, including those of some branches of the armed services.

Grand Marshal Ben Byers came next atop the back of a BMW convertible, then the Knoxville Gay Men’s Chorus and after that, an all-male flag-twirling troupe, colorful rainbow heart flags flying.

More groups followed, dancing, chanting, stilt-walking, hula-hooping and having a good time. The most amusing attraction had to be a motorized love seat zipping and bobbing crazily around, its three occupants squeezed in tight and holding on tighter.

As I watched the passing spectacle, a thought struck me: how remarkable it was that this occasion was so unremarkable. The Knoxville Pride Parade has been an annual event for over 10 years. It has the support of the Knoxville city administration. And, clearly, it is strongly supported by many citizens. It is an expected celebration. Its occurrence is normal (if never mundane).

Yet, 20 years ago, a parade of this magnitude celebrating gay pride occurring in the heart of Knoxville on Saturday midday would have been unthinkable. In 1998, an event of any magnitude on Saturday midday in the middle of downtown Knoxville would have been astonishing. Back then, downtown was often still little more than a ghost town. As a society, we may have a long way to go, but the 2018 Pride Parade’s tremendous turnout is testament to how far we have come as a city and a community.

Returning to the parade, several businesses were represented, including Club XYZ, Last Days of Autumn Brewing Company, Crafty Bastard Brewery, School of Hard Knox, Eyeglass World and First Tennessee Bank, among many others.

Some church denominations, such as Lutheran, Methodist, Church of the Good Shepherd and the Unitarian Universalist participated – a welcome sign that many in the faith-based community stand in solidarity with the LBGTQ community.

Candidates for political office represented in the parade included Democrats Renee Hoyos, Josh Williams, Linda Haney, Sheri Ridgeway, Jamie Ballinger, Rick Staples, Gloria Johnson, and Karl Dean. Many of the local Democratic candidates who had a contingent in the parade were themselves in attendance, too. The Knox County Democratic Party and the Knox Area Democratic Socialists of America had a presence in the parade as well.

Many other groups took part in the parade, some bearing messages. For example, the Church of the Savior United Church of Christ had a banner reading, “No matter who you are, you are welcome here.” Participants for Pagan Pride wore T-shirts with the slogan, “No one should live in a closet.”

Following is a smattering of other messages expressed in signs, banners, T-shirts and flags, carried or worn by both parade participants and spectators:

“God is still speaking, and the word is love”

Overwhelmingly, the sentiments seen were those of love, acceptance, and inclusion.

After about 40 minutes, the last parade vehicle arrived, supporting Trans empowerment. Then the onlookers began trailing after the departing vehicles, heading toward the Pridefest celebration.

However, as it chanced, there was one last sight to behold. Trailing behind the parade and the security escort came straggling six or so protesters, garbed in black and camouflage, a couple of them wearing masks. Surrounded by a security detail, they were a sad punctuation to such a joyous event.

Their presence also is a warning: As far as we have come as a society, progress might be reversed if hate is allowed to foment. Still, if the turnout for the Knoxville Pride Parade 2018 and the warmth and inclusiveness on display there were any indication, whatever setbacks may lurk ahead, love will eventually win the day.