Ryan-Ashley Anderson Spreading the Love with Smart and Becker 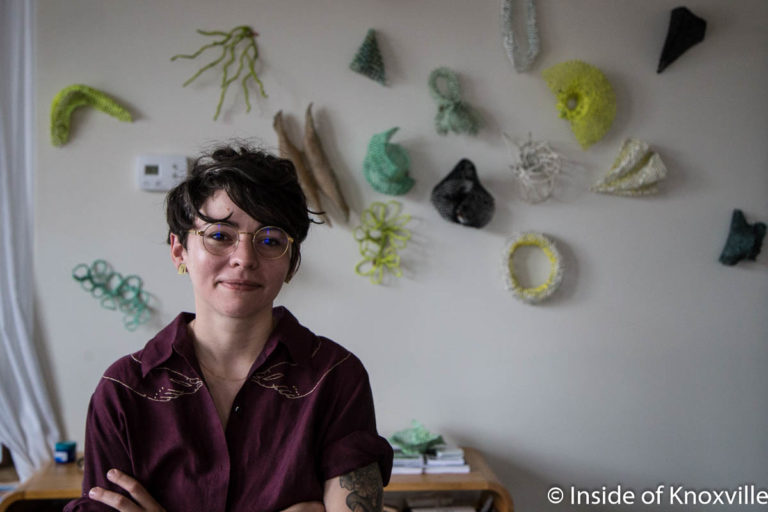 Ryan-Ashley Anderson has followed her heart into her own business and planted her flag out McCalla where east Knoxville meets downtown in the Electric Company Lofts Building at 1154 McCalla. When I first wrote about Electric Company Lofts, it seemed an unlikely extension of downtown’s fringes – and it was filled instantly. Retail in the spot might even seem less probably, but Ryan-Ashley is determined to make, Smart and Becker, her lifestyle retail business, succeed.

Born in Chapel Hill, she lived in small towns like Vass and Youngville in North, Carolina. Her mother is a Licensed Clinical Social Worker and her father is a dental tech. She was always drawn to creative endeavors and attended UNC-Asheville, where she studied creative writing. She started teaching knitting at age sixteen and by twenty-one she was doing a DIY class, began taking her work to craft shows and became affiliated with The Drygoods Shop in Asheville.

While she spends much of her time making jewelry and marketing the company, she continues to write. She says, “When I’m making, I’m thinking about writing and when I’m writing, I’m thinking about making.” Her writing extends from poetry to essays, memoir, and, of course, technical writing for marketing and websites. She does freelance writing, attends shows, makes jewelry, does personal writing and operates both brick-and-mortar and online sales.

While her time in Asheville was productive, she ultimately decided it wasn’t the place for her. While there she worked at a vintage clothing store which allowed her to display her jewelry. The owners helped her get into the Big Crafty craft fair, where she says she fielded an exceptionally ugly booth. She got better, she says, and pointed out that craft fairs and festivals offer great market research opportunities. Every time someone picks up a piece and doesn’t buy it, she tries to determine why.

That market research led her to a design featuring a silk cord and an adjustable clasp featured on her necklaces. She said she heard people talk about struggling with a traditional clasp or having issues with wearing metal, or finding necklaces their desired length. The design answered all the issues and has done very well.

The road to get here wasn’t so direct, however. She worked for the Human Rights Campaign and considered law school. She moved back to Chapel Hill to help care for her grandmother, expecting a brief stay, but found herself still there three years later, waiting tables and living on the edge of poverty.

She began studying copywriting and started writing for some local businesses. She took online classes and got a job writing for an agency in Greensboro, eventually moving to that area. As her economic stability improved she found her creativity re-emerged and her design sense improved.

It was a connection formed through LinkIn that landed her in Knoxville. The Tombras Group asked her to apply for a position in February of 2017. Two weeks later she moved here. The position didn’t turn out to be a fit and she got a position with Cellular Sales.

Then, she got an opportunity and took a chance. She asked to come to Nashville for a week for a possibility of being included on a realty show. That didn’t quite pan out, but it led to an opportunity to join Jewel on her Handmade for the Holidays tour. She quit her job and traveled with Jewel, making jewelry, selling it at the shows and teaching jewelry making.

She was also frantically making phone calls, plans and business moves. She knew she wanted to have a business of her own, so she took out her current lease, bartered with Bird on the Wire, which is a couple of doors down from Smart and Becker, for help on design of the new space. She made jewelry, researched and planned every day during the December tour, came back to Knoxville with a month to get everything ready and opened in February. The displays showed up the day of the opening.

Ryan-Ashley loves the space. She was leasing an apartment from Dewhirst properties and when she asked them about a retail space between 500 and 800 square feet, this is what they had. She loved it and hopes to use it in coming months as a launch point for bigger out-of-town shows. She wants it to be a place artists look back on as a turning point in their careers. She says having the brick-and-mortar spot has already given her added legitimacy and opened new doors.

She had one recent setback when her front door was busted and the business searched – she assumes – for money. Nothing much was taken, but the store was a mess. And then she got some Knoxville-style love. Derek White from Bird on the Wire Studios came over and boarded up the door. Paris Woodhull and Eli Frederick suggested she paint it until she could get the glass replaced and offered to paint it.

The group decided they would paint a positive message in response to the invasion. Daje Morris, Hope Brasfield, Joey Jennings, Lacey Sutton, Lan Nguyen, and Melissa Everett joined Paris, Eli and Ryan-Ashley the morning of the painting. While she cried at first, the event turned into a positive experience as everyone pulled together. She said,

I know what desperation feels like. I’m lucky to have this opportunity. How sad is it that I am surrounded by people who don’t have hope. Friends showed up and swept glass. Daje and Joey cleaned fingerprint dust. They brought doughnuts.

There are numerous ways to connect with Ryan-Ashley. You can find her on Facebook, Twitter, and Instagram. She has a personal website, as well as a Smart and Becker website. You will find info on upcoming events here (slip down the page to spot them). Of course, you can drop by the store, which is open Thursday through Sunday, Noon to 7:00 PM. It is also open for special events, classes, First Friday and by appointment.