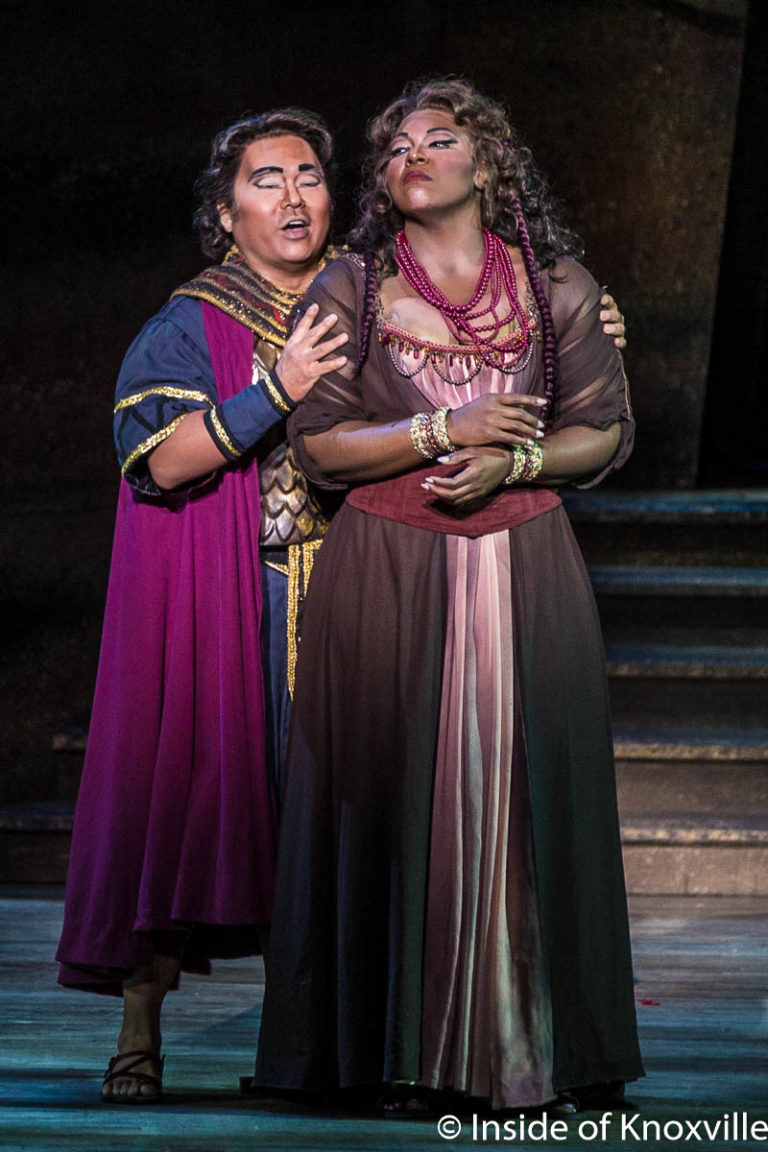 Knoxville Opera concludes their season this weekend on the heels of the Rossini Festival. Verdi’s Aida will be produced Friday night and Sunday afternoon at the Knoxville Civic Auditorium where productions were shifted this season. Seasoned veteran Dean Anthony serves as Stage Director and Brian Salesky conducts and serves as Executive Director.

Aida, a staple of opera companies world-wide, features music by Giuseppe Verdi and the libretto (lyrics to most of us) by Antonio Ghislanzoni. The music is the star in this production with simple sets and relatively repetitive lyrics. The story is simple enough to follow with a cursory preview of the outline, which is good, in that it frees the patron to listen, watch and enjoy without as much need for more than an occasional glance at the English titles projected above the stage.

Commissioned to be written for the opening of the Khedivial Opera House in Cairo, the production was delayed because of the Siege of Paris (1870-71), which prevented the transport of the sets and costumes. It premiered in Cairo in late 1871, but Verdi, unhappy that the general public was not invited, considered the next performance – in Milan in 1872 – to be the official premiere. Widely acclaimed from the outset, the opera quickly spread to opera houses across Europe and continues to be one of the most performed operas worldwide.

A couple of interesting notes on it’s history: First, it was performed in full, though divided into two broadcasts, on national television in the U.S. in 1949. Conducted by Toscanini, the performance was later released as an audio recording. It’s hard to imagine a full opera being broadcast on network television in subsequent years, let alone today. Also, the story, without the music, was used as the basis for a successful musical production by Elton John and Tim Rice in 1998.

Led by Radames, Egypt wins a victory over Ethiopia and, because of his love for Aida, he asks for freedom for the slaves from Ethiopia and his marriage to Amneris is announced. Prior to the marriage, he tells Aida the route the Egyptian army will take to their next battle with the Ethiopians and is caught, by Amneris, betraying his country. He is sentenced to death by being buried live in a stone tomb. Amneris realizes she has destroyed everything she loves and Aida voluntarily joins Radames in the tomb so they can spend eternity together.

The music in this production is among my favorite scores and the sets, while simple are elegant and visually appealing. The vocals are stellar throughout, though Michelle Johnson really shines vocally in the lead role. Small caution for people new to opera or those thinking of bringing children: this is a lengthy production. Final rehearsal ran right about three hours with three intermissions.

As always, there will be additional photographs (another 75 or so) posted later on the Inside of Knoxville Facebook page sometime later. Tickets are available here or by clicking the ad to the right of this article.