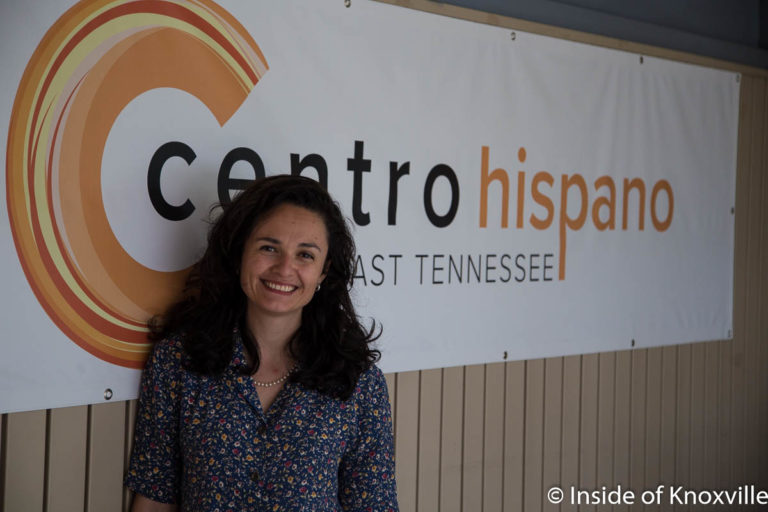 It’s a bit chaotic to the eye when you enter the Centro Hispano headquarters off Sutherland. The view of the city skyline outside is traded for people scurrying about, mingling Spanish and English as needed or desired. It soon becomes clear there is a focus and method to the madness as the staff and volunteers move quickly about the business.

Executive Director, Claudia Caballero, in between interactions with passing staff and while shuffling stacks of paper, explained that she not only wants Centro Hispano to be a cultural center, she wants it to grow into a cultural bridge for Knoxville. She points out that people who grow to really know each other can’t settle comfortably into negative stereotypes.

Centro Hispano has been around for fourteen years and is still evolving. Its original mission remains – teaching English to non-English speaking Knoxville citizens and integrating them into the larger community – but she wants to expand that idea and the reach of the small (she’s full time and three employees work 30 hours a week each), mostly volunteer organization.

She’s from Honduras, originally, where her mother was a Peace Corps vounteer from Illinois. Her father is Honduran, so she was born with dual citizenship and recognizes it as a privilege and it makes her want to help others who do not have that privilege. “As an American citizen you can do so much and do it fearlessly. This job has fulfilled me more than any I’ve ever had.” She considers herself, not just bi-lingual, but bi-cultural. The family lived on a farm with no electricity.

She says she’s learned Spanish twice. As a child, that was the language in their home, but when the family moved to Nebraska when she was five-years-old, she lost it as they spoke English. They made the move because her Honduran father, who works as a agricultural engineer and holds a MS from a Japanese college, wanted to pursue the American dream.

The family moved to Nebraska for his job and soon found that Nebraska in the 90s was not as hospitable as they’d expected. Her father felt he was treated like a second-class professional once co-workers and others heard his thick-accented English. He was also appalled at the system in place for bringing in Mexican agricultural workers for harvest and then having ICE come in and deport them, only to have the company bring them back illegally when they were, once more, needed.

The family moved back to Honduras when she was nine-years-old. She went from being home-schooled in Nebraska to public school in their Honduran Village. Her family had the only home in the village with electricity. The school was in a two-room building with one teacher and six grades. “The brightest child in each grade would teach the lesson to the others.”

She moved in with her grandmother after fifth grade and her parents soon moved to the same town. Her father worked for the government and her mother, who she describes as a “serial entrepreneur,” made pizza to help with a school fundraiser when Claudia was sixteen. The pizza was such a hit, the family opened a pizza business to fund sending the five children to college.

It required that each of them work doing all jobs at the shop. She and her sisters were shocked – no middle class Honduran children had to work until after college. The restaurant worked off family-only labor for the first four years, though eventually it boasted thirteen employees. She now sees that time as great life-experience.

While pursuing her BA in business, she continued working at the pizza shop and incorporated some of what she was learning. She learned that no job is too low, which is, she feels an important lesson for a leader. She also learned there is no stopping until the work is done – something that comes in handy when working for a non-profit. She often had to work until 11 PM at the shop and then work into the night writing papers.

After college, she had an opportunity to move to Germany as a part of an organization for which she’d volunteer for six years. She flew to Berlin, was told to take the train to the second stop and someone would be waiting.  The opportunity, which she describes as similar to the Peace Corps, though she says she didn’t have to work very much, kept her in Germany for a year-and-a-half. She didn’t learn German, which she seems to regret, and says she felt like an outsider, which she recognizes as an outgrowth, partially, of not learning the language. It’s something that informs her work, today.

She was offered a job in Orville, Ohio (home of Smucker’s) in 2011. She enjoyed her time there among Amish and other people, living there two-and-a-half years and meeting her eventual husband, Nathan. He was overseeing construction of a commercial kitchen for a non-profit and she volunteered. She says he was the worst volunteer coordinator ever and had her stapling insulation without proper training, resulting in having it all over her burning arms. He felt bad and offered to buy her a beer.

They dated for a year, he left for D.C. and he and another friend suggested she’d like Austin. She loaded her car and moved there. She got a pizza job, hated it, and went to work for a high-end ice-cream shop that had just started wholesaling. She loved her time in Austin, but decided to take a road trip with a friend to Mexico and told her bosses that when she returned she would be Director of Wholesale or she would quit. The position didn’t exist.

Nathan, fatefully, joined the Mexico trip. She returned as Director of Wholesale, negotiated for a higher salary and Nathan moved to Austin in 2014. He hated his tech job and the city, though she loved the music and food of Austin. He suggested they move to a smaller city with a lower cost of living. She agreed to move anywhere he wanted as long as it wasn’t cold. A tour of potential cities included Knoxville – really their first stop – and once she saw the Market Square Farmers’ Market, Three Rivers Market and lots of vintage stores – she knew this was the place.

She told him to get a job and then she’d move and work it out. He looked online for her and found the Executive Director position with Centro Hispano. She knew they’d never hire her – and then they did. They moved to the city July 2, 2016 and started their jobs July 5. They rehabbed a home in Vestal and moved in July 2017.

Nathan worked a couple of tech jobs before deciding to start a chocolate company – inspired by the beans his father-in-law brought from Honduras. His Unrefined Chocolate brand can be found at Farmers’ Markets and other places and he’s happier than ever making chocolate and living near the mountains.

Meanwhile, Claudia discovered Centro Hispano presented many challenges. The position had been open for a year. They’d been through five directors in two years. By the time she’d been there two months, the staff had left. The non-profit had gotten into a spiral of spending most of its time chasing grants and had not been extremely successful at that. She wanted it to be a more empowering organization.

A very supportive board member helped her shape the organization into a more sustainable model. She built relationships with the grant organizations and has developed good support from United Way and others. Her current staff, she says is a, “great team.” “The work is inspiring. I feel east Tennessee has not realized how much immigrants bring economically . . . Latinos have more buying power than any other minority group in the U.S.”

She points out there are many gaps in services and Centro Hispano has branched out to meet more of the needs. She mentioned a recent workshop on how to buy a house. A local realtor presented information on how to build a credit score and get a loan – concepts not common in their previous countries. The result of the seminar is that three attendees bought homes through the real estate agent.

Of the current Latino population in Knoxville, she says the last census said there were 10,000 in Knoxville and 20,000 if you include surrounding areas, but she feels this is far under-reported. Lonsdale Elementary, she points out, is over 50% Latino and some schools in Lenoir City are more than that. English classes continue to be a staple offering, but she notes they are much better, now, and they are tailored to understanding east Tennessee English, which is a shift.

The organization offers after-school ESL programs, helping students with homework – something their parents often can’t do because of the language barrier. They are also teaching parents how to interface with schools and they’ve started a Youth Leadership program, which she says is, “inspirational.” They’ve also developed a coalition of parents and students to communicate concerns and needs with the school system. They recently did a needs assessment which they will soon present to the school board.

She points out there is no one-size-fits-all description of Latino students locally. She says there are three distinct groups: Those who were born here, are citizens and speak English, but need help explaining college to their parents.

Second, there is a group of DACA and undocumented students with limited possibilities. They are not eligible for any student aid and they have to pay out-of-state tuition at Pellissippi or UT. They speak English and consider themselves American as it is all they have known.

Finally, there are those who came alone as children and live with a relative or friend of the family. They do not speak English and have very limited future possibilities. For them she worries about the appeal of violence and gangs. Overall, the vast majority of students in Knoxville are American born.

She also takes issue with the mistaken belief that undocumented immigrants drain the system. She points out that they pay taxes – often on fake social security numbers – meaning they pay into a system from which they will never get support. She says they want to pay taxes because it proves you are a legitimate part of society.

In 2009 the state of Tennessee took away the capacity for undocumented immigrants to get a driver’s license. She pointed out that this only prevents them from being as good a citizen as possible. Without a driver’s license, they don’t learn the rules of driving and police don’t really know who they are or where they live if they are stopped. And now they live in fear of deportation while continuing to work, purchase and pay taxes.

She worries about the long-term consequences of a large group of people with no hope or opportunity. She was discouraged when Project Grad recently came under fire. It has supported many Latino students. She laments that Centro Hispano isn’t big enough to truly help students with college.

So, they continue to do good works for those who need help and now they are also reaching out to the significant number of professional Latinos in Knoxville. Their major event of the year, the Latino Awards Gala will be held August 13. You can buy tickets here. You can also donate to the organization or volunteer. Contact them at (865) 522-0052 or
info@centrohispanotn.org.