Nest Closes: What Is Wrong With Retail on the 100 Block of Gay Street? 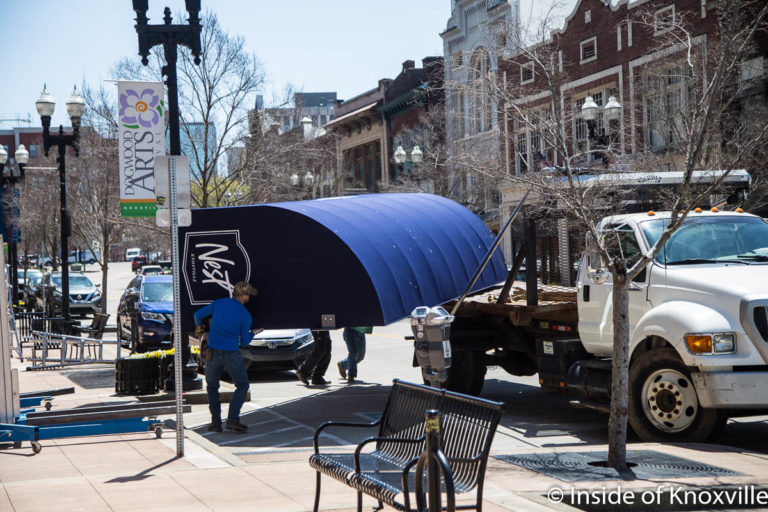 I started this website in June of 2010. In July I wrote my first article about the block. Then Mayor Haslam dedicated the re-opened, refurbished block which had undergone a dramatic re-working which had taken eighteen months, which was much longer than anticipated. I noted the special status of the block as the only spot in downtown you could refer to by number and not name and people would know where you meant.

The block seemed set for success. It was much more attractive, safe and functional than before the lengthy project. The block is on our best street. The buildings on both sides are beautiful. The west side is lined with a great variety of architectural styles, while the east is lined with the longest string of tall buildings downtown.

The other detail that suggests retail should succeed on this block above all others is that this is the most populated block in downtown Knoxville – and probably in east Tennessee. Given that, how could businesses not succeed? Think of all the foot traffic! If only the residents supported the businesses, they couldn’t fail, right?

That has not been the case. Retail on the block has struggled, never really gaining momentum in the subsequent eight years. The most recent business to close is Nest, which opened in July 2016. I emailed owner Natalie Stair asking her about the closure.

We were approached about someone taking over the space and w/ the baby and the impending construction on Jackson decided it was probably for the best . . .  We did pretty well…not great, but much better than even I had anticipated the first 2 years, but it was just difficult to run without me being there every day. I am very, very sad to let it go and who knows what the future holds though in terms of relocation? Despite its challenges, I absolutely loved being downtown and had a blast and learned a lot!

As with so many of the other closures  on this block which I have covered in the last eight years, there are various reasons involved in each case. Still, there is a thread and it is a lack of business. In the years following the upgrades to the block, I’ve covered the closings of restaurants such as 11 Cafe, Holly’s 135, Shuck, Harry’s and Havana Nights. Some restaurants and retail, such as Patricia Nash, Slamdot, Attack Monkey Productions, Wells Fargo Mortgage and Nama  have left the block for other locations. But retail losses reflect the real level of carnage: Bula Boutique, Lululemon, Nest, Bootleg Betty, James Freeman Interiors, Unarmed Merchants, Style of Civilization, Gallery Nuance, Urbhana and likely others I can’t recall.

To be sure some businesses have succeeded. Cru Bistro has been on the block for years and Knox Mason has been a long-term success, although they have announced intentions of moving to another Gay Street location. Sugar Mama’s has remained open for almost two years. Services seem to do pretty well: Meadowsweet Massage and Wellness, for example. Nouveau Classics has done well and CBI has been around for several years, though each of these are not dependent on foot traffic. It’s the same with The Village. Other businesses which seem to be doing well are service businesses: Painting with a Twist, Bat n Rouge, Culture Hair Studio.

So what’s wrong with retail on the block? We’ve talked about it before and the most common answers focus on the massive divides on either side of the block separating it from the rest of downtown. The viaduct looms to the north and, most damning, the missing 200 block creates a gulf to the south, with a winding, inordinately wide Summit Hill making pedestrian spillover traffic from the more active portion of Gay Street less likely.

A makeover of the former “Country Music Park,” is underway, but unless that lures pedestrians toward the 100 block or we finally do something about the surface parking on the western side of the former block, foot-traffic isn’t likely to improve. I know the parking lot is tied up for a generation, but there are ways to do swaps or build an underground parking lot to satisfy the lease while repairing the block overhead.

A visionary project like restoration of the 200 block or, at the least, a reduction of the inappropriate suburban boulevard that is Summit Hill, is likely required to see a major improvement. Do we have the vision and the boldness to undertake what would likely be an expensive and politically difficult undoing of past damage in order to repair the fabric of our downtown and make the 100 block a viable place for business?