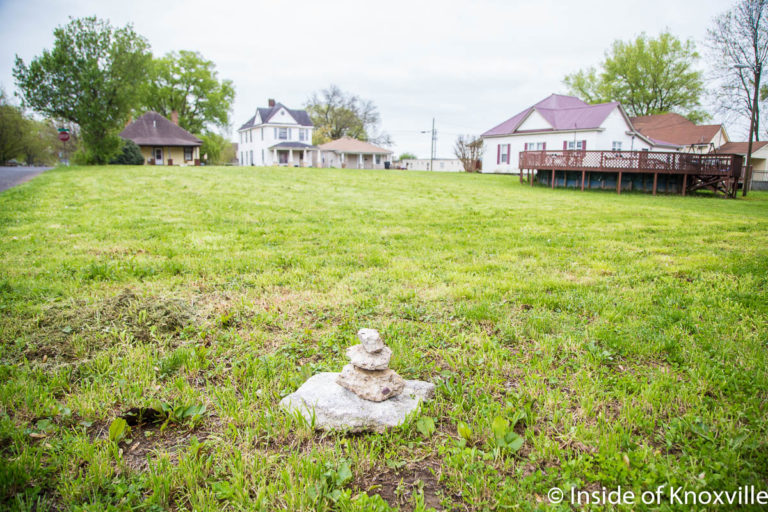 In a recent article I mentioned the fact that there are numerous slivers of land – many of them in older neighborhoods where lots were once smaller and current codes do not allow construction of a home – sitting idle and unused or unusable. These gaps in neighborhoods can become blighted and problematic. But what if they could be transformed into a community asset and connecting point?

It’s a thought that, interestingly enough, had been running around in several people’s heads as they saw a piece of property at 131 Burwell, just off Central Street, sitting empty. The city had assumed ownership of the lot and it had failed to sell for back taxes. An auction was looming.

Colton Kirby had helped his wife, Tiffany, cultivate a garden in their backyard. He says he enjoyed the work and she had the talent for making a garden grow. They wondered if it might be possible for their community to have a garden. They lived on Burwell and had noticed the lot going up for auction and hoped someone might do something useful or cool with the lot. Then they began wondering if it might be possible for them to do something really cool there for the community.

Speaking with a friend one day at Wild Love Bakehouse, the friend pointed Colton to a guy across the room who had had his eye on the lot with similar intentions. Conversations followed, a dream emerged and a group including Colton and Tiffany, John Human and Benjamin and Molly Conaway came together to purchase the property at auction and launch a plan.

The group established the non-profit Cultivate Wholeness and set the first project for the group as establishing gardens on that vacant lot. Oakwood-Lincoln Park’s Burwell Gardens will offer an opportunity for community members (and others if space allows) to grow healthy food for themselves and for others.

The first phase of the project includes installation of raised bed garden plots which will be made available for a fee. A sliding scale will be used to help those who can’t afford the full fee. The food raised would be owned by the person paying  for the plot, though they are considering a voluntary program for food sharing. Proceeds from this and other potential income would go back to the non-profit to improve and support the garden – with the potential to expand into other, similar community-minded efforts.

At this time, the group is thinking of the plot in thirds: The front third would be for raised beds, the middle third for a fire pit and perhaps other amenities for those working the plots and the back third for a future large garden plot. The large garden plot would be operated by the non-profit with food potentially being sold to restaurants or at local farmers’ markets with the idea of returning the funds to the organization for use on this project or others.

Colton says the bottom line is the group is passionate about people and about community and this is a way to go about helping others. It’s their version of making their community and, in turn, our city a better place.

You can get involved in several ways. Want to donate work or supplies? Want to inquire about a garden plot? For these and other inquiries, email cultivatewholeness.olpn@gmail.com. In the short term, they need money for “boxes, fence, water line installations, filing of permits . . .” If you’d like to make a donation, support their Go Fund Me Campaign.