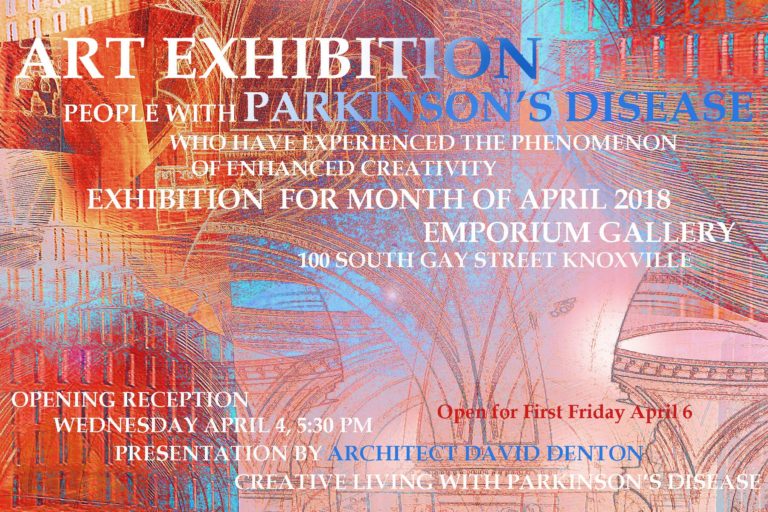 Many of you know David Denton, retired architect, personally and many readers of this site know him for his previous articles published here. You may not know he has a diagnosis of Parkinson’s disease. In this article he explores the possible link of the disease to creativity and an upcoming exhibition that explores the theme.

“I am almost glad to have Parkinson’s disease: not quite, but almost.”

I never imagined I would utter those words when first diagnosed with Parkinson’s disease fifteen years ago. At the time, I frequently heard people in the medical field refer to a certain personality type that seemed prone to get Parkinson’s and that creativity was one of the primary characteristics Then an article popped up on my screen one day that stated if you are in a creative profession, Parkinson’s disease may be a blessing in disguise as researchers have found that patients with this disease become more creative than their healthy peers. Astounded at this revelation, I proceeded to explore this further.

I learned that recent research has shown that what is really happening is that the disease, coupled with the dopamine-based medication, is actually causing people to be more creative. Many people who have experienced this phenomenon often report that after being diagnosed, they took up creative activity for the first time in their lives such as painting, poetry, or photography.

I was astonished to learn this, as it explained what had been happening in my life in the last few years: an almost obsessive urge to create art. I had experienced what scientists have discovered, which is that when involved in a creative activity, the brain produces more dopamine and the symptoms are reduced. They also found that as the disease progresses and the medication is increased that the level of creativity increases also. Being an architect, I have always been involved in creativity, but have never experienced a surge such as this. All of my art is now produced digitally, much of it in the virtual world, as well as photography. When I was first diagnosed I realized that my practicing architecture would be curtailed because of inevitable disabilities. There was no way to know how soon the disease would progress; therefore I realized I had to prepare for the worst case scenario, that the progression would be quick.

Searching for a way to deal with this impending situation, I learned about the virtual world, specifically the platform Second Life™. I realized this was the opportunity for which I had been searching that would allow me to continue to be involved with the creative world, which has proven to be true.

At the time, I was living in Los Angeles and working on projects in Egypt. Avoiding those long, exhausting flights became possible by collaborating with the Egyptian architects via avatars in the virtual world. This progressed to developing an exchange program funded by the U.S. State Department for American architecture students to collaborate with Egyptian students.

Perhaps the most significant application of this new technology to my situation was participation in founding a support group for people with Parkinson’s disease, in the virtual world. People come from all over the world in their avatar form. The group has been meeting weekly for over seven years. In the last year the group met in San Diego for the first time in the real world not even knowing what the others looked like in person. This experience was profound. The virtual world is proving to be very beneficial to people with disabilities. Dr. Michelle Brewer, my neurologist, asked me to help her organize an art show that would display some of the art produced by her patients. She was not surprised to learn of this revelation about creativity in Parkinson’s disease, as she had noticed for many years the prevalence if creativity in her patients.

The exhibition will be at the Emporium Gallery in downtown Knoxville for the month of April. The opening event will take place April 4, reception at 5:30 pm. I will speak at 6:00 pm about my experience and the other artists will be on hand to discuss their personal experiences. The exhibition will then go on the road to places such as hospital lobbies.

The goal of this project is to make people with Parkinson’s disease aware that this phenomenon might be happening to them, even though they have never thought of themselves as creative.  Exploring this creative possibility can result in people with the disease discovering a source of satisfaction and relief from the symptoms.

Ed. Notes: You’ll notice a new tab at the top of this page for “Video!” I have placed the five videos published by Knoxville Weekend of my series with Jack Neely, as well as one of my segments with WVLT. I’ll be adding more in the future and it will serve as a permanent repository for the videos on a wide range of historic and contemporary topics.