Riverwalk at the Bridges (Baptist Hospital Site): The Latest 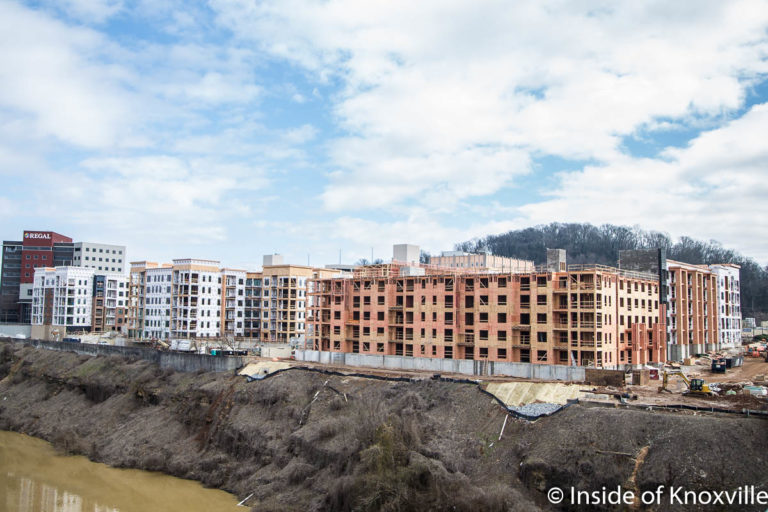 It’s another example of projects that take much longer than planned, often for multiple reasons, but do eventually come to fruition. It’s easy to dismiss ideas and plans that have been long discussed as no longer happening, but, for many, it’s simply a matter of perseverance.

I’m not sure you’ve noticed or even taken the risk of walking or driving around the construction recently, but it is becoming clear that the end is in sight for the $160,000,000 project. The interior garage has fallen out of view in the interior of the building which is rising in every direction. Brick is being applied to the facade along Blount Avenue bringing the final look of the building into better focus.

It seemed like another good point to check in with the ever-patient Mr. Mills for an update. I found him, not-surprisingly, pretty upbeat that the end is nearing. He told me, “I’m overwhelmed with the quality of the views from some of the units. Expectations have been exceeded in every way. The floor to ceiling windows offer great views of the skyline and the stadium.”

I asked something that has been on my mind for sometime about the project: Do you wonder now if they might have been better offered as condos? He said “absorption rate,” is a concern for a project of this size and that the units will be occupied much more quickly as apartments than would have been the case had they been sold individually.

Initial response, he says, has been strong, though he didn’t preclude the possibility of the units being converted to condos at a later time. He feels the apartments serve the needs of the community at this time and he’s focused on maintaining high quality in the construction of the homes.

Regarding why the development has taken so much longer than anticipated, he said labor, for one thing, has become much more scarce due to the improving economy. It makes finding high quality sub-contractors more challenging. The fact that the company has been around for forty years developing relationships with businesses who can provide the needed labor has allowed them to continue construction while maintaining their standards. He really feels it may be Knoxville’s, “finest apartment development.

He said cooperation with the crews renovating and reconfiguring the Regal Building has gone well. It will be that end of the apartment project that is opened first, meaning as the Regal building is completed, the combined sites will be completed from east to west between the bridges.

The units on that eastern end will become available from the top floor down before moving to the section just to the west as it progresses across. They’re having to maintain access to the river (or northern) side as long as possible, but additional units will become available weekly after the first ones are open. He expects the first residents to move into the homes in May – which is very close to what he’d told me a year ago.

The group also owns a vacant lot, which previously held a small, run-down hotel, across Blount and adjacent to Chapman Highway, as well as an older office building beside it. He said they are just now starting to pursue plans for that tract and have been getting good response from a national chain for a probable hotel. The other building is trending toward retail and restaurants and the group has gotten interest in both regards.

He concluded on a positive note, “We think our development, along with the quality student housing and the Regal International Headquarters will serve as a catalyst for a renaissance of south Knoxville.” If you’re interested in pursuing a lease on one of the new homes, you’ll find the contact information here.