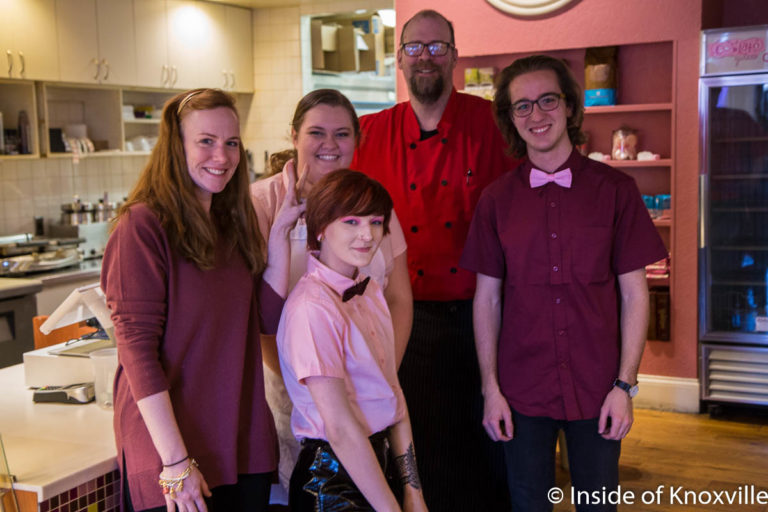 Coolato Gelato has been a part of downtown at 524 South Gay Street since 2009. In downtown years, that’s a long time. Original owners Allen and Cherryl Meuret guided the restaurant into 2017, selling it late in the year to Julianna and John Texada. Julianna is taking the lead and has already instituted major changes, with many more to come.

I spoke with Julianna who said she and John had long been interested in owning a downtown business. When she heard Coolato Gelato was on the market, she pursued it immediately and the couple took ownership last July. Having worked in restaurants before, she understood some of what she was taking on and soon realized she needed someone to focus all their energy on the food, freeing her for management duties. She found that person in the form of Chef Kevin Mader.

Chef Mader, originally from Florida, worked as a chef for Disney and at Gordon Ramsay‘s BLT Steakhouse in Miami. A member of the American Culinary Federation, he served an internship at Le-Bec Fin in Philadelphia. Following his interests in an effort to continue learning, he served as Chief Pastry Chef for Norwegian Cruise Lines. Originally hired as a sous chef, the Chief Chef handed him the keys and a recipe book and walked out on his first day – giving him the position and a steep learning curve.

He and his wife, who is currently an Interpret Zoo Keeper at Zoo Knoxville, honeymooned in Knoxville in 2007 and felt they would like to retire here. When his wife saw an opportunity for her current position in 2014, they decided to make the move early. He served as head chef for Aramark at UT until the position at Coolato Gelato opened, joining them in January.

He’s working his way through the offerings and has already begun to bring his talents to bear on the restaurant. He’s a certified chocolatier and you’ll see that in his creations. He’s using his grandmother’s recipe for the cannolis and they are exceptional (I sampled on your behalf!).

He’s asserted himself in the gelato production, introducing new flavors and flavor combinations. The restaurant uses a hot method to produce the cold confection – something that isn’t common. The group is supplying gelato to the Oliver Royale and you may see it pop up other places, as well. They also have gluten-free gelato and canine-friendly gelato.

Plans for the place include expansion of their catering business and, to that end, a full commercial kitchen is being built for their use in Emory Place. Hannah (pictured with the funky pink eye-shadow) is the catering director and you’ll also be eating her grandmother’s recipe if you enjoy one of their brownies. They are making macaroons from scratch and you’ll find a selection of house-made soups including Chicken Toscana, Tomato Basil and a chef special.

Chef Mader said he wants the experience to be different than guests might find anywhere else locally. He intends to bring the flavors “found in European cafes and pasticcerias.” He referenced combining, “old school recipes with new school flavors.” He mentioned blueberry and lavender or a combination of curry and chocolate he’s working on. Illy coffee and espresso is now being served and their equipment is being used and he said there’s only one other Knoxville location using it.

The restaurant offers much more than gelato, coffee and confections. Quiches made in-house, including vegetarian-friendly versions and an expanding salad list are available. Paninis and sandwiches are also served. Wine and desert  liquors will also be available soon, giving adult patrons new options. Seating will be expanded on the patios and table service is an option being considered for the future. Chef pointed out that he will be shopping for as much fresh, local food as possible, saying you can expect to see him at the Market Square Farmers’ Market.

Breakfast is coming soon, as is expanded hours. With the expansion of dessert offerings, Julianna says it could be considered a dessert bar. She wants it to appeal to different groups at different times – a breakfast and lunch spot, a gelato and confection spot for all ages and a more adult spot later at night with excellent wines, limoncello and prosecco and ports.

Julianna says the intention is to give Chef Mader the latitude to do what he does best. Saying she wants, “him to be creative . . . keeping what customers have loved, . . . but moving in new directions. To that end, you’ll also see a new look very soon. The restaurant will close February 19 and 20 (and 21, if necessary) in order to completely re-decorate. Original designer Robin Easter returns to the space with inspiration provided by British Baker Peggy Porschen.

You’ll find new paint, lighting, cabinetry and some tiled surfaces where the original floor has been damaged. The look will be, “higher-end, stream-lined, but still pink.” Chef Mader is taking on the windows and he says he wants them to, “stop people in their tracks.”

New hours and breakfast service will begin in March. Hours will expand to 8:00 AM to 10:00 PM, Sunday through Thursday and 8:00 AM to Midnight Fridays and Saturdays. In the meantime, watch for the transformation and drop in and check out the new menu and delicacies.