Pretentious Beer Company Now Has Its Own . . . 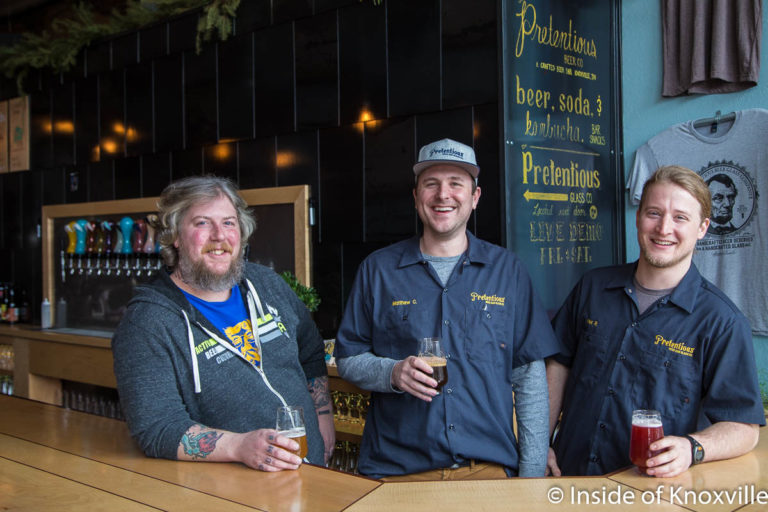 Mmm, what would it be that a beer company might want of its very own? As it turns out, owner Matthew Cummings laid it out for me the first time we talked: First there was glass art, then there were beer glasses, a glass blowing studio was followed by a bar and the bar would ultimately be followed by . . . their own beer. And now that moment has arrived.

The crew at Pretentious Beer Company; Alex Rich, who is charge of the brewing process, Will Brady who is in charge of the mechanical operations and Matthew Cummings who is the designated mad scientist – no one is “the brewer” – is very happy to announce they are brewing a wide range of beers and you are welcome to come in and have a taste for yourself.

I sipped a Cherry Lime Soda (tasty!) and chatted with Alex, who previously worked at Smoky Mountain Brewery for four years. He also spent those years homebrewing and reading. As he put it, “Then I popped over to make some magic.” Will interjected that Alex, “was the only one on the list.”

Alex explained his interest, “One reason I wanted to come here is we’re not doing the same thing twice. We’re doing Belgian and mulitple strains of yeast. We’ve probably done sixteen different beers and probably used ten different strains. Working in this part of town was also an attraction to me.” It should be noted that “this part of town,” includes Culture Hair Studio owned by his fiance, Liv Halcomb. They’ll be married in March.

He said his craft beer journey began when he came of age at Mellow Mushroom and began appreciating the different taste profiles of the various craft beers. He became fascinated, but didn’t think it could be a job. He attempted to enroll in the South College brewing program, but was too late for the start of the semester, so he went to all the breweries until he found “grunt work,” and began learning and working his way up. “I like that you’ll never know everything. I find it fascinating that it is mechanical, art and science.”

He says the new brewery will not be attempting to recreate recipes, but rather will take an experimental approach. “Every batch we brew is split into two fermenters to make two completely different beers.” At this point the brewery has twelve different fermenters and may add others in order to be able to brew lagers. They will remain, by design, a micro-brewery, serving their own beer and providing it, possibly, for only a few other locations.

They served their first in-house brewed beer New Year’s weekend and they are naming, completing signage and preparing for a Grand Opening on January 20 with full taps. All taps will include various Pretentious beers and two will include collaborative beers – one with Alliance and one with Crafty Bastard. They can brew nearly a thousand gallons a month and the grand experiment to see if that is enough will begin very soon.

As a part of the larger picture of the experience, consider: When you enter the bar, you’ll see stools, tables and a bar built in-house. You’ll see the production portion of the room – all built in-house. A member of the team will reach for a tap made of glass blown in-house, filling a glass made in-house with a beer made in same room where you stand. It’s very organic and probably not replicated anywhere else on earth. Think about that.

As you begin to explore the beer, you’ll find a wide range of well-made beer with fun names: “Smokey and the Bandito,” a Mexican Rauchbier, “For Lack of a Better Term,” West Coast Style IPA, “Mr. Esquire, Sir,” a Belgian, “Sultry,” a Raspberry Hibiscus Blonde, and “Booch Hooch,” a Kombucha/Beer Hybrid.” It will only grow from there.

The crew is busy getting ready for the influx. So many people already know them and appreciate what they do – and now, what everyone has waited for is about to happen. Will, a former tattoo artist was busy making funny and funky signs explaining each beer. They’ll be hung above the taps. He summed it up by paraphrasing Kanye, “Our life is dope and we do dope shit.” At that, everyone fell out laughing. He didn’t believe I’d quote him. Still, there’s no denying: this crew is doing good work and they’re having a blast. And that’s not a bad life.

Join the fun. You have several chances: Tomorrow, January 11, join the Kick the Kegs Party, with 20% off all guest taps as they make way for Pretentious Beer. January 20 will be the Grand Opening of the brewery with all the new beers and, if you’d like a chance to sample some of the new beers with some great food, try the Pretentious/Oli Bea Beer Dinner on the 24th.

Check them out one way or another and recognize how bizarrely unique and cool this operation has become. No other city has this. Not one.