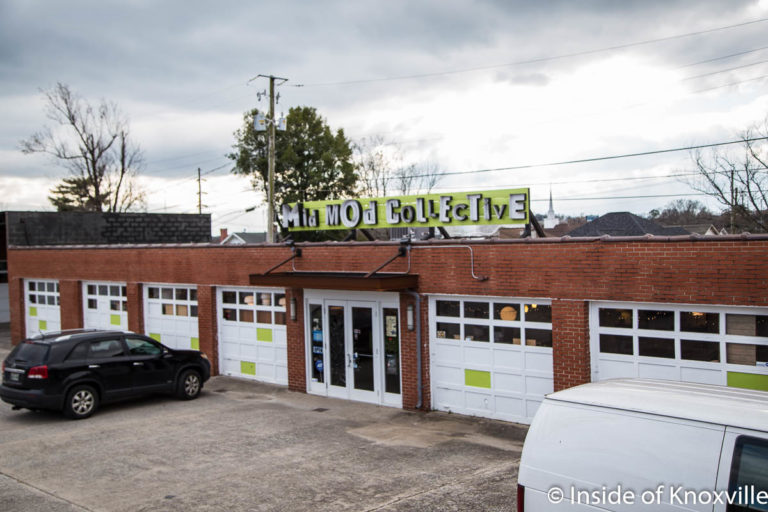 Well, two of them celebrated and two of them expanded, but the point is when locally owned businesses thrive, celebrate anniversaries and expand, it is a very good thing for us all. These are three businesses that have been well supported over the years, represent a work of passion for their owners and deserve many more years. A December 10 event celebrated their success and their plans for the future.

Of these businesses, The Book Eddy is the oldest. Started in 1991 by book lover John Coleman, he’s seen the business through many incarnations and locations – including a stint at the Holly’s Corner location discussed here a couple of days ago. While he maintains a warehouse on Jennings (soon to be moved), he’s found a home at 1621 North Central, just behind Wild Love Bakehouse and he’s consolidated his stock at that location.

Previously a part of Mid Mod Collective, as of December 1, The Book Eddy, once again, operates as a separate business at the new location, which is situated between Wild Love and Mid Mod. While he and partner Eleanor Scott are on premise Wednesday through Sunday from 11:00 AM to 6:00 PM, the store is accessible during Mid Mod hours through their space.

The business actually started life as the Old City Book Shop where it was located for a dozen or so years (exact dates for the business’ changes have faded a bit). Online sales started in 1995, but John says he always backed off online sales when they threatened to surpass sales at the store. He finally acknowledged the modern force that online sales have become and now a majority of sales happen that way for the business. You can check out his online collection here.

Still, he describes the business as, “old school analog,” insisting that some books need to be looked at before being purchased. He points out that book sales are only one part of the business, with ephemera being a large component via such formats as old magazines, advertising and sheet music. He’s not so much for anything with a barcode involved.

He continued, “Just because people say books are dead, doesn’t make it true.” He points with pride to a 4’X6′ bookshelf filled with poetry, noting that poets have never sold well in any era. “The most important thing for me everyday is to not be bored.”

Mid Mod Collective is celebrating three years in business and they, too, are expanding. The group is currently comprised of partners Allyson and Christopher Virden, Shannon Bedwell, Blake Deal, Thomas and Robin Miller, Cheryl Holcomb and newest member, Todd Witcher of Retro Salvage. ‘

They’ve also now leased the 3,000 square foot warehouse space running parallel to Wild Love Bakehouse and they are using it, not only for storage, but also for repairs and refurbishing. Much of the furniture on the floor at Mid Mod came to them in less than perfect condition and they restore it as closely as possible to its original condition. They also reupholster many of the pieces.

The new space will also include a station for photography as much (35%) of their sales come via Instagram. Allyson pointed out that following them there is really the best way to have a chance at scoring new pieces, as once they hit Instagram, they often don’t make it onto the floor before being purchased.

Allyson said that often people will ask whether “mid-century modern,” as a style will continue to be popular and she said she firmly believes so. Chris chimed in and pointed out that it is still used in futuristic movies because even though it is now fifty and more years old, it still feels very much futuristic. He also pointed out it was one of the last eras to this point to have a single distinct style of furniture. It’s well-made, functional and has a design that has stood the test of time.

The store also features Native-American jewelry and lots of glassware and bar-ware, which Allyson helpfully pointed out, makes great Christmas gifts. They are also currently bringing in more art. Both Mid Mod and The Book Eddy are interested in talking to you about what you might want to pass along to the next person. While both businesses are discerning, they are both, also, acquisitive.

Wild Love Bakehouse just passed the second anniversary of the announcement of the location they currently use, but co-owner Meg Parrish had been baking under the name prior to that point. The location, Meg and Shaun’s second (they own and operate Old City Java) was a smash success out-the-door and has continued to go strong for nearly two years. The couple also recently announced a third location called, “Pearl on Union,” which, as you might guess, will be located on Union Avenue in the heart of downtown.

Check out these and other local businesses and support your neighbors as they provide jobs, return money to the community and make each of our lives a little more enjoyable by doing what they do.