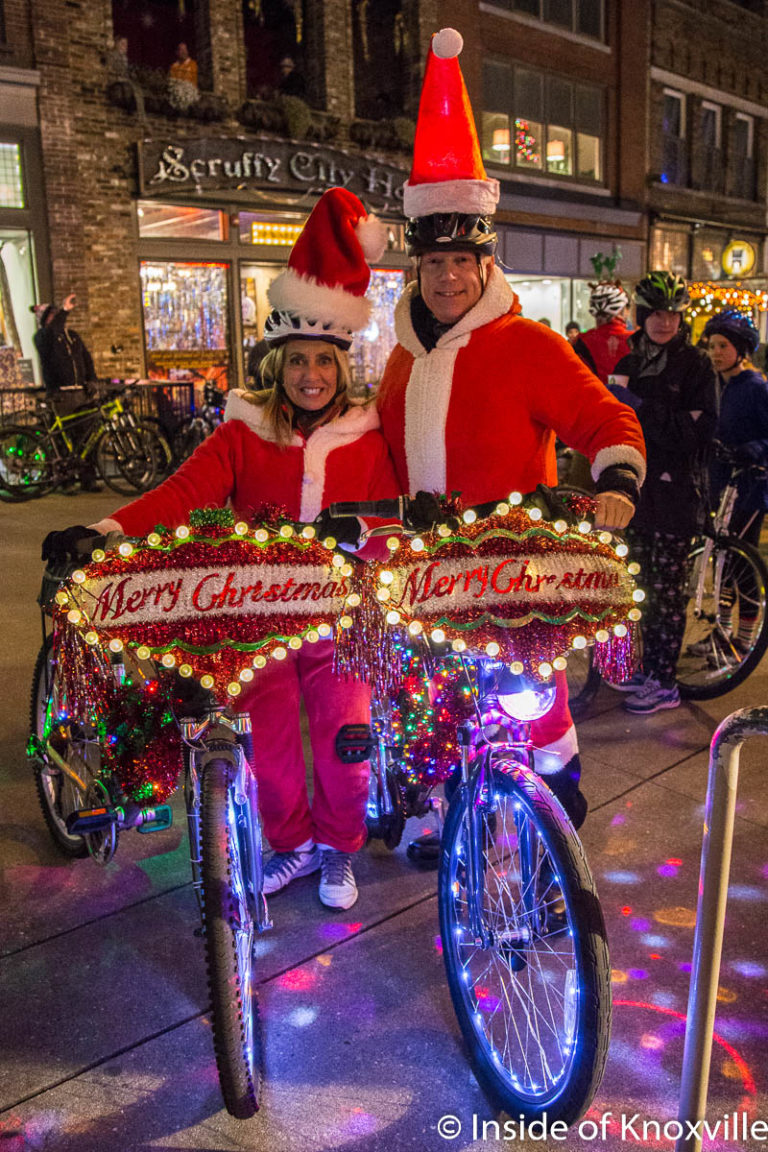 Long-term readers know  Tour de Lights is one of my favorite annual events. It combines creativity, holiday festivity and cycling and it’s like no other event during the year. I’d love to see some of the creativity on display here bleed over into some of our other parades.

As has been the case the last several years, estimates vary, but “over 1000,” seems like an easily verifiable number. The variety in that one thousand participants is as striking as the number: Male, female, young, old, families, fancy bikes, modest bikes, unicycles, recumbent bikes. There is some of virtually everything among the people and the bikes involved.

In looking for trends or changes from past rides, I would say I noticed a couple, though it may just be where I was standing along the route or what I tuned in to. First, there seemed to be a lot more carts behind bikes, some far more elaborate and others more simple. I assume they were covered tightly for warmth but, if so, I wondered about breathing holes. I’m sure not to worry, but it was interesting. The other thing about the little carts is I wasn’t sure which carried children and which carried animals.

Another thing which I’m pretty sure was different was the number of spectators. This was the first year it seemed like more of a parade, to me. Crowds near where I stood cheered the more creative bikes and the cyclists who did tricks of one kind or another. Lot’s of “Merry Christmas,” wishes went from the observers to participants and back again. It really is a great spectator event for those of us who might not deck the bike out with lights on a cold December night.

And it was cold. I suggested to Kelley Segars of I Bike Knox that weather forecasting could be a next career move for her because the night seems (I’m sure this is in my head) to be the coldest night of December every year! I could be wrong, but the pain in my hands after taking the photographs you see here seemed very reminiscent of the pain I felt last year. The night before and the night after were warmer, I believe. Just sayin.’

The massive Santa balance on a bike drew the most gasps as it passed. It really is a marvel of engineering to those of us who are decidedly non-engineering inclined. Lots of others were creative, as well, of course. Onsies seemed to be another trend this year, with some people rocking them proudly and others seeming a bit sheepish.

As a fun, healthy, family-friendly event, it succeeded, once again. It’s a piece of Knoxville’s increasing embrace of cycling culture and can only help our reputation as a center of active living. I’m not sure if it was coordinated by organizers, but the small brass band playing Christmas songs as the cyclists arrived also added to the festivities.

As is often the case for events like this, my finger twitched far more times atop my camera than the number of photos I could possibly include here, so I’ll post more, later, on the Inside of Knoxville Facebook Page.