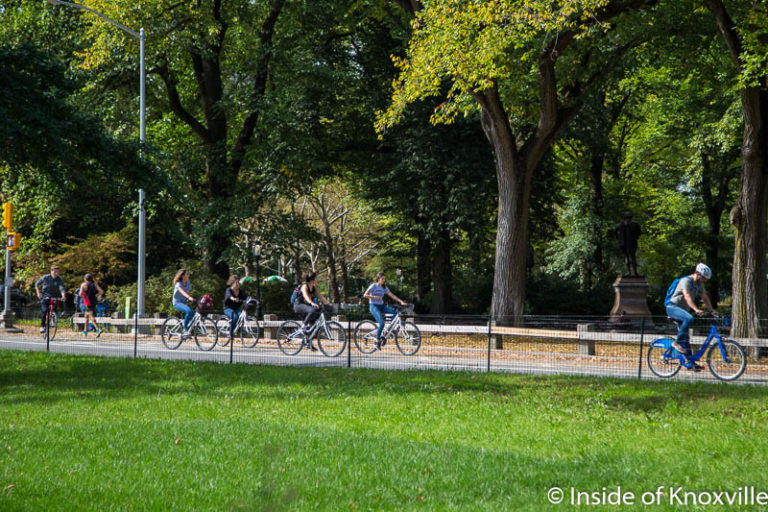 Inside of Knoxville contributor

With the expansion of the Urban Wilderness and the addition of a “black diamond” downhill course and new BMX track in South Knoxville, biking has become part of the city’s identity. Yet despite several proposals in the past, Knoxville has lacked the kind of bike share program that gives extra tourism cache to cities like Chattanooga.

As a result, many people were excited when Knoxville City Council approved a contract with bike share provider Zagster in August, at no cost the city. At the time, City Councilman George Wallace told the Knoxville News Sentinel that the program would probably begin with 100 bikes and ten docking stations.

But last week, the deal got even sweeter: Zagster announced it is rolling out a new service called “Pace” in a handful of cities, including Knoxville. Pace won’t require borrowed bikes to be returned to a station; when the ride is over, the bike can be left in any legal bike parking within the city. Best of all, says Visit Knoxville president Kim Bumpas, the program will start with double the number of bikes originally expected, and three times the number of stations. (Visit Knoxville is taking the lead locally at this stage, because it’s helping line up marketing partnerships for Zagster.)

Because the bike share format and technology morphed, the pedals are turning a little later than anticipated: You should see the wheels on the street in February.

Unlike many of the 200 bike share programs run by Zagster, the Pace system won’t require a membership, said company communications manager Jon Terbush. Anyone can rent a bike for $1 every half hour, using a free phone app. (For comparison: Chattanooga charges only $1 per hour, but the bike must be turned to a docking station once an hour or an extra fee is charged.)

In Knoxville, the bikes can be checked in by app too, so the bike doesn’t have to be “docked.” If the rider wants to pause to savor a cup of coffee or shop, she can put a hold on the bike, and it will await her until she returns.

“Ninety-nine percent of the technology is in the bike,” Bumpas said. “But we will still have racks to provide structure.”

Periodically Zagster employees will redistribute the bikes – so if you bike home to your apartment complex and no one else checks out the bike there all week, it will be returned to circulation at one of the racks, Terbush said. Those will provide predictable locations for people to find a bike when they need one.

The rack locations haven’t been nailed down yet. They won’t just be downtown; Bumpas anticipates there will be stations south of the river and as far west as Bearden, for example. Some will be in obvious spots, like near the visitor center, the convention center, and greenway entrances. Erin Gill, Knoxville’s sustainability director, said the city also suggested locations based on where existing or planned bike lanes make the route friendly to two wheels. Legacy Parks, Knoxville Area Transit, the University of Tennessee, and the Regional Transportation Planning Organization also provided feedback, Bumpas said.

In addition, some station locations may depend on sponsorships, Bumpas said. That’s the reason the city doesn’t have to pay to bring the service to Knoxville: Zagster keeps the money from the rentals, while business and non-profit sponsorships cover the cost of the bikes and racks.

Zagster tested the Pace model in Rochester, NY this summer, where it had eight times more ridership during its first 90 days than Zagster’s traditional model, Terbush said.

As a college town, Rochester has similarities to Knoxville, Bumpas noted. “What they’ve seen is that visitors do use bike share, and visitors that use bike share spend more money, which is why they put baskets on the front of all the bikes,” she said. “People tend to shop.”

Bumpas anticipates that tourists might be more frequent users of Knoxville’s rental bikes at first. “Bike share is a game-changing, added-value visitor experience. When people travel, we’re in this place and we don’t necessarily want to get back in our car,” Bumpas said. “We like to be active. That’s not just Knoxville — that’s a lot of places.”

But Gill added that Knoxville leaders hope the service gets more residents actively commuting to neighborhoods with increasing economic activity, like the south waterfront and Cumberland Avenue. Terbush said usually about half of bike share riders are locals.

Knoxville is one of three cities starting new bike share programs with the new Pace technology between now and April; Tallahassee’s rolls out this week (Dec. 4 week). Albuquerque, New Mexico and Huntsville, Ala. are converting their existing Zagster bike share services to Pace.

Terbush said communities were chosen for Pace based on their local biking infrastructure and the degree of community support for bike sharing. And Knoxville is getting more bikes than originally planned because Zagster has found ridership increases exponentially with every additional bike on the street. When demand grows, he added, Zagster will add more bikes and stations as needed.

“We want to get the best possible impression of ridership out of the gate,” he said. “One of the nice things about bike riding in general is — when the folks who aren’t doing it see lots of bike riders, and see it as commonplace and normal, the more people try it. It’s a nice cyclical relationship that creates growing demand.”