WUTK, 90.3 The Rock: Serving Up Great Programming for 35 Years 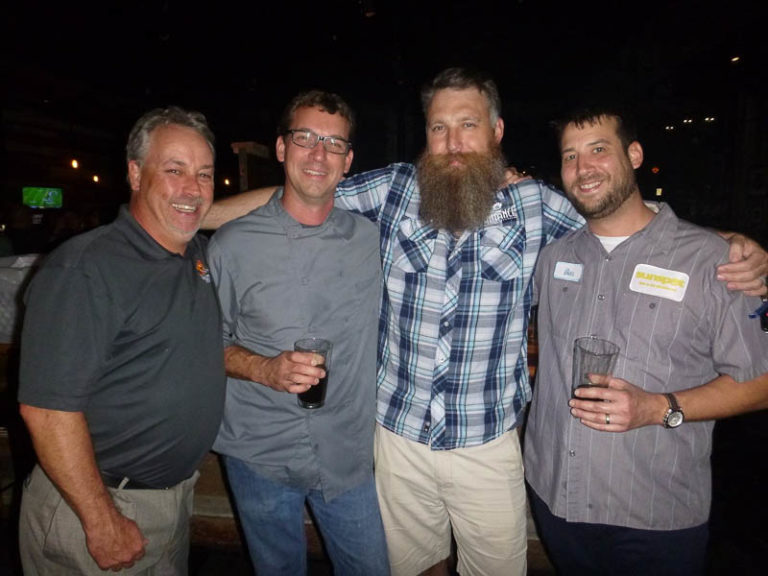 Ed Note:  I’ve enjoyed the station since about its second year of existence, first discovering U2 and The Alarm, two of my favorite bands from that era, on its airwaves. I’m proud to be a part of the WUTK family as I broadcast Knoxcentric each Sunday morning at 10:00 AM. You might have noticed a couple of weeks ago when the show didn’t air because the station wasn’t transmitting due to an equipment issue. It’s an example of the obstacles facing a station that receives no financial support from the University of Tennessee and could really use your help. Today’s feature is written by guest writer, Knoxville’s Megan Venable (who also happens to be married to the station’s GM). Here’s Megan:

“We love local, and we especially love local restaurants and local craft beer, and it is hard to find two better than have come together tonight to support local radio WUTK!” These were the words spoken by Volunteer Radio 90.3 The Rock General Manager and Program Director Benny Smith to the a packed house at Sunspot Restaurant this past Monday night. Smith was addressing the crowd of supporters who had gathered for the 5th Annual WUTK Beer Dinner on the newly renovated Cumberland Avenue Strip.

Since 2004, Smith has led the station through some of its most pivotal changes – at the highest, the transition from an unsuccessful 90.3 The Torch to the present 90.3 The Rock; and at the lowest – losing institutional funding from the University of Tennessee and operating as a self-supported not-for-profit station staffed almost entirely by current UT students.

Sunspot hosts this WUTK fundraiser each fall, and this year’s beer sponsor was none other than Knoxville’s very own Alliance Brewing Company. The event raises much-needed funding for the award-winning student-broadcasting lab and radio station, WUTK-FM, as it is one of the very few college radio stations and labs in the country that receives no funding from its university, college, or school.

Although the lack of funding can cause some stressful times when it comes to having to compete with other well-staffed and experienced radio stations in town, WUTK has won several local and national awards, including being named the sixth best college radio station in America in 2016 by ValueColleges.com, and has been voted Knoxville’s Best Radio Station by three different local alternative newspapers in Knoxville for the last twelve years running. In addition, it provides WUTK the opportunity to produce such fun fundraiser events like the annual beer dinner.

Since hitting the Knoxville airwaves in January 1982, WUTK, whose studio is hidden in the bottom floor of Andy Holt Tower on the UT campus, has provided thousands of students very valuable practical experience in the field of broadcasting, as well as promotions, marketing, music industry, and other areas. Most of these students are majors from the School of Journalism and Electronic Media in the College of Communications and Information at UT, but many have also been non-JEM majors, as well as WUTK Alumni who host shows as volunteers to help keep the music flowing, and the money coming in from underwriters, sponsors, and listeners.

Some of the more notable WUTK almuns include Mike Keith (The Voice of the Tennessee Titans), Dane Bradshaw (SEC Network), Lelan A. Statom (News Channel 5 Nashville), Sterling Henton “DJ Sterl The Pearl” (UT Athletic Department and celebrity DJ), and Brent Hubbs of VolQuest/Vol Network. Many other WUTK alumni are scattered up and down the Knoxville radio dial, as well as on local TV, so fundraisers like this beer dinner are vital for keeping the magic happening at “the bolt from Andy Holt!”

Which is why I found myself at the Sunspot restaurant on the Cumberland Strip that Monday night waiting for the WUTK and Alliance Beer Dinner to begin. The room filled quickly, the crowd being comprised primarily of long-time fans of the station, over-age students, current and former DJs and WUTK staff. Seated next to two of the hosts of WUTK’s Rock Solid Sports program, Colin Castleberry and Shea Payne, they initially lamented the fact that they had to hand over their Monday night show hosting duties at nearby Cool Beans Bar and Grill to radio colleagues in order to offer their support at the Beer Dinner, but their sorrow was quickly sated along with their hunger as the courses of the meal began to flow along with the Alliance Brewing Company beer.

Castleberry shared the collaborations he has had the opportunity to be a part of as a member of the WUTK staff, including an internship with Chicago Cubs Double A affiliate Tennessee Smokies, and the potential of an upcoming internship with the City of Knoxville. Both Payne and he talked at length about their excitement and the possibility to reinstate a stronger “home field advantage,” where they, as WUTK student reporters covering UT athletics, would be leaned on by anyone from local reporters all the way up to nationally recognized brands such as ESPN for insider information. Both agreed that Smith’s role as general manager of the station and his efforts to make the station a better place has made them look better as students looking to get into the radio workforce post-graduation.

Also attending the Sunspot Beer Dinner was WUTK faculty advisor and director of the School of Journalism and Electronic Media (JEM), Dr. Catherine Luther. She spoke about how critical the station was to the success of the school as well as the college, and the developments made by the staff and students who participate in the radio program had a real dedication to serving the area with music and stories.

During the actual dinner, there was no time to talk to Smith between a between-course raffle, five plates to sample and of course – beer. Post-dinner, Smith did talk about the whole “local” angle, and how WUTK has been providing Knoxville with plenty of support for the local music scene, as well as the local businesses and sponsors who also offer their support for WUTK through underwriting, donations, and event hosting like the annual beer dinner.

“Corporate, commercial radio stations are really struggling to stay on the air due to the fact that so many of them turned away from the local communities they serve due to corporate ownership cutting costs, etc. But, in Knoxville, we are so fortunate to have three of the best locally owned and operated, award-winning, non-commercial radio stations in the country with WUOT, WDVX, and WUTK.” Smith remarked.

WUTK plays a great variety of local musicians on air during regular programming hours, as well as on the 2-hour “Locals Only” Tuesday night show. WUTK also gives away lots of gift cards to local businesses to their listeners, and provides local information programming like the Sunday morning shows “KnoxCentric-Powered by Inside of Knoxville” (co-hosted by our very own Urban Guy Alan Sims), and “The Rocky Top Round Up.”

But, when local comes together as they did at the beer dinner, pairing the culinary art of Sunspot Chef Jeff Carter with the craft beer expertise of Alliance Brewing Company’s Master Brewer, Adan Ingle, as Smith said, great things can happen.  Smith said:

“WUTK has supported our local scene like no other station in town has done for the last 35 years. When we are able to come together and produce an event like this one, some Knoxville magic usually happens! So, we cannot thank businesses like Alliance Brewing, and Randy Burleson and Sunspot enough for helping to keep us on the air, and for partnering with us for one of the best events we produce during the year. Plus, the attendees love the beer, food, and valuable raffle prizes. Everybody wins on a night like tonight, but Knoxville is the biggest winner!”

WUTK will be producing more fund raiser events in the near future, including their twice-a-year “Exam Jam XIV” local music showcase (Dec. 6 at Scruffy City Hall), and will be unveiling some exciting new ones for 2018. Anyone can make a safe, secure, tax-deductible donation to WUTK through the station’s website at any time. And be sure to check out the live stream of great programming.

Final Editors Note: Be sure to stop in and chat up Representative Rick Staples tonight at 7:00 PM at the East Tennessee History Center. No agenda, just a listening event. Drop in and give him an earful!