A New Business Opens Across the River 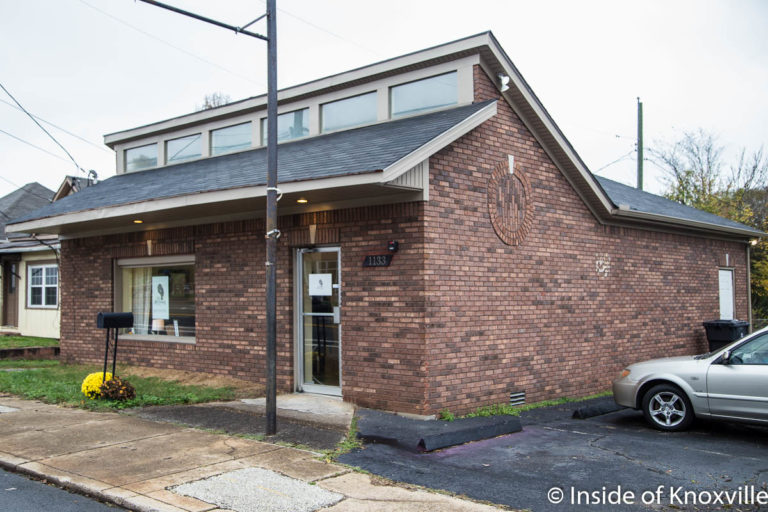 It’s been a hot area for quite some time. That spot just over the river from the core of downtown continues to explode. In the recent past we’ve had openings at SoKno Taco, Trailhead Beer Market, Alliance Brewing, Landing House, Uncle Lem’s, Three Bears Coffee, Honey Bee Coffee, Riverside Veterinary Clinic and more. Suttree Landing Park offers a new destination on the waterfront and the explosion of the Urban Wilderness is gaining national attention.

Amy Noonan Feener has been watching the progress and wanting to be a part of it for some time. She and her husband previously lived in south Knoxville and the building at 1133 had been on her radar for years. When it came open, she called and was told someone else wanted the building. A couple of weeks later came word that deal had fallen through and she signed a three-year lease last June. Last week she opened The Bee’s Knees Hairdressing Salon.

Originally from Connecticut, she moved to the area from Maine with her family in 1996, graduating from Anderson County High School in 1998. Her family had long been in the restaurant business and, consequently, she had grown up in restaurants fascinated with bartenders, while also harboring thoughts of attending beauty school.

She tried the bartending first, working as a bartender at the airport for about eight years and took college courses with thoughts of being a drug and alcohol counselor. She attended the Tennessee School of Beauty in 2007 and began a shift to her other dream. She’d always played around with her hair – shaving her head as a teen and trying out every color. It was a natural shift.

She worked in the Old City and then the Bearden area. She worked at several salons in that area, but didn’t find quite the fit she was looking for. Saying she was looking for a comfortable place, I asked her what that meant to her. She said, “Texture, warmth, color, attitudes, welcoming to everyone.” It’s the kind of salon she intends to have at Bee’s Knees – one where everyone is welcome and, “no one is too weird.”

She actually started the business three years ago in a studio out west. Basically a warehouse for beauticians, she had a small area to do her work. With no foot-traffic, she slowly built her clientele with customers not only from west Knoxville, but from Oak Ridge and other areas.

But her own salon had always been her goal and south Knoxville seemed a better spot than the market-saturated area around Bearden. Getting this particular building felt right both because she had her eye on it for so long and because she knows a number of her business neighbors and has many friends in the community. She said everyone has been very supportive.

She currently has one employee and wants to find two more who are the right fit for the business. The Bee’s Knees offers cuts for the family – from children to adults, as well as colors, waxing, eyebrows and other services you might expect.

“I want to create an all inclusive atmosphere,” she said while noting it is a work in progress. While there are two comfortable waiting areas, she and her husband, Jackson, are building an additional room to make their customers comfortable. While you wait you’ll also be able to have a soda, tea, coffee or an Alliance beer.

Stop in and welcome her to the neighborhood. Get a cut and have a beer. She’s open Tuesday through Saturday. Hours start each day at 10AM and the shop is open until 8PM on Tuesday and Thursday, until 4PM otherwise. You can make an appointment by calling 865-309-3151 or via Schedulicity. Give her a “like” on FB and welcome the newest addition to a booming section of the city.