The Telephone Building: The First of a Two Part Series on the Downtown AT&T Building 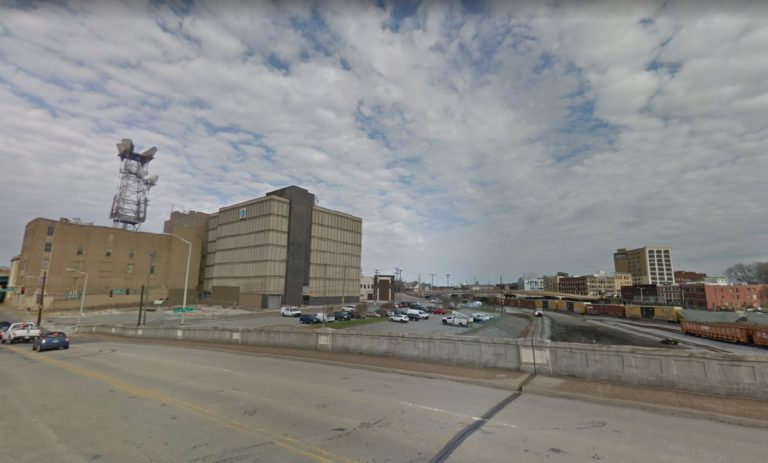 AT&T Building as seen from the Broadway Viaduct

Today we welcome guest columnist Oren Yarbrough. You’ve seen his comments here. He’s an intern architect with DIA on Gay Street and he’s got a particular interest in what I’ve called the ugliest building in the city: The AT&T building on Broadway beside I-40. Here’s Oren:

Most people who have spent some time in Knoxville have driven over the Broadway viaduct, the soon-to-be-updated roadway that connects North Knoxville to all things south of the railroad tracks. Broadway has been a part of Knoxville industry, transportation, & commerce for about as long as the city has had such feathers in her cap to speak of. There was a time when Knoxville extended continuously north from the railroad tracks with thriving neighborhoods & businesses lining both Broadway and Central.

In the middle of the last century, as industries changed throughout the region, the land next to the rail lines in Knoxville went from a thriving hub of hotels, restaurants, commercial retailers, & wholesale warehouses to what we have today: little more than a series of parking lots. The demolition of large sections of buildings surrounding North Gay Street 50 years ago for the interstate overpass created a visual barrier that has hampered development north of downtown ever since. It is only recently that sections of the neighborhoods north of downtown have begun to see commercial and residential growth to a scale that is grabbing the attention of developers and outside investors.

Regarding Broadway, as many of you who have driven this section of road have noticed, we have an image problem of sorts. From the interstate looking downtown and from downtown looking past the interstate visitors and Knoxvillians alike get a face full of the same thing: the massive concrete block that makes up the AT&T campus.

This building has been declared an eyesore of sorts pretty much since the day the last major addition was constructed. In a period of time when downtown Knoxville was dying and people were not actively investing in the land surrounding the central business district, any development that filled a vacant lot was seen as a plus. Now the AT&T building is a massive structure that dominates the scenery in the one block wide swatch of land between the interstate and the Broadway and Gay street viaducts. Most people would say this building is seen as a net negative in terms of Knoxville building stock.

This two-part article will discuss the surprisingly important and varied history of the AT&T Building, and propose a simple idea to try and give this structure some good press in the city & also the region. Wish me luck.

The AT&T building as we know it today is actually 5 separate additions to one building that dates back over a century. Cumberland Telephone & Telegraph built the original structure in 1912 and ran their main offices in this location, at the corner of Broadway & Magnolia, until they were purchased by Southern Bell in the 1920’s.

Southern Bell Telephone & Telegraph expanded the “Telephone Building”, as it came to be referred to, multiple times from the late 20’s through the late 40’s, ultimately leading up to the massive expansion of the concrete building we all know and love sometime around the early 1980’s. During this era of progress and growth Southern Bell grew to become BellSouth & then what we know today as AT&T.

Using old Sanborn Insurance maps from the last 100 years & a handful of historic Thompson Photographs of the Telephone Building and Old Broadway I was able to find out an even more impressive find in the history of the structure; something that warrants it being given attention and at least partially preserved. Expansions made to the Telephone Building by Southern Bell from the late 1920’s through the 1940’s were designed by famous Atlanta architecture firm “Marye, Algers, & Vinour”. My discovery of this information was in thanks to a construction sign on a historic Thompson Photograph from late 1920’s when one of the first major additions was under way.

A quick look at any of the train terminals can show you just how great the breadth of work “Marye, Algers, Vinour” created in their heyday. One source I read states that P Thornton Marye of the firm was neighbors with Southern Bell’s president and so their office designed not only the new Atlanta headquarters, but most of the regional offices throughout the south as the company expanded.

Most sources credit P. Thornton Marye with designs related to Southern Bell during the decades of the 1920’s through the 1940’s, meaning, our Telephone Building has significant connections to other structures throughout the Southeastern United States via his legacy. Marye also worked in a handful of other partnerships, some only lasting a few years. One other significant piece of work Marye’s name is associated with is the Louisiana Surpreme Court Building in the French Quarter, New Orleans.

Around the turn of the 20th century, Raleigh ,North Carolina had a massive renaissance and building boom that Marye was also a major part of; building the North Carolina State administration building, the Raleigh City Hall & Auditorium, Wake County Courthouse, and numerous “modern” banking towers in downtown Raleigh. A handful of these structures are still surviving today and can be visited.

When you drive by the Telephone Building today you can mostly discern the different additions that make up the structure and get a rough idea of the timeline they were constructed. The oldest structure is the façade that dominates most of Magnolia today. This building, the original Cumberland Telephone, had a small addition in the early 1920’s before it was purchased by Southern Bell. Despite the Magnolia face of the building looking like one structure if you look closely you can see where there is a distinct line in the brick on the front of the building.

The next major addition to the Telephone Building was completed in the late 1920’s, sometime after Southern Bell purchase Cumberland Telephone. The original image referenced earlier by Thompson from the time of construction shows this addition almost completed. The first addition by Marye, Algers, and Vinour was only two stories high and was capped in a stone ornamental detail that is seen at the top and centered on the structure.

If you look at this portion of the building today you will notice this stone piece is midway up the face of the building on Broadway. In the 1940’s another addition was made to the building that added more levels to the existing wing. The later addition looks to be of the same style of architecture as the addition before, but with less detailing and ornamentation; It’s this wing that attaches Knoxville historically to other southern cities experiencing an economic boom around the turn of the century; Atlanta, Birmingham, Raleigh, & New Orleans.

The Telephone Building was both blessed and cursed with its location and proximity to downtown. The interstate has slowly decimated this portion of the city since it’s construction decades ago. The influx of KARM and the flattening of nearby neighbors has created something like an economic vacuum. Having the Telephone Building attached to the large vault like server building has been what has saved it from being abandoned or demolished decades ago.

The same ugly eye-sore that is now a crux of the downtown skyline has been a symbiotic steward for the historically interesting appendages that now beg to be restored and given new life. Now that outside development has begun to occur in the blocks surrounding the Telephone Building and beyond the interstate, I would like to share my idea to try and turn this net negative into something the city is proud of.

One last interesting factoid to share. Because Southern Bell merged Knoxville’s regional markets into its company in the 1920’s from older businesses like Cumberland Telephone & Telegraph & East Tennessee Telephone Company, AT&T is technically one of the oldest continually operating companies in Knoxville today. A reference of some of the oldest companies in Knoxville puts AT&T, technically operating in the city since 1882, at number 5 on a list of all companies.

Please check in tomorrow for part two on the AT&T Building for the rest of the story on this interesting building and its hidden potential for the city of Knoxville.