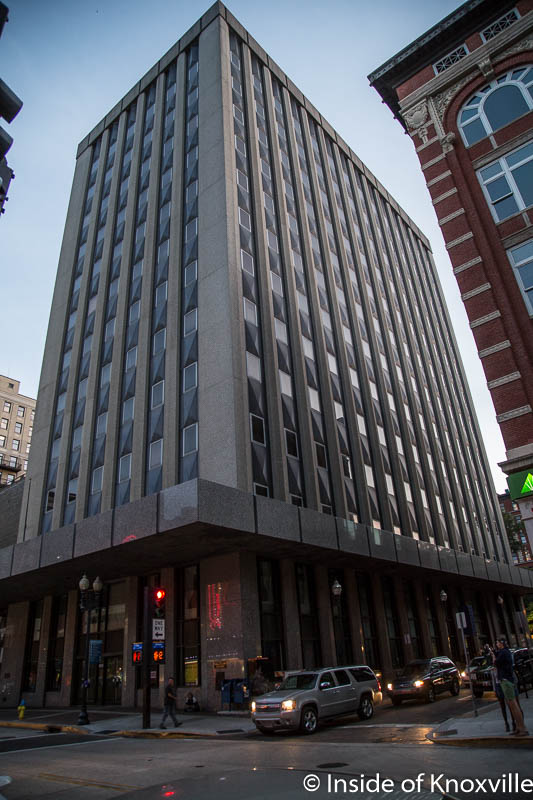 Like me, you may have wondered what was happening in a building positioned on perhaps the most prominent corner in the city: Union and Gay. The Conley Building has seemed underutilized for years even as properties all around it have blossomed. The first floor at 505 South Gay, once occupied by a bank, has been mostly empty except for a travel agency for the last several years.

Previously owned by Mike Conley (Universal Properties), negotiations to sell floors two through thirteen to BAJM (Henry and Wallace, Brant Enderle), along with the elevator, office tower lobby and the basement began in November 2014. A complex HOA was established and Universal was to be allowed to open a business – whether retail, restaurant or other – in the first floor and mezzanine. The sale closed in March of 2015.

In a lawsuit filed in July 2016 (and discussed in a Mercury article last September), Universal says it was approached soon after the sale by Moshakos Real Estate, LLC who were interested in purchasing the first floor and mezzanine for a restaurant otherwise reported to have been a Carolina Ale House restaurant and brewery. Universal claims it had a contract for $2.5 million.

According to the lawsuit, Moshakos wanted assurances that it would be permitted by the other owners of the building to install a grease interceptor, hood vent and utility lines, each of which would likely require coordination with the other owners. They claim (and BAJM denies) that repeated requests were made to the HOA Board and the company was directed to talk directly to Brant Enderle. Strangely, in the response to the lawsuit, Walter Winchester on behalf of BAJM and Brant Enderle, makes the assertion that they, “deny that Brant Enderle is a member of BAJM, LLC.”

The suit alleges that Brant Enderle was, “intentionally and commercially unreasonable in his discussions with Universal and Moshakos. Enderle told Moshakos that the first floor and mezzanine areas were defective and there was something generally wrong with Universal’s Unit.” The response to the suit denied these points. Universal says it repeatedly attempted to resolve the matter while the board and BAJM unreasonably delayed responses. This was denied in the response and counter-suit.

They claim (and it is denied by the board and BAJM) that the offer was withdrawn by Moshakos in June 2015, but that they persisted with both Enderle and the board to bring the deal back to life. They claim they provided the detailed plans required of them and that these were rejected, while the response and counter suit say this isn’t true.

After limping along with attempts at a reconciliation, Universal brought their suit in July 2016, amending it in March 2017. They charged BAJM with breach of contract, intentional interference with existing or prospective business relationships, breach of fiduciary duty and civil conspiracy. They wanted the $2.5 million they said they lost, other loses and damages.

BAJM through attorney Walt Winchester denied the allegations and made a counterclaim alleging the HOA of the building was owed $58,912.11 by Universal. Further, they claimed that, “Universal has intentionally placed a cloud on the title to the building and the interest of the defendants therein . . . ongoing negotiations are occurring regarding the sale of the Units of the Conley building . . . Universal is acting intentionally to prevent the defendants from selling their units.” They requested a settlement of over $6,000,000.

Prospects of any resolution of the issues surrounding the building and of its near-term redevelopment seemed remote, if not dire, until a new party stepped in and a complex deal involving multiple adversarial owners was brokered. Negotiations continued until the last moment and an agreement was reached on Friday for the purchase of the entire building by Knoxville Hotel Partners, LLC. The lawsuits were dismissed with prejudice –  meaning permanently, and the entire building is now under new ownership.

While no announcement has been made regarding plans for the building, the name of the LLC would indicate a department or grocery store isn’t likely on the boards. According to the Tennessee Secretary of State website, Alpesh Patel is listed as the contact. He is also listed as the agent for KANA Hotel Group, where he is CEO. He is a Knoxville resident, but the company has hotels in sixteen states, including fifteen in Tennessee.