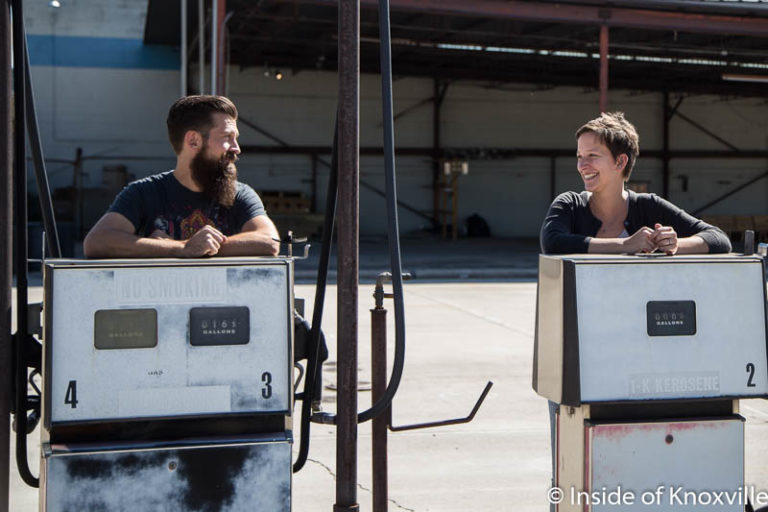 The couple has an appetite for all things urban. Alden and Scott Larrick are determined to bring a slice of other urban scenes they’ve enjoyed in their travels and various homes, to our center city. They think they’ve spotted something we’re missing and a spot that is ready for something cool. The couple plans to start a food truck park, Central Filling Station, at 900 North Central Street.

You’d be forgiven for saying it looks like a large flat surface. But they see something very different in the potential the spot holds and they plan to give it the assistance it needs to achieve that potential. It’s an urban-infill project that doesn’t require much infill.

Alden, originally from Macon, Georgia, attended college in Ithaca, New York because she had a hunger to experience other places and, particularly, larger cities. After attaining degrees in Art History and Architectural History, she moved to Baltimore where she worked in marketing for an architectural firm.

It was there that she met Scott, an architect originally from just outside Richmond, who attended Virginia Tech. As Scott grew tired of the corporate world, the couple back-packed around Europe before deciding to move to Austin where Alden earned a degree from the Universit of Texas in sustainable design and worked for an environmental non-profit. Indicative of their adventurous spirit, before they moved to Austin, neither had ever been in the state of Texas.

While there, Scott opened his own firm as they watched Austin grow from 1.5 million to 2 million people. Interested in small business and small communities, it seemed to the couple as if opportunities had passed them by, though they found Austin a great place to learn and develop ideas that might be transported elsewhere.

As they began thinking of the next phase in their life, they knew they wanted a growing urban environment. They wanted to, “live, work and hang out in a small area.” Scott confessed they both, “like old southern downtowns,” so when it came time to move, they looked south. Knoxville caught their attention as it is situated between their families and it fit the kind of small urban environment that attracted them both.

They made the move, each working for a while on projects they were able to bring with them from Austin. From the beginning they wanted to do something food and beverage related – they both have backgrounds in food service front and back-of-house – and they wanted to make an impact on their new community. Searching for a home that, “we can fix and can walk to coffee and beer,” they found what they were looking for in Parkridge. They like to say it found them.

After considering some sort of brick-and-mortar project, like an incubator for restaurants, they noticed the explosion Knoxville has experienced in food trucks (they say there are around 60) and recognized an opportunity. In Austin, they’d seen a model like the one they are planning.

The idea is to use the space at 900 North Central, currently a vacant lot save for the remaining gas pumps, as a regularly scheduled food truck park with several trucks scheduled each night, but with amenities not typically found when food trucks gather. For example, they’ll have electrical hookups for the trucks so the vendors will be able to turn off their generators, saving money, reducing noise for the customers and being more environmentally sensitive.

They will also provide restrooms and a children’s play area. Seating in the covered area on the site will include communal and bar-style seating for around 150 in a cool shade. An outdoor bar will compliment the food trucks with canned and bottled beer as well as wine and non-alcoholic beverages. There may be music at times. Alden said they really want it to have a sense of place, a comfortable gathering spot for friends and a, “neighborhood hangout that welcomes visitors.” And the whole family – children and pets included – are welcome.

The focus, however, will be on the food. It’s not intended to be a late-night hangout. They’ve loved meeting nearby businesses and they don’t want to compete with them, but rather complement what they are doing. They intend for this to be something different from other ventures and they are excited to make it happen.

The initial plan includes both lunch and dinner shifts with four to five trucks each time. They plan to be open Thursday through Sunday, though that may expand depending on demand from crowds and from vendors. The couple said, “We like beer, food, good music, bikes and dogs.” This seemed like a good way to combine all of the above.

As Alden’s MA might make you suspect, there will be an emphasis on environmentally sustainable practices like recycling. There may eventually be a native planting garden and encouragement to discontinue use of Styrofoam.

They also said everyone they’ve worked with from city government has been very helpful to get a different kind of project off the ground. They particularly mentioned Patricia Robledo and said having such easy access to local government officials who can make things happen is unique. They feel the Recode Knoxville effort had already paved the way because the consultants had mentioned this type of enterprise specifically.

Construction was set to have begun before you read this and they hope to have the park open and running early next year. Check out their Facebook Page (and give them a “like”) and their webpage for updates.