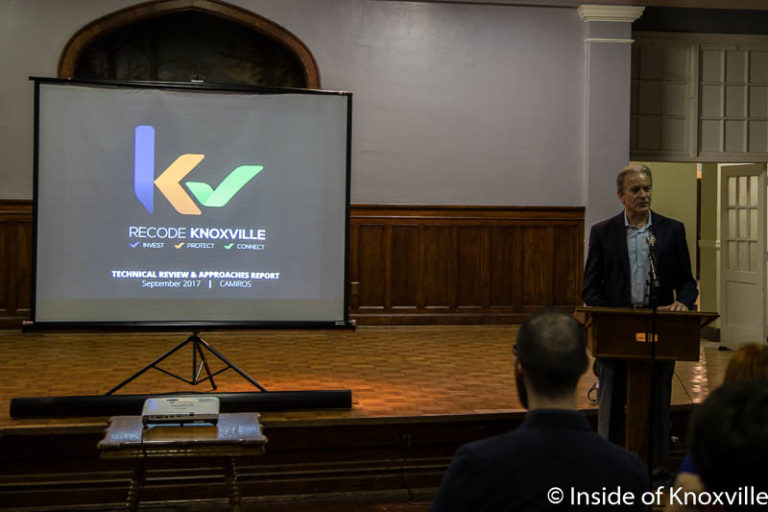 A public meeting was held on Tuesday to detail the progress made by the Camiros Consulting Group on the current effort to re-write Knoxville’s codes into a more unified, understandable and consistent set of codes. The idea is to make the codes general enough and inclusive enough that special approvals, which are now very common, might be less so.

Simplification in zoning uses seems is one emphasis. For example, uses would be define more broadly, such as a use of “retail goods establishment,” rather than current detailed listings such as “clothing store, book store, record store, convenience store.” Specific uses of concern, such as “adult stores,” would be addressed separately and sustainable uses, which are not currently addressed, would be included, such as urban agriculture, solar farms, community gardens.

While MPC would continue to be a vehicle for variances – now called “special use,” the bias would be for any use not specifically disallowed, as opposed to the opposite as it currently stands. The MPC would have the authority to “impose additional conditions on a special use to mitigate impacts.”

Requirements for Residential Districts would also be simplified. Neighborhood districts would be created and current standards, such as the 7,500 square foot minimum lot area would be eliminated. It was pointed out this regulation puts older, denser neighborhoods into “non-conforming status,” out the gate. Setbacks for lots would also be tailored to the district. Once the new districts are established, an evaluation of the overlay districts may determine they are no longer necessary or may be consolidated. Six different residential district types are proposed that more accurately reflect the uses in areas found around the city.

Industrial Districts would be refine more than so much altered, by consolidating districts, protecting existing industrial districts and allowing for their transformation to mixed-use where appropriate.

The devil may be in the details, but the common-sense approach to making the byzantine codes into a sensible and navigable system seems to have a good start. The group brought in to shepherd the process is attempting to be as transparent as possible. In addition to public hearings like the two I have attended, their website, RecodeKnoxville details their progress, including a calendar of their meetings and documents produced thus far, including the complete 38 page Technical Report alluded to above. You can read the document in its entirety here.

So, whether you think the gubment is up to no good or you have encountered the occasional absurdity of the codes as they now stand, you need to get involved. Read the documents. Attend the meetings. Express your concerns to City Council members. I know a number of you have been frustrated with one portion of the current codes or another, so now’s the time to speak up. You may rest assured that powerful interests will let their opinions be known. Essentially, if you don’t let your voice be heard during this very open process, then you’ll be hard pressed to explain why you should be listened to if you don’t like results.