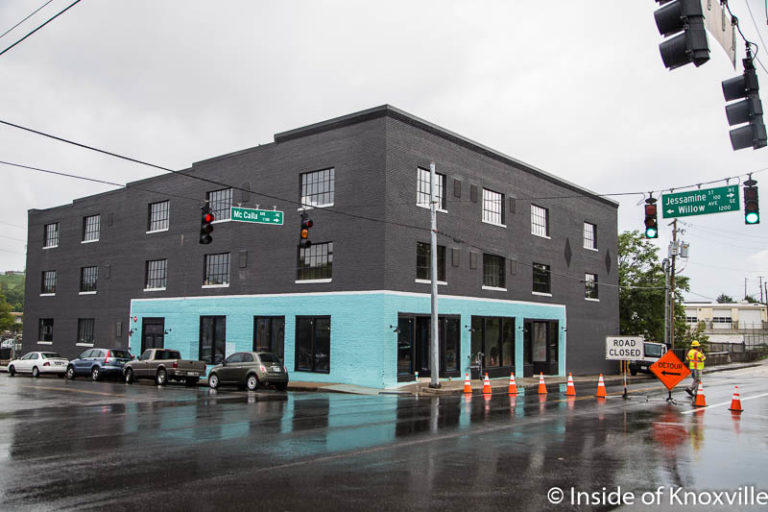 While it might seem that the stock of older, pre-war downtown buildings available for redevelopment has been expended, there are actually quite a few. Not necessarily located in what we now think of the downtown core, quite a few sit just to the east.

One such building is located at the corner of Willow and McCalla, just a minute or two bike ride from the old city out Willow or Jackson. Currently called Electric Company Lofts, it has recently been redeveloped by Dewhirst Properties into apartments with a small commercial space.

I recently met Mark Heinz and Drew Holloway to take a look at the recently completed project. Looking at the location, I was struck by the fact that a spot which seemed so far from the city just a short time ago, now seems much closer. Just off the back of the building I could see Overcoming Believers Church, home of the Change Center which has been covered here. From the front of the building I could see the Red Brick Market, which I’ve also covered.

Outside the building is a twenty-two spot, gated parking lot bounded on one side by First Creek. Codes require that any change of use bordering a waterway triggers a sixty-foot requirement for a permeable surface beside the waterway. In this case, the sixty feet in question on the border of this property and the creek was cement. Its removal required approximately fifty truckloads filled with cement to be taken to the dump and the installation of gravel and brick paver surfaces.

The result is an amenity for residents, including a common outdoor space with picnic tables. A shelter runs alongside the culvert containing the creek and it’s a perfect spot for storing bikes in a semi-sheltered spot. Several of the floor units have decks extending into the area and privacy will be increased with barriers between them. The result will be reminiscent of the courtyard at the Armature Building. Twenty-two parking spaces are also located on the property.

The building, under the guidance of lead designer Whitney Manahan, has retained as many of the original touches as possible, much like many other Dewhirst properties. The corner rear apartment, which will be a work/live space, will retain the two garage doors, for example, allowing it to be completely opened along one side. Two pads of Work Inventory tickets from the previous business still hang on the wall.

The development includes thirty-five apartments ranging from about 500 square feet to about 815 square feet. Total cost was around $4 million, with about ten percent of that being the aforementioned site work. Most of the units are studio or loft apartments and there are two commercial spaces fronting McCalla, one of which has been taken by the University of Tennessee as an art gallery to replace that which was lost on the 100 block of Gay Street. Monthly rent for the apartments range from $695 to $1100.

The building was constructed in 1929, just before building essentially stopped due to the depression and World War II. After serving as a furniture warehouse for many years, it became the home of Efficient Electric, reflecting the shift of the area from mostly residential to light industrial after the 1920s. Most of the original floors remain and markings on beams throughout the space reflect the inventory system used by the electric company.

Additional wood for shelving is heart pine harvested from other Dewhirst Properties projects such as the JC Penney and Mill and Mine buildings. Heinz spoke with great respect for what that represents – original first growth wood which is now hundreds of years old. He said it is important to them to use the “lightest touch possible,” in their projects, saying there is, “so much interest already.”

So, the eastern boundary of downtown is stretched a bit further. With rumors of a planned baseball stadium for the area likely to become reality sometime in the next ten years, is this part of the warehouse district ready to become a part of the center city? Will people be willing to essentially be modern pioneers for living in this part of town. What are your honest thoughts?

Well, you don’t have to speculate too long, though I’d love to hear what you thought in comments below. The verdict is actually already in. Without a public announcement, in the absence of an advertising campaign and simply by offering the option to people who called asking for a downtown apartment, the building is already, essentially, full. Twenty-two of the units are already occupied. Three others have keys and nine units are leased, but not yet occupied. That leaves only one unit unspoken for.

It’s interesting to consider what this means for demand for downtown housing. The property is certainly outside what anyone would have considered downtown when I started this blog just a bit over seven years ago. It’s in a building and an area that would have been unimaginable for housing in the near past. And it is full of people who are excited to be “downtown.”