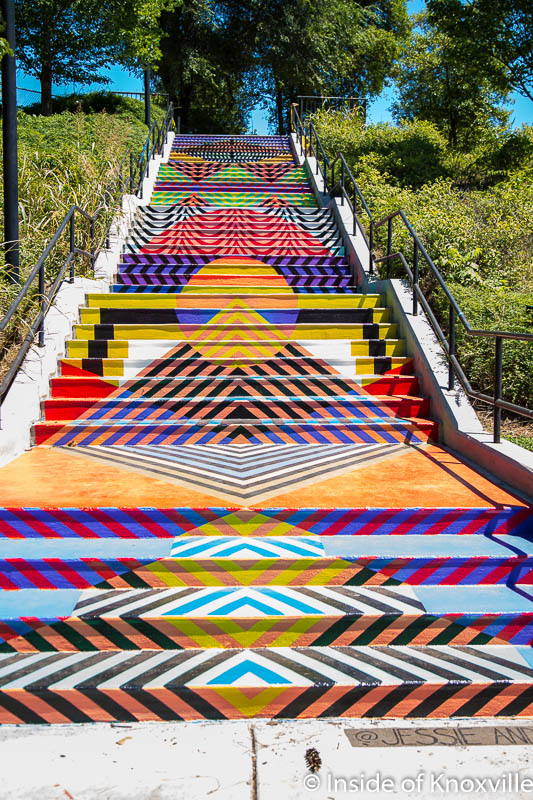 It’s easy to fall into patterns as you walk around downtown. Many people stick to the area around Market Square and the nearby portion of Gay Street. The Old City is the hang out for others. Sometimes it’s good to take a long walk around downtown to areas you might not ordinarily travel. You might be surprised what you find.

I recently made a loop on the south end of downtown proper, starting at the intersection of Gay and Hill, walking east to check out some of the recent art additions.. Just down from the recently discussed Andrew Johnson Building and across from Blount Mansion is the Dwight Kessel garage. The garage itself is worth mentioning simply because it, like the other public garages downtown, offers free parking nights and weekends and it is often overlooked. It’s a block from the Bijou.

A set of banners has recently been added to the side of the garage in an effort to offer more than a sheer blank wall to interest passersby. As is the case with the large banners on the Locust Street Garage, Knoxville history offers the focal point of the two banners. To the right as you look is a montage of musical artists associated with the Cradle of Country Music Tour. Hopefully this will highlight the existence of this great walking tour and encourage more people to take it. If you haven’t, I encourage it. Stop by the Visitor Center and pick up the guide.

The image to the left is worth some focus. It looks like an ancient rural scene, but it is actually Chisholm Tavern, which was located about a block from that spot at Front and Gay. It is pretty ancient as Knoxville goes, having been erected as a residence by Captain John D. Chisholm, a friend of William Blount. Completed in 1792, the photograph was taken in 1934. Here’s the tragedy: It stood until the 1960s. At over 170 years old it was destroyed for, “urban renewal.” And so, we have a banner. At least it is remembered.

Walking further east on Hill, a new mural comes into view from the bridge across Neyland Drive. Located on a rambling retaining wall adjacent to Outdoor Knoxville on Volunteer Landing Lane, the colorful new addition to this corner of downtown was painted by Eduardo “Eddie” Mendietta.

This particular mural reflects the natural environment found in the area through its depiction of river wildlife. Funding for the project was provided by the city via the Arts and Culture Alliance and their Public Art Committee. The eleven concrete panel project cost $13,500 and comes from a $250,000 budget for public art. It’s best viewed by walking down the winding road to the Outdoor Knoxville building. A cool bonus as you see it from the bridge is that it sits beneath the bicycle sculpture by Kelly Brown.

Just about halfway between your first sight of the retaining wall mural and your close up view if you are walking in that direction, you’ll come upon another sculpture. It’s hard to photograph because of its reflective surfaces. Those same surfaces make the sculpture dynamic and interesting as it changes with every angle and with every shift of light through the day.

Completed last fall by artist Derek White of Bird on the Wire Studios, the project was championed by and largely funded by the Riverhill Gateway Neighborhood Association made up of the condos lining the river just behind the sculpture. CBID, the Public Arts Committee, Petsafe and others also contributed.

After walking past the sculpture and along the mural, I walked along the river from Volunteer Landing via the comfortable walking path. There’s always something interesting along the river. Children splashed in the pools clearly posted as off limits. Boats passed. I was struck by the beautiful geometry of the train trellis near UT campus. A turn just shy of Neyland stadium crosses Neyland Drive and leads to the Second Creek Greenway, which is always a pleasure to walk.

My objective in walking this direction was to see the new art installation on the steps leading from Cumberland to a parking lot that connects to the greenway and to the World’s Fair Park. Near Eleventh Street, the heavily used forty-three steps are ten feet across, making for a large surface for a mural. This project like the other mural in this article, was funded by the city’s Public Arts Committee.

Artists Jessie Unterhalter and Katey Truhn completed the project this spring and the results are quite striking. The tapestry is typical of the work of the duo from Baltimore, but it also reflects the Appalachian craft movement found in quilts and other art. It’s easy to imagine it as a quilt spread over the steps. It’s proving to be an attraction of its own and a perfect spot for a selfie.

From there I walked back into the city via the World’s Fair Park, climbing the steps across Cumberland from their colorful neighbors. Those steps lead to another hidden art stop along the way. The larger-than-life statue of Sergei Rachmaninoff sculpted by Victor Bokarev to commemorate the final concert of his life, which took place in Knoxville. It’s a surprising find for those who haven’t seen it and a perfectly peaceful spot to discover in the center of the city.

We’ve got a beautiful city. Interesting walks await in every direction. Why not take a walk and get to know our city’s art, natural features and built environment just a little better? I’ll look for you.