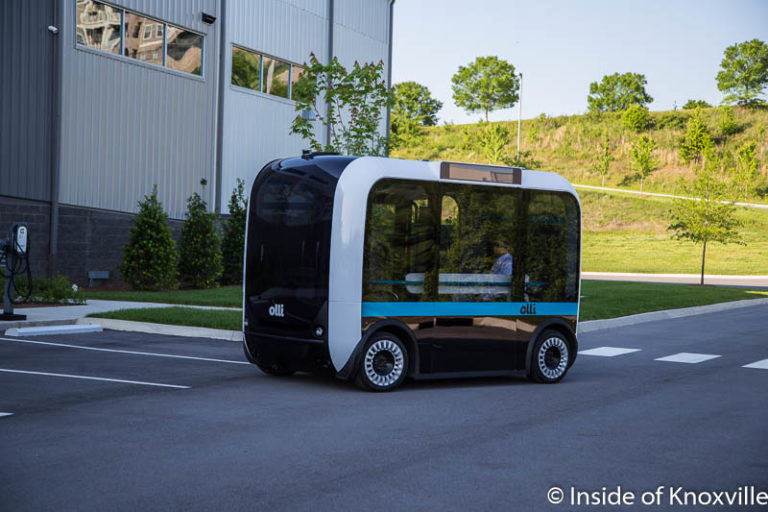 I recently took a field trip, thanks to Visit Knoxville, outside my normal habitat of downtown, in order to take a ride in Olli, the autonomous vehicle developed by Local Motors. The current version is a prototype and is awaiting mapping of routes in order to be fully autonomous. It’s the first of two vehicles being purchased by Visit Knoxville. While 35% of its components are 3-D printed, the model now nearing completion will increase that percentage significantly.

Local Motors currently has two micro-factories – one in Berlin, Germany and the other in Knoxville. General manager Gregory Haye, who is from Chicago, told me he was surprised when he learned the location of the factory in Knoxville, but that it really makes perfect sense. He pointed out the unusual amount of material science knowledge available through Oak Ridge and UT.

Regionally, the automotive supply chain and raw materials they need are also easily accessible. While many of the parts will be 3D printed, for example, others can be bought more cheaply than they can be printed. Olli’s tires, for example, are made by Volkswagen which is located in Chattanooga.

Billy Hughes gave me a ride in the vehicle around the parking lot on the perimeter of the micro-factory. The autonomous portions have to be augmented by use of an x-box controller until a route is GPS mapped so the vehicle can follow the route in a completely autonomous fashion. It has a sixty mile range and will wirelessly charge at charging stations developed and placed by Local Motors. Billy pointed out that, while it will go faster, above about 20 to 25 miles per hour conversation among passengers tends to fade as anxiety rises. The company understands they have to gradually win the confidence of potential passengers.

He also said that the project became a passion for him when he began thinking about his aging mother and his fifteen-year-old daughter. He describes his daughter as riveted to her electronics and notes that his mother is getting less comfortable driving. He feels that he is a part of moving them and other’s mothers and daughters toward a safer mode of transportation in which their inattention or loss of response time would be rendered irrelevant.

He also said that universities and research labs are building databases that will make full on-the-road autonomous operation increasingly safe. For example, sensor technology has to evolve further to allow high speed travel, as the computer can only analyze the data coming at it from the sensors at a certain speed. Object recognition software is also being improved so the on-board computers can make ethical choices of sorts – like recognizing a human form and being able to have the data to understand that if it must hit an object, that would not be the preferred object.

My trip in Olli was actually pretty uneventful. The doors close very similar to those on the starship enterprise and Billy said he wants them to add the sound effect. The all-electric vehicle is silent, so there is no engine noise. We didn’t exceed the slower speeds he’d mentioned, but I don’t think I would have felt unsafe if we had. I’m looking forward to the fully automated version, but this is close.

I also spoke with Brad Rutherford who showed me the newer version which is nearing completion. Just from the first version to the second, they’ve reduced manufacturing time from around 350 hours to about 40 hours. They’ve also reduced cost from about $39,000 to about $8,900. It is also about 400 pounds lighter.

They’ve also moved from 1400 parts to 140 parts. After the parts are printed, it takes four people about five hours to put it together. They understand they are doing the largest complex 3D printing being done anywhere in the world. The next generation should have electric motors in each wheel. The fact that it is digitally produced means it is quickly adaptable to specific needs.

Visit Knoxville will introduce the vehicles this fall in limited runs at Chilhowee Park and the World’s Fair Park. “Tennessee is one of the first eight states to allow driverless cars on public roads. Knoxville is the town in which Local Motors 3D printed its first car,” said Local Motors CEO John B. Rogers Jr. “3D printing unlocks vehicle makers of the future to adopt technologies of the future faster than ever before. Therefore, it is no surprise that Knoxville, Local Motors and Tennessee would see Olli on the road first.”

The vehicle should make its debut this September at the Inov865 event and you’ll see it more routinely in 2018. Downtown history tours in an automated vehicle will be a likely early use. Knoxville will be the place that many people remember as the first place they rode in an autonomous vehicle. The future is here friends. Get ready.

Weekend note: I’ll be on the radio Sunday morning on WUTK, 90.3, streamed at http://www.wutkradio.com, with special guests Arum Demirjian, conductor of the Knoxville Symphony Orchestra and Christina Horn of Hudson K. Join us!