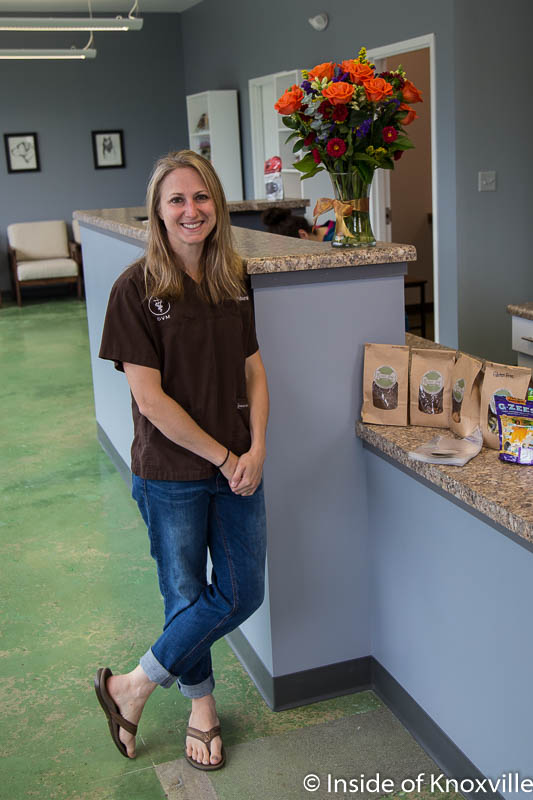 Riverside Veterinary Clinic has opened at 1111 Sevier Avenue, just a short walk or bike ride across the river. Given downtown and south Knoxville’s affinity for furry friends, it’s a welcome addition. Offering full veterinary services, there should be plenty of demand and Dr. Leah Wulforst is ready to start. The clinic received final approvals Monday and started seeing patients on Tuesday.

Born and raised in Oyster Bay, New York on a Long Island potato farm, she recalls digging potatoes in the summer and having cows and turkeys on the farm. Of course, New York City was nearby, so she had the best of both worlds. After graduation from high school, she attended the University of Pennsylvania in Philadelphia, originally planning to become a forensic pathologist.

While concluding her undergraduate work she assisted with some bulldog research and realized how much she enjoyed working with animals. After graduation in 2001, she enrolled in veterinary school at St. Georges in Granada, receiving her degree in 2004. Fatefully, the last year was spent on a clinical rotation at the University of Tennessee. She’d been attracted here when she read of UT’s relationship with Zoo Knoxville and thought she might like to work with exotic animals.

That all changed, though she didn’t know it until later, over a game of pool at Downtown Grill and Brewery. A chance meeting over the pool table started a three-day date with Aaron who would eventually become her husband. The two had been in bands, and so had music in common, but his father also had a business, AA Pad Co, which provides protective padding for numerous veterinary uses, among other things.

The two were married and lived in south Knoxville as Leah began work in a clinic in Seymour. After two years, the couple concluded she could do much better in New York and they’d be able to pay off the student loans more quickly. They moved into the basement of her parent’s home for the next six years. Eventually, she was working 70 to 80 hours a week. She paid off her fifteen year loan in seven years, but found herself exhausted with a new baby when Charlie was born.

She went back to work after taking a couple of months with her newborn, but quickly realized that her life balance was not what she wanted. After a 2 1/2 month stint with jury duty, working as many hours as possible and trying to care for Charlie, the couple decided this was not the life they wanted for themselves or for Charlie.

They returned to Knoxville in September 2013 and Aaron began working once more for his father and has since taken over the business. The found a couple of acres in the Rocky Hill community and now have goats, chickens and woods for Charlie to enjoy. She’s been a member of a west Knoxville practice for the last three years, but wanted to chart her own course and have the independence being the owner of a practice could afford her.

She wanted to integrate some alternative and natural medicine into the practice and will now have that latitude. “I can do the types of medicine I want to do,” she told me. She added, “I want to keep evolving with medicine and continue to grow. Now I can be totally honest with people and tell them three-year shots are acceptable. I like being able to educate people.”

As an added bonus, having her own space means she’ll also be able to bring Charlie to work when needed and she expects he’ll grow up knowing what it’s like to clean cages and do other jobs that have to be done in a clinic. “Once I decided to open my own place, I felt relieved and excited. I feel very positive when usually I am less so.”

Saying she used to regularly drive down Sevier Avenue, she was attracted to the area when looking for the right location. She looked at several buildings but knew this would be the one. When Patrick King of Wallace and Henry showed her this space she knew the 1956/57 building would be perfect with its 3,000 square feet, high ceilings and beautiful floors.

She got the keys at the end of December and originally hoped to be open by May 1. Joseph Construction, who she selected because of their experience constructing medical and veterinary spaces, did the interior work. The permitting process, coming in at about eight weeks, took longer than anticipated.

The facility includes a cat waiting room and a cat-only office, using Feliway to help the cats relax. She has two dog exam rooms and offers the full range of vaccines and vaccine titer. She has an isolation room for animals with contagious diseases and offers both well and sickness exams. She has in house CBC, chemistry for testing kidney and liver enzymes, urinalysis, glucose, full surgeries, spaying and neutering and some orthopedic procedures, though she recommends UT Veterinary Hospital for overnight stays with critical illnesses.

The equipment on premise includes full digital x-ray, ultrasound and a surgery suite, which includes a warm air jet patient warmer and LED surgery lights. She has an isoflurane anesthesia machine and a pulse oximeter for measuring heart rate and oxygen separation.

She says the connection for her with forensic pathology is the mystery of working with an animal that can’t respond to questions. She enjoys the process of interviewing the owners, working through a series of tests and helping animals move back to health. It’s probably telling that she refers to animals in the same terms others use for people.

The office is now open Monday through Friday from 8:00 AM to 4:00 PM, though that may expand later and the clinic will stay open for a later pickup if an animal has needed to stay for some hours after a procedure. She also makes house calls for animals with what she calls, “sensitive issues.” You can find them on Instagram @rvcknox, on their Facebook Page or at their webpage. You can also call 1-865-951-0094 for an appointment.