A Favorite Downtown Business Returns to the City 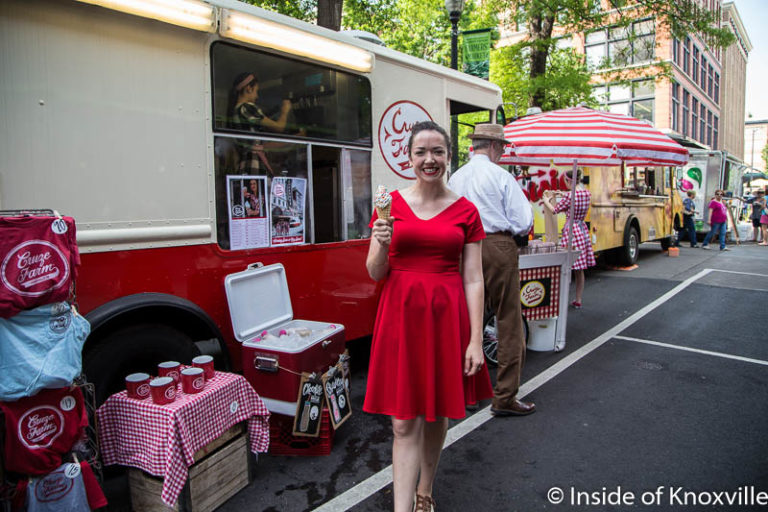 I’ve never seen anything like it in the years I’ve been writing about downtown businesses. Some businesses seem to hold a lot of promise, sometimes I’m not so sure. Sometimes I am pretty accurate in my assessment of their prospects and sometimes I’m surprised at their success  – or the lack of it. Last summer when Cruze Farm announced it would open a pop-up shop at 513 Union Avenue it ignited a reaction that didn’t stop until the store disappeared for the season. Lines often ran down the sidewalk and often stretched out the door well after the scheduled closing time.

It was hard to imagine it wouldn’t return after such a successful run and in recent weeks, as the weather has heated up toward ice cream time, rumors and speculation have heated up, as well. Guesses have run the gamut of all the places available downtown and a keen interest has been generated in the idea that this go-round might be permanent.

I spoke with Colleen Cruze-Bhatti over the weekend and she confirmed Cruze Farm will open another pop-up shop. The location announcement was actually cleverly included on the many receipts given for the ice cream sold at the Dogwood Arts Festival. Long lines formed before the truck officially opened and didn’t dissipate until the day ended – just like those at the store last year. Each receipt issued listed, “408 South Gay Street,” with the tag line, “Cruze Farm Opening May 18.”

Colleen told me there’s nothing that makes her happier than selling ice cream – because it makes everybody happy. She’s missed selling it all winter and has been working toward a shop in downtown. She also confirmed that there will be a permanent location, though the particular location is still a matter of discussion. Certain, however, is that Cruze Farm ice cream will be available from May 18 – September 15 at the former location of Archer’s Barbecue. After that, it’s not completely determined, though work has proceeded with McCarty Holsaple McCarty for a space design. For now, Colleen is considering her downtown options, but that Cruze Farm will establish a permanent presence isn’t in question.

The business will be a bit different from last year’s version. Cruze Farm hotdogs, which many had come to love through the Market Square Farmers’ Market will not be available at the pop-up store this summer. Colleen felt they were too time intensive to properly produce, contributing to the lines experienced at last year’s shop. While the new location will offer a larger amount of seating due to its much larger size, it will also offer greater outdoor seating possibilities with patio space available both in front of the store on Gay Street and to the rear on the promenade.

She’s also making plans to offer what she calls “fresh churned,” ice cream. She talked about how much better ice cream is directly out of the churn – and it also has less fat per serving because it has more air. For the rest of us, it’s what we might call soft serve and she’s working out the details of offering it at the new location. That may impact which and how many flavors are included, though they also may experiment with mixed-in ingredients and toppings. Use of a soft-serve machine should also speed up service time.

When the new store opens in two-and-a-half weeks, the hours will be longer than those offered last year. The store will open at noon seven days a week, closing at 10:00 PM on Sunday nights, 11:00 PM through the week and at midnight on weekends.

So, we’ll be able to get our Cruze Farm ice cream fix starting in a couple of weeks at 408 South Gay and afterwards we’ll be able to continue the relationship on a permanent basis at a location to be announced at a later time. Stay tuned.