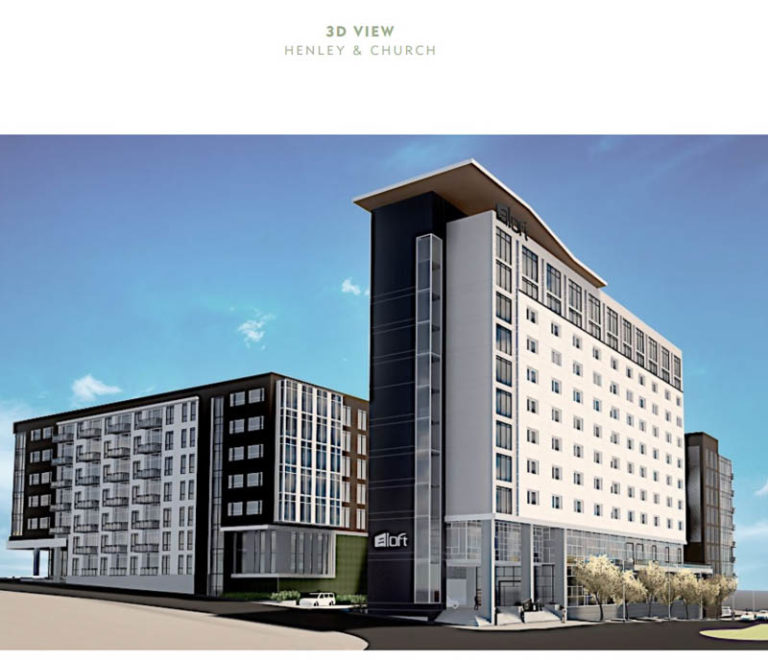 The city of Knoxville sent out a request for proposals for redevelopment of the Supreme Court Site, received four, and has selected one to move forward. The selection process was held outside public purview in order to allow negotiations to be conducted with each applicant independently. The proposal by Rick Dover and Dover Development, in conjunction with other agencies was selected. It’s another step in developing the city block bounded by Locust, Cumberland, Henley and Church which includes the old Supreme Court building on one corner and a surface parking lot on the remainder.

The three proposals not selected:

Commercial and Investment Properties with principals of the Cazana family, currently developing The Tennessean would have provided, “70 luxury apartment residences, 100,000 square feet of modern retail and office space, 425 parking spaces, Street-level retail spaces along Locust Street, and restaurant space with outdoor seating at the corner of Locust Street and Church Avenue.” It would have emphasized commercial office space. As proposed, it would have been a ten-story building. (Full Proposal Here)

Marble Alley Development proposed, “a five story, mixed use development project that will include 150 residential units and approximately 30,000 square feet of educational use.” The ground-floor along Church would have been “live/work” spaces and 2500 square feet of retail would be included at the corner of Church and Henley. It would have included 185 parking spaces in a below-grade parking garage and a STEM center to be used by local middle and high schools, as well as the public library. (Full Proposal Here)

The proposal selected to move forward was a proposal by Dover Development, Rick Dover principal (Full Proposal Here). They have proposed, “the existing Supreme Court Building at the site’s southeast corner will remain and be repurposed as a restaurant.” A dog daycare will be included at the basement level. The tower portion of the building, “will be demolished along with the rear bays.” An eight story Aloft hotel is proposed fronting Henley Street. A “residential component is comprised of five stories above the cast-in-place podium construction of parking and ground-level retail space.”

The over 200 apartments included will range from studio apartments to two bedrooms. The upscale units will target professionals. The hotel is projected to provide 90 jobs with a $1 million+ payroll. The apartments are projected to provide seven permanent jobs worth about $370,000. Additional jobs should be provided by the retail space and restaurant. They are offering $2.6 million for the site.

The Aloft Hotel would be a 170 room hotel managed by White Lodging. 230 apartments would be included in that portion of the development and the restaurant in the previous court chambers would be, “conceived and operated by Randy Burleson of Aubrey’s, Sunspot, Bistro by the Tracks and other. Also proposed is a “bike-share and tourist information center to be operated by Legacy Parks, who will be provided space at no cost by the developers.”

The pet day care would be operated by Petsafe and would include space in the basement, but also outdoor facilities on the roof of the building. Also included would be, “up to 8,000 square feet of flexible meeting space that can be reserved and used by anyone.” The developer, “anticipate(s) putting solar farms on the roof of all of our buildings and possibly the parking.”

On the city’s evaluation rubric, the Dover proposal scored 102 points out of a possible 110 in four categories: Consistency with Stated Mixed Use Vision, Financial Capacity and Business Plan, Qualifications and Experience and Goals for Sustainability. The second-place proposal, that by Commercial and Investment Properties scored a 92. (Full Evaluation Here)

The next step is a council workshop this Thursday at 5:30 PM, with the development agreement to be on the agenda for the April 25 City Council meeting. The schedule for completion, depending on prompt approval from City Council, would be late 2019.