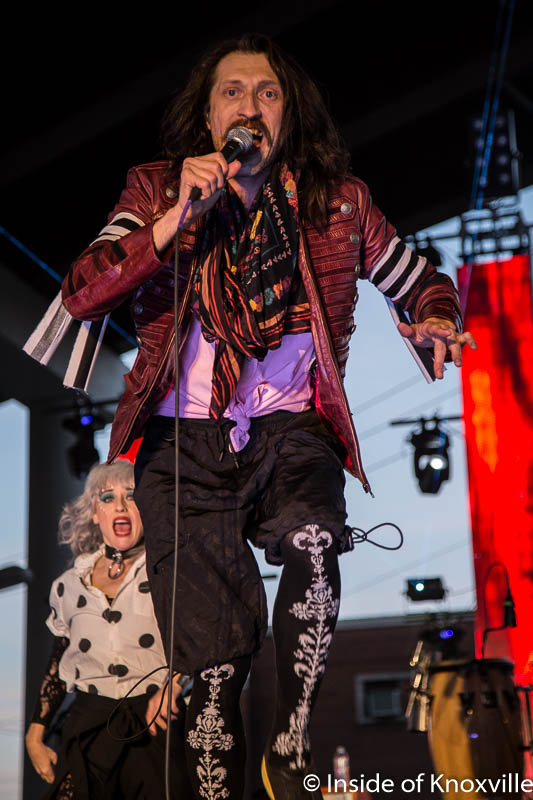 I’ve been a bit slow getting this out and I appreciate your patience. After shooting over 1100 photographs and taking in about twenty-five hours of premium entertainment over a fifty-hour period of time I was happy and exhausted with big plans to get an article out Monday afternoon. Then Urban Boy got sick. Suddenly, I had a not-so-helpful, though sweet business partner for two days. Hence the delay.

It all got started on Friday afternoon and, as always, I laid out my strategy, picked the path I would follow for the next few days and quickly watched it fall apart as I changed my mind, grew too tired to move to the next venue, or realized I couldn’t resist a different path. I’d decided to focus on non-local music as I see so much of that on a regular basis, but my friend Tony busted me on violating that the first night. You just have too much talent, Knoxville. I can’t quit you.

I’ll focus in on some of my favorite artists, though so many were great that I can’t do the justice to each that they deserve. I also really enjoyed much of what happened off-stage and I’ll tell you about some of that as I go. The festival really turns out to be such a beautiful spring reunion, of sorts, for so many local artists and members of our cool, little community, that it’s hard to beat just hanging out in the Old City. The music is almost a bonus. But the music definitely matters. I’ve made a number of purchases for myself and my business partner to groove to for the last couple of days. I’ll tell you about those, as well. I’m still buying.

I started out with Nora Jane Struthers and the Party Line at the main stage Friday afternoon. It was a nice intro to the festival and I was able to hear her a couple of other times during the festival, once at Barley’s and as part of the Midnight Merry-Go-Round on Saturday night. Knowing I would see her again, I slipped out to hear local artist, Will Carter at the Lonesome Dove courtyard. If you like your music gritty and real and served up with a side of country and excellent guitar, he’s your man. I’d heard him perform a couple or three songs on Market Square and it stuck with me. Thanks to Roger Harb for hooking me up with a complimentary CD.

I returned to the main stage to hear Nikki Lane deliver her edgy brew of country music-meets-plugged-in-singer-songwriter. Excellent lyrics, a tight band and a cute red coat that had everybody from my wife to Aaron Lee Tasjan taking note, it was a very good show. At that point, however, I decided to go small stage for the rest of the night. I started by, again, violating my plan to see non-local artists, by slipping into a secret show at Pretentious Glass on their rear patio, with two members of Three Star Revival delivering an excellent set. Am I alone in feeling that the backdrop to the performance stage at Pretentious is the best backdrop in the city?

I then made a couple of decisions, both intended to help me make it all the way through to Sunday night: I attended back-to-back shows at Boyd’s Jig and Reel, one of my favorite spots to hear live music and then I called it an early night at around 10:30. This gave me two shows where I could sit in a comfortable chair and an early bedtime to prepare for the next two days.

But those shows. They may have been my favorite two back-to-back performances of the weekend. Zoë Nutt is a singer-songwriter with local roots whose voice is as infectious as her cute stage presence. I kept humming her songs after I left and she represents the first purchase I made. Her 2016 album, “Like You,” is a wondrous experience of fine songwriting and intimate vocals. Haley Cole, my final show of the night, took my breath away with her incredible vocals and excellent songwriting. With more of  a gritty, aggressive style, in a country music vein, hers was a great show to take home with me. She’s recently toured with the Black Lilies and it’s easy to see why they wanted the pairing. Her most recent CD is a couple of years old and I’ll look forward to her next.

I moderated a panel Saturday morning at 11:00 AM on Publicity and Social Media and could not have had a better mix of panelists. It was a lot of fun. I took a break before picking up with Birds of Chicago on the main stage and I fell in love with the harmonies of Allison Russell and JT Nero and the guitar work of an extremely talented female guitarist whose name I can’t find anywhere. I picked up their 2016 release, “Real Midnight.” Highly recommended.

I slipped off the main stage for consecutive shows at Jackson Terminal with The Lawsuits and John Moreland. I squeezed a secret show with The Royal Hounds in between. The Lawsuits are what rock and roll is all about. No frills, straight-forward albeit in this case with some pop melodies infused along the way. I think of them – though musically different – as this year’s Banditos find for me. Fell in love with Birmingham’s Banditos last year and with Philadelphia’s Lawsuits this year. I bought their 2016 release, “Moon Son,” and love it. Also love at first listen with Oklahoma singer-songwriter John Moreland. His gritty vocals and lyrics meet somewhere between Tom Waits and Steve Earle – a clear influence. I bought and love his 2015 release, “High on Tulsa Heat.”

Saturday turned out to be a great day for me. Fresh off all those bands I loved, I returned to the main stage to hear Lee Fields and the Expressions whose revved up soul sound made me wonder how I’ve missed them all these years. He’s described as the closest thing we have to James Brown. It was another of my favorite shows and I’m loving their 2016 release, “Special Night,” and I’ll likely follow it up with more of their catalog.

And then came Gogol Bordello. There are no words. One of my friends compared the experience to an intimate physical act between to people (or more!). And an aggressive one. Honestly, I felt like I was shooting my camera in self-defense. They stormed the stage in a spray of wine and energy that never stopped flowing until they disappeared into the night leaving behind a stage and audience covered with the wine and wondering what had just happened.

Loosely categorized as “gypsy punk,” the band certainly has a punk feel, but with an according and a strong Romani vibe. Dressed somewhat like pirates and led by Ukrainian-born vocalist Eugene Hütz, the band exuded a pirate-worthy aggression that suggested you didn’t want to be caught in its path. I forgot to change lenses. I forgot everything. I have no words to describe the spectacle. I thought of how Alice Cooper must have hit his first audiences. It was crazy and it was fun.  A must see show that the audience seemed to love (minus Urban Woman who’d had enough after a song or two and went home). Lots of people sang the lyrics and knew the right spots to respond. Amazing.

I finished the night by slipping into Barley’s to hear a little more of Nora Struthers and the Party Line before ending the night after 1:00 AM with Peak Physique and then the beautiful Midnight Merry-Go-Round 90’s Night celebration. Organized and backed by Jonathan Sexton and his band Teen Spirit, the night featured a rotating guest list which included many of the headliners from the festival as well as local musicians. It was a night that showed both that our musicians can share the stage with anyone and that, once again, Knoxville is a great city and we take care of each other. Lots of hugs and love in the room between many people who are genuinely fond of each other.

I interviewed Renee Hoyas on WUTK’s KnoxCentric the next morning (podcast here) and had a great time talking with her. Check out the podcast. I started the day at Jackson Terminal with Bonnie Bishop, slipped in on Daje Morris at the Lonesome Dove Courtyard and then hit the main stage with The Royal Hounds. I cut out for Aaron Lee Tasjian at Jackson Terminal, Shayla McDaniel at Pilot Light, Sally and George at Jackson Terminal before returning to the main stage for Ruby Amanufu and Steelism. Back at Jackson terminal I caught Parker Millsap, before returning to the main stage for a final listen to Aaron Lee Tasjan.  I heard the Thrift Store Cowboys at the Lonesome Dove Courtyard and then settled in for Young the Giant and, I think, a well-deserved glass of wine to end the festival.

Takeaways from the final day? We have two budding local stars in Daje Morris and Shayla McDaniel. I bought Shayla’s EP, released earlier this year, and have really enjoyed it. My other love from the day is Aaron Lee Tasjan. He’s a folk singer. And a singer-songwriter. With a streak of glam-rock. His lyrics are piercing and his guitar playing won him an Ellington Award for jazz playing when he was shy of his teen years. He’s for real and his 2016 release, “Silver Tears,” is an excellent example of some of the finest music being made. Apologies to Bill Foster for not picking up on his year-end recommendation and finding this guy much earlier. It was my final purchase of the weekend (so far).

I took over 1100 photographs and kept just over 400 of them. These are not necessarily the best, they are just some that help tell the story. I will (very soon) have the full collection on the Inside of Knoxville Facebook Page. Many of the photographs are of friends and great members of our community I spotted on the street. I’ll try to tag you, but feel free to tag yourself. Thanks to Dogwood Arts, Chyna Brakeen and the army of volunteers and sound people who made this another fabulous Rhythm n Blooms.

Also, thank you very much to all the people who had such kind words about the work I do. It means a lot to me that this blog matters to you. Watch for the photographs later on and I’ll be back to a schedule as rapidly as possible.