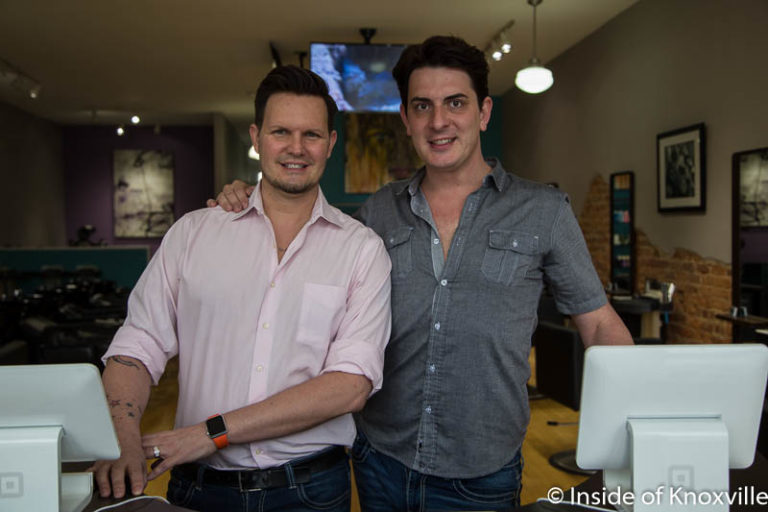 A number of you have noticed that Local Motors has left downtown and its 11 Market Square Address. Both when I first wrote about their opening and when I wrote about their retail re-boot, a number of you questioned the long-term viability of the retail store-front viability. When the re-boot happened, I was hopeful. The promise of test-drives in their 3-D printed cars was exciting. It was not to be.

A recent spate of closures in the company included the Market Square location. Their new manufacturing facility in west Knoxville seems better suited to their business model. They also closed a retail location in Las Vegas and one of their manufacturing centers, and in the course of the closures, laid off a number of employees.

Right about the day the notice of its closure went up on the Market Square location, Jared Hollyfield and Dustin Stewart stopped off in Market Square for lunch. About to leave on a vacation, they immediately put everything on hold and called David Dewhirst who has helped make everything happen. Dustin said, “We have to make this happen.” It was a full-circle moment for the couple and a stay-cation ensued that included more planning for a new location for Rock Paper Hair Studio than actual vacation, though they said they took the time to purchase and ride bikes and get to know the city better. Why this move was so important to them is a longer story.

Jared is from Morristown and moved to Knoxville in 2003. He’d grown up coming here to shop and had attended the Tennessee School of Beauty in Morristown, so when it came time to start his career, he came to work at Salon Azure. After switching to Salon Visage at their west location, he learned a month later they were opening a salon on Market Square. That business opened in 2006 and Jared was there from the beginning. The location? 11 Market Square.

Dustin was born and grew up in Harlan, Kentucky, but at eighteen-years-old, he moved to Knoxville. He subsequently moved around a bit, started doing hair in 1997, and ultimately decided that Knoxville felt more like home. Upon his arrival back in the city in 2007, Jared took him to lunch. Friends from Dustin’s previous time in the city, Jared introduced his old friend to the owner of Salon Visage who offered him a job at the Market Square location. It was at 11 Market Square that the two worked together and eventually became a couple.

In 2009, with changes underway at Salon Visage, the two went to work out west at Natural Alternatives, returning to work as mentors at Studio Visage, a new incarnation of the previous business at 11 Market Square. Wanting the independence of their own shop, the two opened Rock Paper in west Knoxville in 2014 and, as soon as an opportunity presented itself, they opened their current location at 714 S. Gay Street. They’ve done well, but wished they could be more centrally located. The timing could not have been better for them, as their three-year lease concludes this spring.

They love the energy on Market Square. Jared mentioned, “looking out your window and seeing stilt walkers,” and other craziness that holds an appeal for them. Additionally, they have been restricted by the size of their current shop. Even with the construction that marked much of their time on the 700 block, they’ve seen lines out the door. The new location will enable them to move from six stations to fifteen, keeping their current services and potentially adding more.

They hope to have the entire move completed by May 1 – an ambitious goal. Jared and his father did the bulk of the build-out in the current location and they will do the same on Market Square. With 2300 square feet, it is a significantly larger job. Jared said the larger space should allow them to give people appointments more quickly. They’ve already hired a couple of new people and are looking for more, though they pointed out they want the right people, so some stations may remain open for a while. If you are interested, they suggested you contact them.

It’s also going to make things simpler for their customers. Unfortunately, many of their would-be customers – women who have used them before – have hesitated to come to a downtown location that doesn’t have “Market Square” in the address. They know the Market Square garage and this will make it easier for them. It will also save them money as they’ve re-reimbursed customers for parking in the paid lot across the street and now will do so for the much cheaper Market Square Garage

Working from the 700 block for three years, they still hear people say, “I miss you being downtown.” It’s been a source of some frustration. Parking hasn’t been an issue for Urban Woman, who has loved the guys from their previous Market Square stint, but her commute will now be cut from about seven blocks to about two, so she’s happy.

The hours will remain the same as at the current shop: Noon – 9:00 PM Tuesday and Thursday, 10:00 AM – 7:00 PM Wednesday and Friday and 10:00 AM to 5:00 PM on Saturday. All your favorite stylists will make the move and, in fact, are the same staff they’ve had for three years. Dustin will continue to do color and Jared to cut. Saying they, “have an emotional attachment to Market Square and that space,” the two will return to where they renewed their acquaintance, worked together and became a couple. It marks a full circle, of sorts, with the added sweetness of returning as owners of their business.

They plan to have an open house on First Friday in May – which also happens to be Cinco de Mayo, so Market Square should be hopping. Artist Dani Flyckt will be featured for the event. Look for them on Market Square very soon.