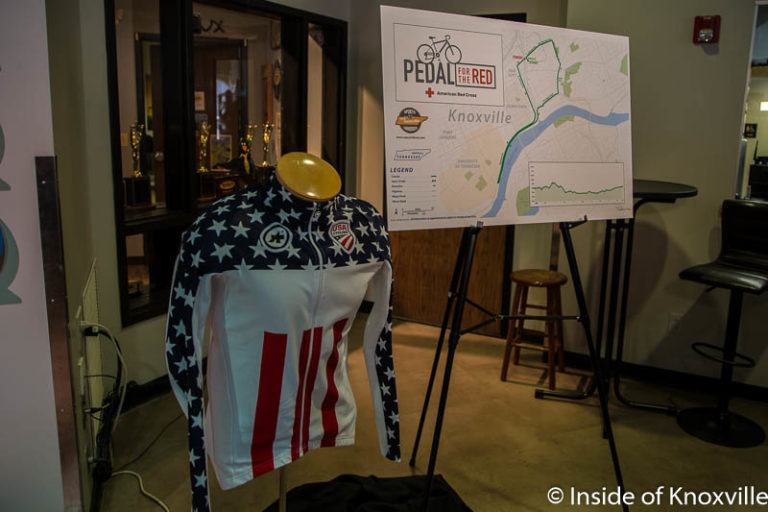 In a great coup for Visit Knoxville and the Visit Knoxville Sports Commission, the USA Cycling Pro Road and Time Trial National Championships will be held in Knoxville, with courses starting and ending in the Old City on June 24 – 25. The courses were unveiled in a press conference at the Visitor Center, yesterday. In attendance were Mayor Burchett who touted Knoxville’s beauty and people, saying how pleased he is to have the event in downtown and South Knoxville.

Actually a series of events, the weekend kicks off with the Pedal for the Red, sponsored by and benefiting the American Red Cross. At 7:30 AM, amateur cyclists will be able to experience the same route over a closed road the time trialists will cover later that day. The event is family friendly and participants are expected to set fund-raising goals and encourage friends to support them.

A cycling expo starts during this first event. Located under the James White Parkway just outside the Old City, the two day expo will include exhibits, cycles and all manner of gear. Opening at 9:00 AM on Saturday morning, it runs until 4:00 PM, running Sunday from 8:30 AM to 6:15 PM. Watching the race is free, but VIP passes are available.

At 9:30 AM, the day gets a shade more serious with an amateur race on the time trial route, with participants covering one loop of the route, or about 4.8 miles. At 11:00 AM, the professionals take off with the women’s time trials over the same course, but repeating the route three times for a total of 14.4 miles. The professional men begin at 2:00 PM using the same route, but making four laps for a total of 19.2 miles. Medal ceremonies are held at 4:00 PM.

Sunday morning opens with the women’s professional race, running 67.4 miles and looping through south Knoxville via the Gay Street Bridge and back across the South Knoxville Bridge. The route is 7.9 miles and women will cover the course eight times for a 63 mile race. The men’s race starts at 1:15 PM, covering the same route 14 times for  a total of 109 miles. Lauren Hall, a professional rider with the United Health Care team pointed out that one section of the loop on Sherrod Street features a half mile climb with a 14% gradient. It’s a potential peloton killer as the miles add up. The race is expected to attract some of the finest cyclists in the world, with a number taking a break from the European circuit to participate in the national championships in Knoxville. Last year’s winner and defending national champion, Greg Daniel is, coincidentally from Newport, Tennessee. After winning last year, he received a lucrative professional contract with a European team. He’s expected to be on hand, and Megan Guarnier, the number one female cyclist in the world has confirmed. Last year’s race included Olympians and a number of this year’s participants will likely join the Tour de France later in the summer.

Micah Rice, VP of Events for USA Cycling was on hand and said the group really wanted an urban environment, plus challenging hills and Knoxville, with its proximity to the mountains seemed the perfect spot. He noted that the local cycling organizations have been very helpful in making this happen. Chad Culver of Visit Knoxville’s Sports division lead the recruitment of the group, saying the conversations had gone on for a long time, but when it culminated in the offer for the national championships everyone was very excited. He said, “Road cycling has such an international following and this gives Knoxville an opportunity to showcase ourselves as well as these professional athletes.

The winners will be given specially designed jerseys noting their championship. Those who follow the Tour de France and other races understand the pride that comes with pulling one of the jersey’s on in the award ceremony. Megan Guarnier, a multi-championship rider, said, “Wearing the stars and stripes of the U.S. National Road Champion is a huge source of pride. It is a reminder of the hard work that I’ve put in day-after-day, year-after-year.”

And the entire event is a testament to how far Knoxville has come. When I moved to the area in 1982 bicycles were not a common sight. Now they are part of everyday life in downtown and surrounding neighborhoods. With the advent and expansion of greenways, trails, bike lanes and high profile efforts like the Bell Helmet grant to build the Devils Racetrack downhill course, events like Tour de Lights and, now, the U.S. championships, Knoxville must be getting on the radar of both road and mountain cyclists nationally. It should be a source of pride for the city.

For those of us who geek out for weeks during the summer watching the Tour de France or other international races, it is a rare opportunity to see a peloton up close and personal, to see if any cyclists are broken by our own climbs and to witness the highest caliber cyclists in the country and the world. Could the new biggest sporting event in Knoxville’s history be a cycling event? Maybe a few big orange fans would scoff at the idea, but it’s the only national championship which will take place here this year, so there is that. I can’t wait.

You can find complete details here or here.