Rala is Open for Business at the New Location: 112 W. Jackson 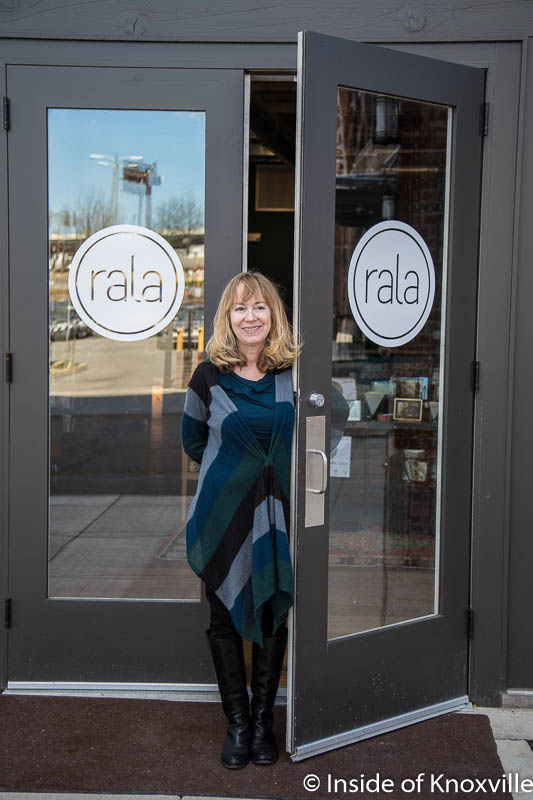 Last December, Nanci Solomon, owner of Rala, announced that the business would leave its home of seven years on Union Avenue for a new location in the Old City. The decision came on the heels of the owner of the building deciding to convert the retail space to residential. It marked not only the end of Rala’s seven-year run on the street, but also of Nanci’s roughly thirty years in business on the street at multiple locations.

After a struggle to find a new location, she found a new home in the Daniel Building in the Old City at 112 W. Jackson Avenue. She said at the time she was, “thrilled to announce our expansion and move to the vibrant arts district of downtown Knoxville.” The location is just down the hill from the galleries on the 100 block of Gay Street and across the street from the Dogwood Arts offices. Nanci said she just feels the connection with artists will be a very strong one that should make the business better than ever.
The new space is also larger, but feels even larger, still. With high ceilings and abundant light, the space gives the art it holds the temporary home it deserves. Of the larger space, Nanci said, “The larger space will allow us to hold events, add contemporary home goods and accessories, expand our greeting card selection and feature more original art. We look forward to joining our new neighbors in the burgeoning Old City area just in time for the celebration of art on First Friday in March.”
Nanci told me that it feels good to follow all the workers – many of them women – who worked at the sewing machines in the building, plying their trade. She said it felt like home from the beginning and the helpfulness of so many made her feel very welcome in the new space. She brought a door from the old space to have a touch of home.  The landlords sent Makers Donuts and a friend sent coffee. While we talked, Paris Woodhull rung up the first sale and it really did feel like the right place for the business.
Solomon worked with local artist and architect, Brian Pittman, of Johnson Architecture, Inc on the design of Rala’s new space. The Daniel partners, Ron Turner and Jon Clark, managed the build out. She said the move went well, though with a few hiccups. They had aimed for a March 3 opening for First Friday from the time they knew they would move and they made it just in time.
She had a funny encounter with two guys from Texas as she tried to quickly move a load of merchandise into the new space. They jumped in to help, saying they were just wandering about the city. Later that day they saw her moving items from the old location into her car and helped, again. Their kindness made the move a happier one.
Rala will continue to feature products from Knoxville artists and makers and a artists from around the world. You’ll continue to find the the art, cards and gifts for which the other store became known, but they will be able to stock more of it. Brian Pittman’s cathedrals, Cynthia Markert’s women and many others, including this month’s artist, paintings by Sarah Moore, which you see pictured here, and much more will be available.
Like their Facebook Page, check out their website, follow them on Instagram and drop in to say, “hello.” Hours of operation will remain the same: Monday – Saturday 10 a.m. – 9 p.m. and Sunday 11 a.m – 6 p.m.