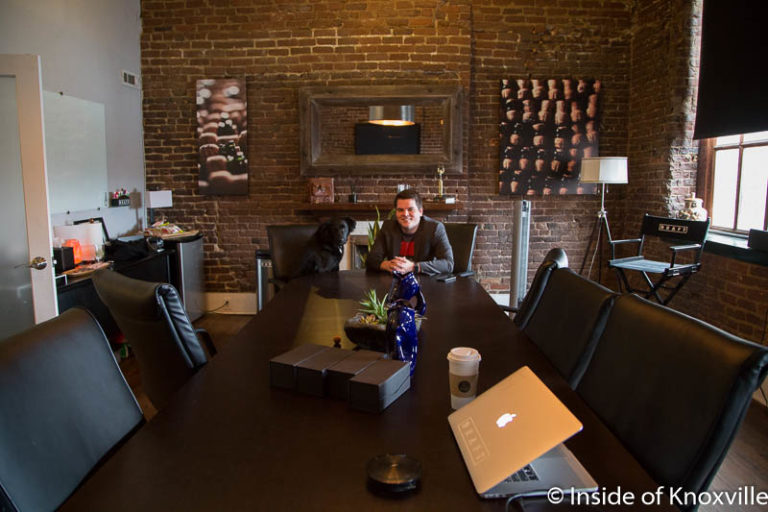 You may be like me when I first heard mention of “Draft,” or the Draft Agency. I thought, “is that downtown?” It turns out the company has been downtown for nearly five years, but they’ve undergone quite a bit of change, including a name change. Like me, you may know them by their former name, Jaopro. I met with President, owner and CEO Alex Oliver to learn more about the company and the changes they’ve been through.

Alex welcomed me into the cool space the company occupies with an off-handed charm that probably reflects what he later confirmed: He’s “humbled” by the fact that so much has happened so fast to his company and that he finds himself in this position at such a young age. He’s twenty-seven years old and he heads a company which will celebrate its tenth anniversary this May with an event at the Standard. It’s heady to think of starting a company at seventeen and taking it this far in ten years. I asked him to tell me how that happened.

Born in Knoxville, raised in Halls, Alex has only spent one year of his life living outside Knoxville. He recalls his parents telling him to, “find your passion and make it a career.” They encouraged him to express his creativity, allowing him to paint the walls of his room with his art – even to the point of painting the blades to his ceiling fan. He immersed himself in art – particularly video art. He also worked – starting at age 15 to work for Aubrey’s.

After high school he attended UT and did some work at Pellissippi. Already doing videography, his company was underway and after taking classes in enterprise management – he realized the need to know how to do the business end of his creative endeavors – he left school for a job in Jackson, Wyoming with Teton Gravity Research, a production company which focuses on skiing videos. He knew he could learn from them and help launch his career.

Other than encouragement, his parents left it to him to find his way professionally, so he felt the urge to move into his career as quickly as possible. For his year in Jackson he lived frugally (in a hostel) and learned not only production techniques, but also about hardware and software that would be useful. He began to collect what he would need to make his company successful.

He also learned about life/work balance and admired the attitude of the company which was to take chances, learn from it if it failed and to move on. “No one tells you the standards or prices for the industry,” he said, noting that the more he learned the more he understood how much more there was to learn. The company has a philosophy, which he has taken to his own company, which is to share skills freely, knowing that this way everyone gets better.

Returning to Knoxville after a year, he focused on stitching together as many production jobs as he could get. Operating out of his grandmothers home – complete with 50s decor, including the ducks you see in the photo included here – he lived and worked there after she was moved to assisted living. Though his primary passion was action sports film, he took all kinds of work saying he loved any job that allowed him to be, “paid for being behind a camera.” Acknowledging that advertising has the capacity to fund artist endeavors and that advertising can be artistic, it became and remains a focus for the company.

In 2011 he found himself exhausted and realized that he had to make a decision and that to continue to pursue his vision would mean hiring someone to help him. He brought in Brian McNew who has been with him since – retaining employees is something he’s proud of, saying he wants people to come to work at Draft with the idea of finishing a career with the company – as Vice President and Chief Creative Officer. The two worked together in his grandmother’s home which he describes as a bit like Elvis’ Jungle Room with pink curtains and floral couches. By that time, it became obvious that grandma’s house wouldn’t work for the rapidly expanding company.

Leigh Burch made him an offer he felt was too good to refuse on the space at 120 and it became their new home. Continuing to expand, he added his father, Rogan, to lead media placement efforts, now Senior VP Marketing, his brother Nick, to assist with digital media strategy, now VP Marketing and Blake Waring for business strategy, now VP Operations. Eventually he moved to his current staff of twelve employees. He said it isn’t a family business, but it has come to include a lot of family, which is something he would not have foreseen. Last year they incorporated the adjacent space at 122, which had recently been Bootleg Betty, to build a production studio.

Alex says the move to Gay Street made them feel like a legitimate company. It also gave them credibility in the eyes of the companies they approached and to whom they pitched. The role the company played in projects began to expand into concepts, scripting and taking an idea from beginning to end for their clients. Alex realized his little production company had become an advertising agency and decided the time was right for a name change and so, Jaopro (his initials are the first three letters) became Draft in March of 2016. They chose that name to reflect the reality that they are constantly in draft mode, with its connotation of developing something new. He also liked that it had a nautical allusion.

He’s always been interested in boats and water and had a fascination from a young age with a sort of Huckleberry Finn idea of traveling by boat through the length of the Tennessee River. In the company’s most audacious creative side-bars, he and a group did just that. Of course, they documented it, producing the nearly two-hour film, “Voyage.” Making its debut at the Bijou, the film rose to #11 on the itunes documentary chart and increased the profile of the company.

They’ve continued to make fun videos for their own creative pleasure, once a month coming together for what they call Draft Mode to set their creative spirits free a bit. Sometimes those videos change into something useful, such as when they recently did a video with a cat theme and realized it could be used as a spot for Young-Williams, who loved the idea. The spot gained a lot of attention for a good cause on social media.

Recently, companies are asking them to develop the concepts and execute them fully. They’ve completed major contracts for Clayton Homes and helped link their brand to Duck Dynasty which was a great success for them. They’ve worked with ORNL, Malibu Boats, SeaRay and others. There’s a good chance you’ve seen some of their work without realizing a local company produced it. In an example of coming full circle, Alex has gone from doing a bottom-level job for Aubrey’s to representing their brand with his company.

Along the way, he married Jamie and they have a child coming in August. The family continues to grow and so does the success. The company recently won four gold awards at the Addys and shared one with Elastic Pictures which I profiled earlier this week. I’m including some of their work here for your pleasure. I think you’ll agree the company is another local example of very creative, young entrepreneurs making Knoxville a better, more interesting place.