Outside Mullingar Opens Tonight at the Clarence Brown Theatre 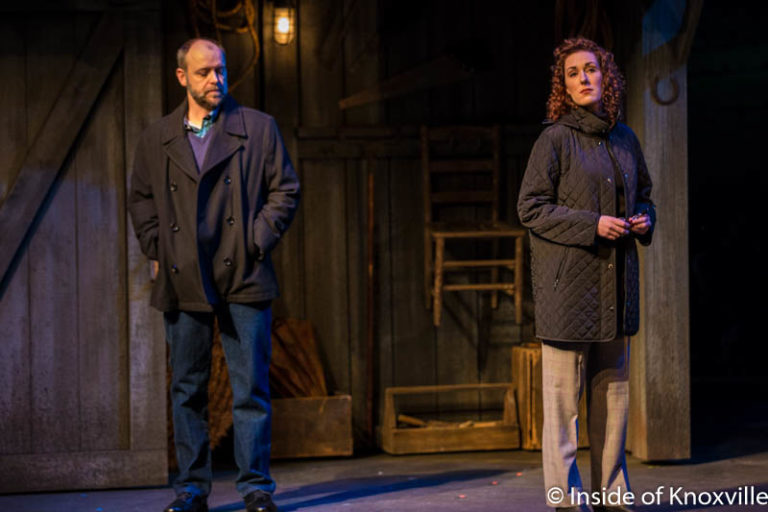 The second half of the 2016/2017 season at Clarence Brown Theatre opens tonight with “Outside Mullingar.” Billed as a romantic comedy, the play is directed by Kate Buckley and was written by John Patrick Shanley. In it’s 2014 Broadway run, it was nominated for a Tony Award for Best Play and was nominated by other groups for various awards.

Set in the midlands of Ireland, the play opens with an elderly man and woman – who each own neighboring farms – speculating as to what will happen to their farms when they die. Each want to control the farms in different ways. The woman wishes to ensure her daughter’s security on the farm and the man wishes to sell his farm to his nephew, insisting that his son doesn’t love the land as he should, though he has entered middle age still devoted to making it a success.

Their children, now growing older themselves, are the focus of the unlikely love story. She’s harbored secret feelings for him since they were young, though he is oblivious to the fact and harbors passion for a young woman he loved when he was in his teens. The families have an unresolved feud that dates back thirty years, which also must be overcome for the couple to find love with each other.

While the humor is present and the love story hovers like an inevitable presence in the room, I couldn’t help but notice the deeper themes. What does a family owe to future generations? To past generations? At what point does the land we own become the land that owns us? How does one overcome bitterness and betrayal? How does a person find their place in the world? How do we break provincial bonds that dictate our actions from an early age?

As always, the acting is superb with accents emphasizing beautiful language. The sets are simple and authentic and costuming pitch perfect. It’s another compelling performance in the theatre that makes us all proud. The photographs you see here are from the final dress rehearsal.

This production marks the beginning of the Clarence Brown Theatre’s new season. Other productions to follow include, “The Busy Body,” “Top Girls,”and  “Around the World in 80 Days.” “Outside Mullingar,” runs through February 18 and tickets may be purchased here. Recent productions have sold out numerous nights, so buying early is advised.