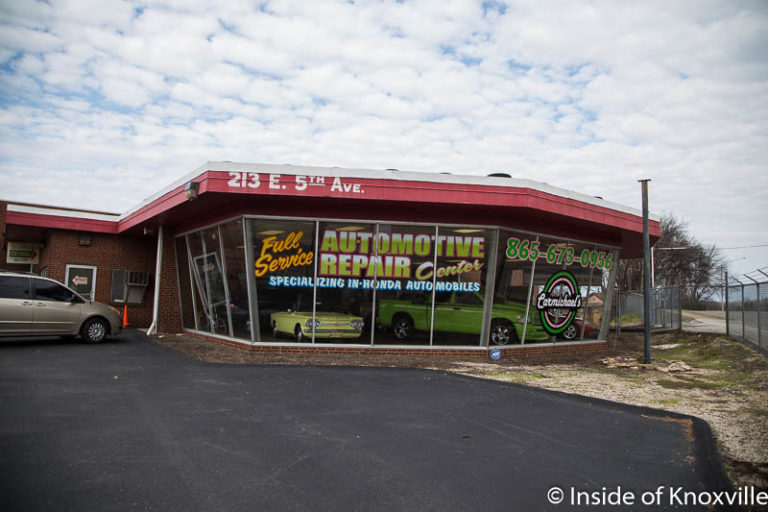 Unless you’ve had a car repaired there – and many people have over the years – you’d not likely be familiar with the building at 213 E. Fifth Avenue. Should you have reason to drive east on Fifth Avenue past the old Knoxville High School, future home of senior housing, you’d pass it on your left in the middle of the next block. Carmichael Automotive Repair Center has held that location for fifty-seven years and is now in the hands of the third and fourth generations of the family to do business there.

A.C. Carmichael is proud of his family’s years in the spot which started as a Volkswagen dealership and shifted over the years to Porsche/Audi and Honda repair. The design of the building with its large bay windows on the front side was one of several offered as options by Volkswagen at the time it was built.

To the rear of the prominent showroom is a large repair center and below is a basement of equivalent size. The family has decided to shift the business to the basement – which due to the slope can be entered at ground level behind the building. Hoping for a facade grant to improve the front, the family plans to pursue other uses for the street-level space. A.C. said they’d like to see a restaurant in the former showroom. An adjacent building owned by the family will also be made available to a new business.

So what will fill the emptied garage on the street level? If Bonny Pendleton and Theatre Knoxville Downtown find a way to make it happen, it will be their group. I’ve written before about their need for a larger and more functional space than their current location at 319 N. Gay Street. The forty-one-year-old group has simply outgrown the location they’ve inhabited for the last decade. Their Second Act campaign, launched in late 2015 has raised nearly $50,000 toward a move. Until recently they had not identified a space, which made estimating the amount needed very difficult.

With the identification of the Fifth Avenue space, they were able to ask the East Tennessee Community Design Center to draw plans, which enabled them to project costs more accurately. The total for everything in the plans and renderings you see here, provided by the design center, they will need a total of approximately $270,000. $100,000 would get them started on the new space.

It’s a tall order for a small community-based theater company, but they do have about 20% raised and they are pursuing grants and have fund-raisers planned. Should a local philanthropic organization see fit to underwrite a significant portion of the expense, that would certainly be welcomed. The Randy and Jenny Boyd family has been very supportive. Individuals interested in supporting the campaign may do so here.

The vision for the new space includes keeping many of the industrial touches you see now, including the original garage door. The photograph of the garage does not show an additional quarter or so of the space, which is behind the door on the far wall. The wall will be removed to open up the room for the theatre and its various components, such as dressing rooms for the artists and bathrooms they can use during the performance (not possible in their current location). Seating for approximately 120 people will be a big improvement over the current location.

It was important to the group that they find a location which would enable them to continue their downtown connection. This particular address fits the city’s development plan and continues the recent trend of moving the edges of downtown to the north toward the Fourth and Gill and Old North neighborhoods. The only Knoxville theater group providing year-round productions, they hope to expand their relationships with other businesses and the city.

They feel strongly they have made a forty-year investment in Knoxville and want to expand and grow that commitment at the new location. It certainly would appear to be an area that could support them as they continue to grow. Consider making a donation (the Paypal link is on the upper right corner of their website) and definitely catch one of their productions if you haven’t already. Their provocative production of “Clybourne Park,” starts tomorrow (Friday) and tickets are just $15.

And cruise by to check out the buildings discussed in today’s article. Very close to Knoxville High School, The Mews and other northward developments, it seems like a great location for the right set of businesses.