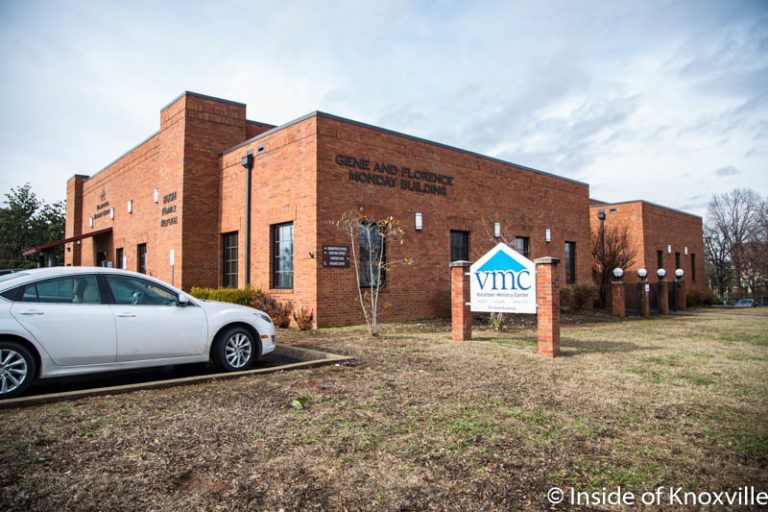 Like many people, I’ve been aware that we have agencies along Broadway who work with homeless populations. As much as any, however, I’ve been unclear regarding the roles they assume, their differences and how they coordinate. As homelessness has been a topic of discussion on this blog a number of times, it seemed logical to investigate. I met with Dr. Bruce Spangler, Chief Executive Officer of the Volunteer Ministry Center.

The center, located at 511 N. Broadway is just north of Fifth Avenue. Across the street from Minvilla Manor Apartments, which it owns and operates, the center actually contains several programs: The Bush Family Refuge provides counseling and support for individuals and families who are at risk of losing housing. The VMC Dental clinic provides dental care to those in need. The Resource Center is a transitional day program to help homeless individuals work their way out of homelessness. The VMC Holiday store offers those in need a chance to work toward points with which they may purchase gifts for family members at Christmas. Minvilla Manor offers 57 apartments to qualifying, chronically homeless individuals.

The center was founded in 1987 in response to homeless people and others knocking on the doors of downtown churches. Feeling their response should be unified both for consistency and so they did not duplicate services, the need they felt had increased tremendously with the loss of psychiatric beds, including 100 very recently at Lakeshore Mental Health Institute.

The response was driven by the churches and Dr. Spangler says it was only in the last decade that the city has become involved in a significant way with the problem of homelessness. Even as recently as the beginning of this decade, the majority of money spent on the problem went toward managing the issue with only 13 cents of each dollar focused on solutions.

Volunteer Ministries has a budget of approximately $1.6 million. The largest percentage (20) is derived from individual donations. Fundraisers provide 17 % and government grants about 16%. Foundations give about 14% and the remainder is from United Way (10%), congregations (9%) and others. 10% of the budget goes to administration, 6% to development and 84% to programs directly benefiting clients.

Of the homeless population, Dr. Spangler says very few are happy with their situation. Still, he insists, “Compassion has to have a context and that context is accountability.” The center is dedicated to a housing first solution. He insists housing is a tool of recovery, not a reward. He also doesn’t like the idea of calling someone a homeless person, but rather insists on putting the person first, preferring to say, “individuals experiencing homelessness.”

Homelessness is complicated, including different types of populations and the problem requires a multi-faceted approach. The most visible concentration of homeless individuals, those beneath the I-40 viaduct at Broadway he says are mostly mentally ill and the gathering includes more than a few predators taking advantage of them.

The Knoxville Area Rescue Ministry, most commonly referred to as KARM, provides emergency services – food and overnight stays. Volunteer Ministries and the Salvation Army focus on transitional services and residences like Minvilla and Flenniken fill a supportive role. The city has an Office on Homelessness, including program director Michael Dunthorn who coordinates with homeless organizations and the Knoxville-Knox County Coalition for the Homeless has been around for thirty years. And there are numerous others involved in the issue.

Dr. Spangler says the number of homeless in the city has been consistent over the years, though there has been a decrease in the chronically homeless since the implementation of the Ten Year Plan to End Homelessness. Other types of homelessness include those who are seasonally or episodically homeless, which is usually short term. Those who have been homeless at least six months, but less than a year are considered acutely homeless. The chronic population would be those who have been homeless for a more extended period of time.

In a typical month in Knoxville, there are about 1400 homeless individuals. The chronic population makes up about 20% of this number and generally involves some sort of mental illness or addiction. In the past this portion of the homeless population ran about 25% of the total.

Responsibility informs the stance of the Volunteer Ministry Center. Dr. Spangler says pointedly, “Volunteer Ministries does not give out blankets,” saying over the years, “we’ve been kind, but we’ve done very little to solve the problem.” In a way he sees giving clothes and blankets as enabling them. It doesn’t deal with the issue.

Long-term housing, he feels, does address the problem. There are three primary long-term housing units for the chronically homeless. Flenniken has 48 units, Minvilla 57 and a facility maintained by Helen Ross McNabb has 33 units. Of Minvilla, he says it has a 95% average occupancy rate and about half the residents who lived there have lived there from the beginning, seven years ago. A quarter of the residents were with Volunteer Ministries in other housing prior to that time.

Of the residents, he says 90% will continue to need supportive housing for the rest of their lives. A case manager is assigned to each resident and they are evaluated. Some would have been in mental hospitals in a previous generation. Feeling strongly that permanent housing has worked, he says more is needed, but residents largely oppose a location near them and so more have not been opened.

Those who aren’t housed may be more visible currently because the city has a program of removal of camps. Dr. Spangler pointed out this is a safety issue, with the camps being filled with human waste, the site of murders and violent assaults. Often, he adds the locations are abandoned specifically because they are toxic waste sites.

The Transitional Day Program offers services to 100 to 120 people at any given time and is another strong focus of the center. Many of the participants are staying at the mission, but they have self identified as people who want to get out of their situation. Each are assigned a case worker who helps them move toward housing and self sufficiency. They continue working with them until they are self-sufficient. Classes, meals, showers and laundry facilities are offered in exchange for work.

There are two case managers at Minvilla and five at VMC. They work closely with KCDC to find housing for their clients. At its heart, Dr. Spangler points out, “homelessness is a poverty issue.” Two case managers work with KARM to identify candidates for their program. Since beginning the housing first effort about 880 have left the street with most of those retaining housing for at least a year. He pointed out that some people will fail multiple times before succeeding.

I asked him about giving money on the street and he says when asked, he tells them, “I don’t give money to people I don’t know.” He points out that meals are available at KARM at 7:15 AM, 12:15 PM and 5:15 PM, so food is available. He also pointed out that you can’t generally hope to have a logical conversation with a panhandler. They have a defined technique and they will do anything to avoid scrutiny of their purported need. Social service agencies, he says are equipped to verify needs and determine who is trying to help themselves.

As for encroaching development around Volunteer Ministries, he sees that as a positive. As the new residents and the homeless come into more direct contact, he thinks the public will exert more pressure for solutions. I asked about the rumors that other cities send their homeless people here and he shook his head, saying it just isn’t so, saying surveys show that about 80% of our homeless population comes from Knox and contiguous counties. He says homeless are in every city because of poverty, accessibility to housing and access to mental health care.

I asked him for parting words and he said, “The answer to homelessness is in the word.” He wishes the community would be more supportive of, “affordable, accessible and appropriate housing.” If you like their approach, they can always use support, financial and otherwise, contact them via the above website and see what you might do to help.