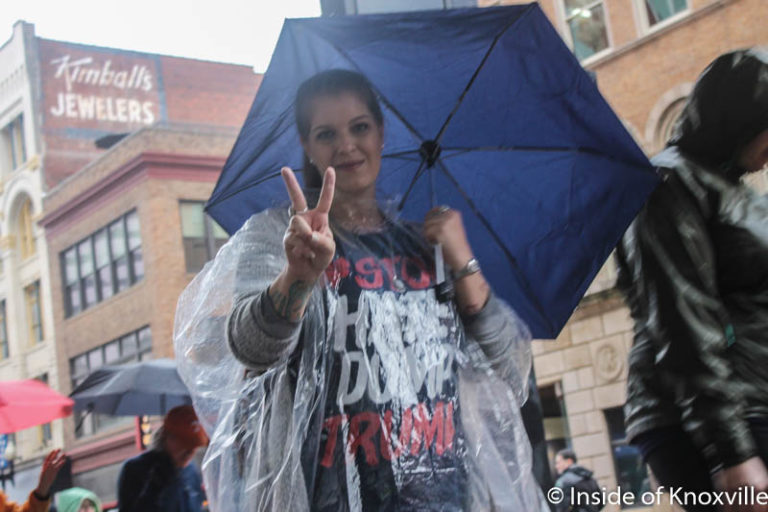 This is a bonus post, since I don’t normally post on Saturdays. I’m posting it for Urban Girl, who is responsible for what you are seeing.

When my family talked through their approach to the Women’s March in Knoxville, they debated placement and involvement of three generations. Urban Daughter being the cautious mother felt the situation could become tense and, while she wanted Urban Girl involved, she didn’t necessarily want her marching.

The decision was made that Urban Daughter would march, while Urban Woman would hang out with Urban Girl and Urban Boy with signs on the sidelines. It worked out well for everyone, though marching didn’t turn out to be as risky a situation as it might have been.

Urban Girl, since realizing her semi-celebrity at about age five, has wanted to help with the blog. Once someone she didn’t know came up to her on the street and called her Urban Girl she decided she was famous and should be allowed to be more involved. On Saturday she wanted to take a camera to photograph the Women’s March for the blog. We set her up with the Canon Rebel I’d previously used and I gave her some light instruction. She’d used simple cameras, but this one was a little more complicated.

The photographs here are the result. I’ve edited and selected, but they show the march from her perspective. They aren’t always in focus, sometimes the subject isn’t clear, but that’s probably not a bad representation of the view from a seven-year-old perspective. She clearly favored children and signs about “girls.” She also likes pretty colors.

I’ve included a dozen here, but she took over fifty. I’ve posted those to the Inside of Knoxville Facebook Page and you can see them there if you’d like to see more from her perspective.