River and Rail Theatre Company Debuts Tonight with “The Unusual Tale of Mary and Joseph’s Baby.” 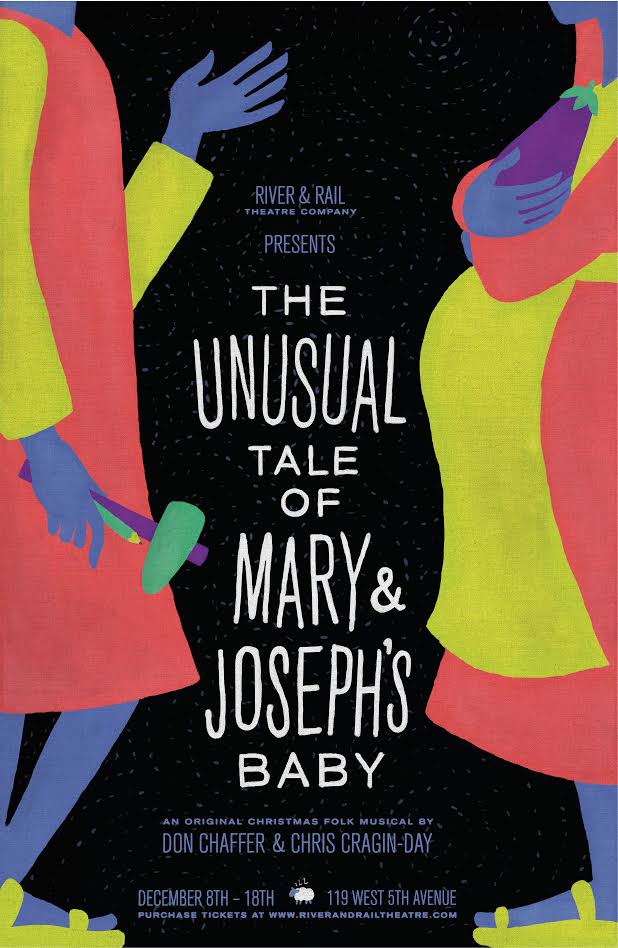 The arts continue to grow and strengthen in Knoxville and the emergence of a new theatre company is always interesting. That this theatre company boasts Tom Cervone, Exectutive Director of Dogwood Arts on its board makes the new entry into our theatre community even more intriguing. I sat down for a conversation with Josh Peterson, co-founder and Artistic Director of the River and Rail Theatre Company, Knoxville’s newest such group.

Josh told me he is joined in the venture by co-founder and Literary Manager (and wife) Amelia Peterson and co-founder and Community Engagement Director, Logan Mahan. Logan is from Arkansas, but has been in Knoxville for three years, while Amelia is a Knoxville native, Bearden graduate and has a BFA in Theatre studies from SMU and worked in theatre in New York City.

Josh is from Dallas and attended SMU where he met Amelia, who happened to be from Knoxville. After graduation, she returned to Knoxville where she spent time in the Fellows program before moving to Washington, DC. Josh had moved to New York City and, though they’d been apart two years by then, they reconnected and married in 2011. The wedding took place in Knoxville, but the couple began life in New York City where he was artistic director for Firebone Theatre Company.

In an unexpected twist, friends who owned the company gave it to them. They had already set in motion a collaboration with Don Chaffer, of the band Waterdeep, and he and Kris Kragin Day produced “Son of a Gun,” in New York. It opened on a Tuesday and hurricane Sandy hit on Thursday. They first presented a version of their current play, “The Unusual Tale of Mary and Joseph’s Baby,” at the Fringe festival in New York City with Amelia directing. It has since evolved to a twenty-song work, eight of which have been added since the Fringe production.

It was New Year’s Eve 2013 when the young couple realized their daughter Penelope was on the way. (She’s delightful at age two and was quite the conversationalist when her father stepped away during our interview to get his coffee.) That piece of information along with the fact that they were making good money, her as a paralegal and him in I.T., while consistently falling financially further behind in the Big Apple, that convinced them the time had come to make a move.

March 1, 2014 they arrived in Knoxville with no intention of starting a theatre company. Josh says he, “fell in love with Knoxville and didn’t expect that.” It was the smallest place he’d ever lived, having spent time in Dallas, Paris and New York City. He said, “It has a vibrancy I haven’t felt elsewhere.”

When his dad died unexpectedly, it  “renewed a sense of urgency to do the things I wanted to do. I wanted to focus on what matters to me.” He asked himself if Knoxville really needed another theatre company. He’s worked in Clarence Brown productions including “A Christmas Carol,” and played “Curly” in their production of,”Of Mice and Men.” After talking with Tom Cervone, he decided there might be a place for  a company producing contemporary and new works.

An idea began to take form of developing a regional theatre appealing to an audience which doesn’t currently attend plays. A decision was made to give away half their tickets to non-profits and others. Liza Zenni was encouraging and, “helped us refine our vision.” He began to understand the challenges when he realized there wasn’t a venue for an audience of 200 to 250. Event venues were not interested in leasing space for a two-week run. For now they will utilize the back end of a building at 119 W. Fifth Avenue – about half-way between First Christian Church and Knoxville High School.

As for the vision of the future for the theatre, Josh says they plan to present, “relevant stories for a diverse audience.” The company wants to explore, “what it is to be human and to be alive.” They want to present diverse plays, some of which will be for all ages and some of which will not. They hope to have diverse casts and attract a wide range of audience members.

Saying they would love to mount two additional productions in the coming year, Josh pointed out that while it takes a large number of people to produce a play – this one has four actors, but involves twenty-seven different people – he points to all the graduates of the excellent program spear-headed at UT by the Clarence Brown Theatre. He points out there is little in the way of theatre for those graduates to do if they stay in Knoxville and he’d like to help keep them here by eventually having a resident company and paying a living wage.

The first production, “The Unusual Tale of Mary and Joseph’s Baby,” was first commissioned by a theatre in Vancouver which wanted a “Christmas Musical.” Starting with the assumption that the Biblical details are correct, the play explores the humanity of the people involved. “What would it have been like to be refugees and told to travel and register, to be a minority and to be discriminated against?” What would it be like to be in Joseph’s shoes – or Mary’s?

Josh says, “the music is gorgeous and elevates the humanity.” He noted that a New York reviewer who, “identifies as a Godless pagan said he was clapping his hands and stomping his feet.” Far from making light of the story – it was recently the service at All Souls – ” it is a recipient of a grant from that group given to groups, “seeking the peace of the city.” He hopes this becomes their annual, “A Christmas Carol.”

Pointing out that this production underscores their commitment to diversity, Mary is played by Ellen Nikbakht, a woman of Iranian descent while Robert George, taking the role of Joseph is African-American. He says it was, “the writer’s vision that the play would be cast with diverse actors.” They are joined by actors Aurora Florence and Taylor Kelly.

The first performance will be tonight at 7:30 PM and the 150 seats are sold out. Tickets are still available for the remaining ten performances, which run through December 18. Tickets cost $18 – $25 and are available here. The group will also give away tickets to charitable groups and those requests may be sent to tickets@riverandrailtheatre.com