Porcelain and Glass: Toilets and Garbage 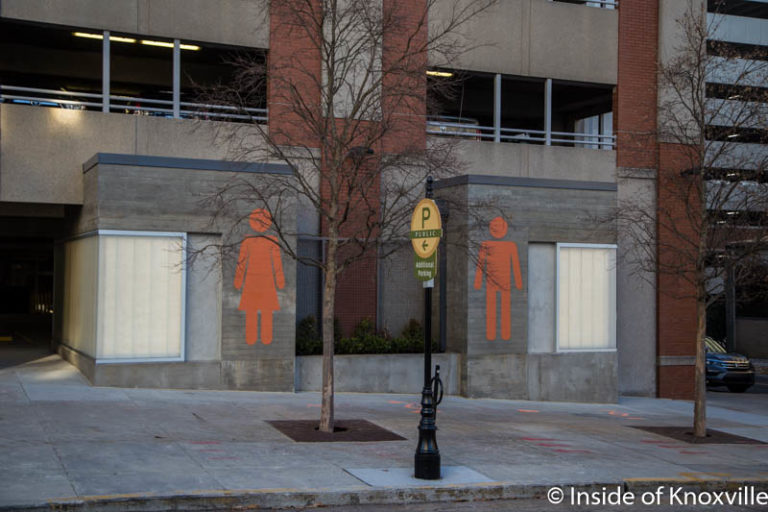 Unlikely topics for an article, perhaps, but each have a current application to what’s happening in the city, though one will likely be welcomed by downtown visitors and the other will not likely be welcomed by city residents who are concerned regarding the topics of recycling, conservation and land-fills.

First, the good news: Market Square now has public restrooms. When I first wrote about the topic (with one of my favorite headlines ever!) four-and-a-half years ago, it seemed like such an obvious need, that it would have been addressed before now, but finding the best spot for safety, aesthetics and practical concerns proved complicated. Announced over a year ago, the restrooms are now open and located in the north end of the Market Square Garage, just around the corner from the square.

They’ve been under construction by Southern Constructors, Inc., since May and the finished product, designed by Smee + Busby Architecture is functional, energy efficient and attractive. The five stalls include a mens, womens and gender neutral restroom. Each restroom has been equipped with a changing table, and both the gender neutrality and changing tables are a great gift to parents out with infants or with children of a different gender from their own.

A tissue-cutting ceremony held earlier this week featured Mayor Rogero and city officials announcing the opening. According to the press release, “The new restroom facility features LED lighting for energy efficiency and safety, plus graffiti-resistant paint and a topiary screen.” The mayor called it, “the most eagerly awaited restroom built in the city,” and that’s no understatement. Those of us who have had to watch people urinating publicly or have found ourselves in a bind at a downtown event – with only restrooms inside businesses which are typically labeled, “For Customers Only,” understand the great need.

The floors and walls are “epoxy-sealed . . . (with) board-formed concrete, graffiti-resistant paint, automatic faucets and electric hand dryers.” The LED lights are designed to add attractiveness after dark and the topiary will add to the attractiveness once warmer weather arrives.

PBA, which now manages all city garages, will manage the restrooms, both the cleaning and the monitoring, which is a concern to some. The doors lock from the inside and the illumination of the barrier around the doors provides for visibility of form so that no one could lurk inside. Regarding hours of availability, the press release states, “Restrooms will be open from 8 a.m. to 10 p.m. daily and stay open later for special events, including next weekend’s New Year’s Eve celebration on Market Square.”

The news on the recycling front isn’t as good. The city has previously moved from multi-stream recycling centers which required residents to travel to centers and then separate their recycling, to single-stream, curb-side pickup, making recycling as easy as possible. Now, unfortunately, we seem to be taking a step back.

Beginning January 1, the only option for recycling glass will be delivery to the city’s drop-off recycling centers. The city points out that when glass is included in the single-stream, it breaks into small pieces along the way which produces two problems, “The intermingled mix of many different kinds of glass produces a very low-quality glass commodity, for which there’s no market; and the glass slivers and particles contaminate other recyclables, downgrading their quality and market value.”

It doesn’t take much digging to find articles like this one that include information like, “According to the Solid and Hazardous Waste Education Center, residual rates [pdf] are roughly 1 percent for multi-steam systems, 2-3 percent in dual-stream systems, and a whopping 15 to 27 percent for single-stream systems.” “Residual rates,” are the percentage of “recycled” material that actually winds up in a land-fill for various reasons. It’s not a 100% is re-used proposition no matter what you do.

The changes also include recycling bins like those you find downtown – they no longer accept glass. City residents are asked to bring glass to the five recycling centers and separate it by color which should allow more of it to avoid the land-fill. You’ll find city/county and UT recycling centers listed here. Unfortunately, it will probably also result in more glass simply being put in the garbage.

For visitors downtown needing to discard a glass container, they will need to take the container to their car to carry to a center later. Not very likely. For downtown residents and others alike, we must make the choice to drive to a center. For downtown residents, specifically, the nearest center is on Willow just outside the Old City. Previous to single-stream and curbside recycling, the location was more central – in the parking lot now occupied by Marble Alley.

The difference is significant for many. I will do my best to collect the glass for a longer time (it will take longer to accumulate enough to justify the trip) in my condo and then attempt to recycle, but that means either 1) carrying the bag to the car, leaving the garage and driving or 2) carrying a very heavy bag of glass about 3/4 of a mile each way from my home. That’s a long way in all kinds of weather. Not great options.

What will happen, almost certainly, is that less glass will be recycled. I hope I’m wrong. The press release concludes, “The City is gathering input from residents about ways to improve the operation of the drop-off centers – including the possibility of adding new locations to make it easier for residents to recycle glass. To take part in a survey, please click on this link: ttps://www.surveymonkey.com/r/BFXV2Q2.”

I hope you’ll take the time to complete the survey. I’m not sure there is a perfect solution, but it’s a problem worth continuing to work with until we arrive at the best solution possible.