Nothing Too Fancy Charts a New Course 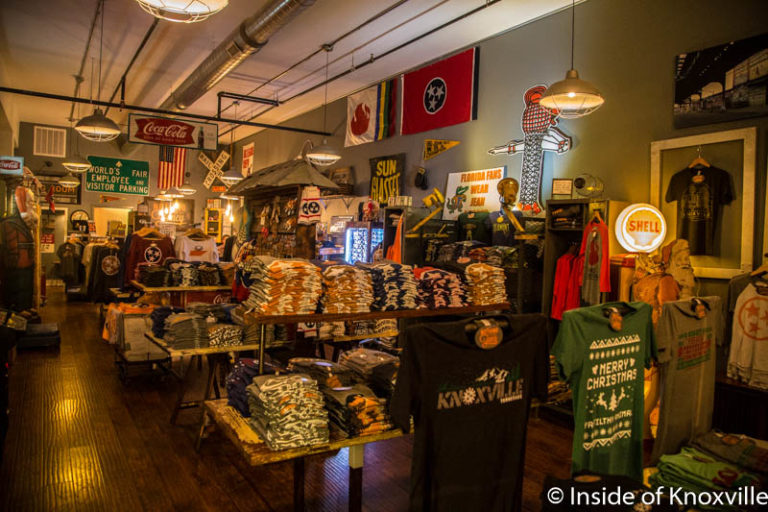 It seems Nothing Too Fancy has been a part of downtown forever, cranking out the coolness they are known for. They’ve actually been open for a bit over four years and have been successful from the beginning. I admitted to them recently that when I took photos the night before they opened for the article I wrote about the store, I wasn’t sure they would make it. Remember that next time you are looking to me for some sort of opinion on what will work.

The store is co-owned by John Burnett, his son Dustin and Lisa Cyr Burnett, who is Dustin’s wife and who, she pointed out to me recently, was completely written out of the first article. In penance for that oversight, in this article, she shall be referred to as the “owner,” and John Dustin shall be referenced as her “assistants. In seriousness, it has been a business the three have poured their souls into and they have been rewarded.

They’ve come to be respected both for the coolness of their product, but also for the quality of their product. Their product is made from a blend of three fibers (cotton/polyester/rayon) and, as everyone knows who has worn one of their shirts, it just feels better. The purchased their own equipment from Ryonet in 2015. They print their own shirts using that equipment and water-based ink. Many other printers use plastisol, which has been banned in Europe. Ryonet is a company of screen printers, so their equipment is built by printers for printers. They are also, like Dustin, Lisa and John, very socially concious.

Recently, another company caught Ryonet’s attention. Goex had started a factory in Haiti making shirts from all-American cotton and other fibers and paying a living wage to their workers. A living wage in Haiti sounds horrific by U.S. standards. The minimum wage for garment workers rose to just over $5 a day in 2014. Goex pays three times that amount. Ryonet, a much larger company, saw an opportunity to help Goex substantially expand operations and, thus, spread the wealth to many more workers.

The owners of Ryonet turned to its customer base in search of companies that could carry the brand and help it lift off quickly. They selected twelve screen-printers, of which Nothing Too Fancy was one. They quickly struck an agreement whereby Nothing Too Fancy and the others would use the shirts from this factory exclusively – assuming they produced the kinds of shirts needed. Nothing Too Fancy is one of only two of the twelve which has its own retail outlet, making them a very important part of the group.

Lisa and (her assistant) Dustin have been in Haiti this week as a part of the diverse group of printers, which includes women-owned, Muslim-owned and others, visiting the factory to discuss the products they need to be produced and to actually meet the people doing the work. While there they will also visit orphanages and witness the severe need in a country so poor parents are abandoning their children and orphanages can’t take them all in.

The factory currently employs about 100 and the hope is that with just these twelve companies agreeing to use their products exclusively, they can increase that very rapidly to 400 people making several times the normal pay for the area. The hope is to pressure other employers to have to begin paying similar wages to compete.

On the domestic side, Nothing Too Fancy also approaches the “American Made,” goal they had early – at least in raw products. They will know where their cotton was grown (Georgia and South Carolina) and will be able to visit those farms and witness the entire process through to the shirts they will stock. Ryonet is also working on a substitute for rayon that is produced by using recycled plastic bottles. The model allows for social good to be achieved in multiple ways at once – and it doesn’t add significantly to current costs.

Major figures in the garment industry have gotten involved in the effort, such as a former CEO of Hanes. The hope is that after the twelve initial companies have integrated the product, the larger market will be targeted, with the hopes of then expanding the factory to as many as 1200 employees. The full market release is scheduled for 2020.

The time table is pretty immediate: Nothing Too Fancy plans to have the majority of their new stock supplied by the company by early 2017. As old stock sells and new stock arrives, you will only find shirts manufactured in the Haiti plant in Nothing Too Fancy. They are considering a tag that will tell customers where the shirt comes from and makes the point that it was not produced in a sweat shop, as is true for so many textiles. The quality and price should remain constant, but the good accomplished should multiply.

By the time you are reading this, Dustin and Lisa should be home and, I’m guessing, changed. It’s hard to see that kind of poverty and desperation and not be impacted. If you’d like to hear about their trip, their experiences and further details about their plans, please tune in to WUTK, 90.3 FM, or stream it here, Sunday morning at 10:00 AM when I’ll be joined by the couple on Knoxcentric: Powered by Inside of Knoxville.