A Look at the First Completed Condo in the Tennessean 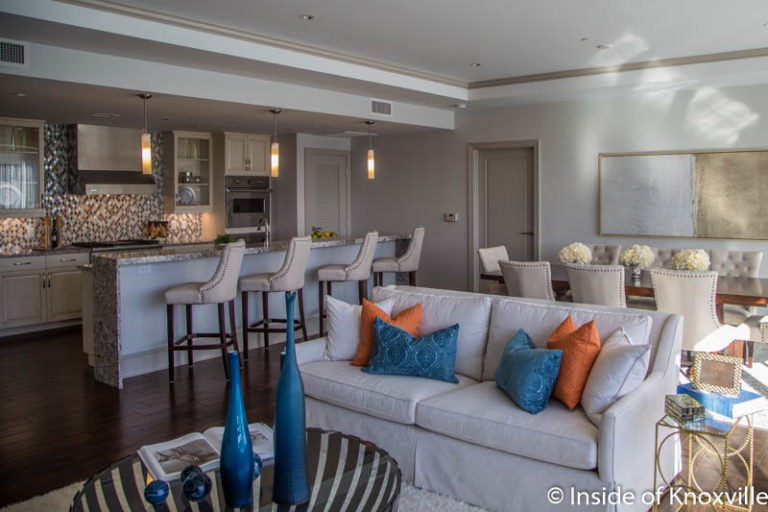 In a relatively short turn-around time for a project of this magnitude, the first condo in the high-end luxury project, The Tennessean, has been completed. It was only last spring that the project was announced and I took readers through the shell which would become The Tennessean residences and hotel. It’s worth taking a look just to understand what has happened in about eight months.

I met with Ryan Cazana to take a look at the finished condo and talk about the project. The unit you see here is unit 605, has just over 1800 square feet and faces Clinch Avenue. The development runs seven floors, with the top two floors devoted to condominiums with prices starting around $1.2 million. Six condos on each floor include one on each of the four corners  and two on the sides. As the number would imply, this unit is on the sixth floor.

The other units range up to 2400 square feet and there are three different floor plans. The eight on the corners have views in two different directions, while two (including this one) face south and two face north. The units feature ten-foot ceilings and nine-foot windows throughout. The views you see here are from the main room, but it is the same in both bedrooms, though with a slightly different angle. From any of the rooms, the city skyline, convention center and sunsphere are highlighted.

This unit features a great room with kitchen at the center, with much of the square footage devoted to the entertaining space. A bedroom is located on either side of that space, each with a bathroom. The master includes a double sink and a large linen closet, while both include sleek, modern showers.

The kitchen features Viking package, high end appliances, a combination of glass and solid-front cabinets, a modern tile backsplash and quartz counter-tops. A bar with room for seating for four fronts the sink and food preparation counter. Clearly not your typical downtown condo kitchen, it should satisfy virtually any culinary level to which a potential owner/chef might aspire.

Dark hard-wood floors run throughout and the gas fire-place is a central feature of the entertainment area. But it’s really all about the massive windows and the views they provide. A surprising inclusion regarding the windows is that the top half of the windows slide open to provide an open-air feel to the space in good weather.

As noted in the prior article, the amenities are promoted as being a significant portion of the appeal. Residents will have two assigned parking spaces in the hotel garage in a segregated section with direct elevator access to the residential floors, or valet parking if preferred.

Room service, private storage and on-floor trash collection are also provided and the building will include The Drawing Room, which is described as “a place for fine spirits. Residents will also have a access to a fitness center and the Windows on the Park restaurant in the connected, adjacent building.

The construction has proceeded on schedule and the plan is still for an early spring opening. Ryan Cazana told me that “by April 1 all residences and and the hotel” should be open and available. One of the units is under contract, with interest in others. With one unit complete and available for showing, the hope is the others will sell more quickly.

Anyone interested in the condos may explore the homes further on the Tennessean’s residential website. You may also contact Kimberly Dixon Hamilton at 865-588-5535. Further information regarding the hotel portion of the Tennessean may be found here. Reservations in the hotel are being accepted, from April 1st, with rates running in the low $200 range.