Thanksgiving Quickly Turns to Christmas in the City 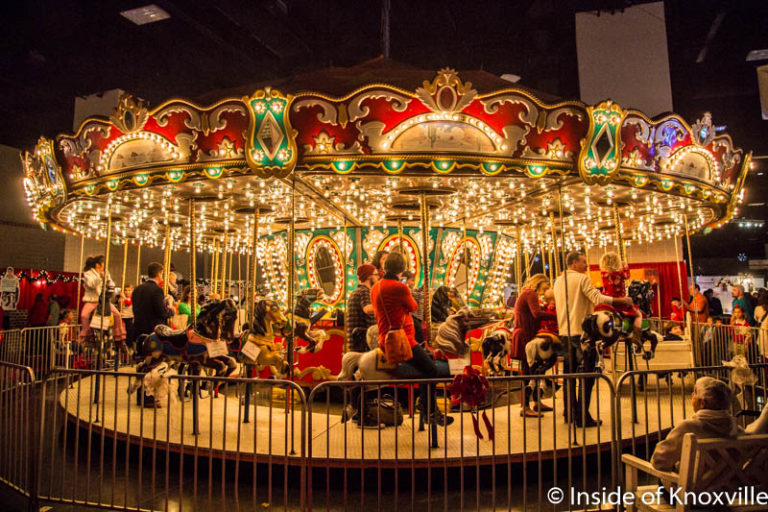 I hope you had a wonderful and warm Thanksgiving filled with friends and family and lots of love. I know some people dread the holidays for many different personal reasons and, for you, I hope the holiday provided you with good moments and that your worst fears weren’t realized. Holidays are a tricky business.

Ours were a mixed lot. About half the Urban family fell ill with a stomach virus. Not to worry: illness and injury is practically a family tradition. I’ve spent a number of holidays in emergency rooms from Knoxville to Mobile, Alabama, so it’s just how we roll. Those of us who stayed healthy enjoyed many wonderful activities and those who were ill squeezed a bit of fun in on one end or the other of the holidays.

We started off with Urban Brother, Urban Girl and myself walked to the Clinch Avenue viaduct to see the Capitol Christmas tree as it makes its journey to Washington. It felt strangely patriotic just to be a part of it all and to see the signatures and messages of fellow country-men and women from cities to small towns, reservations and more. Urban Girl wrote her name and figured that was message enough for Washington, D.C.

Urban Brother, Woman, Girl and myself attended the great production of “A Christmas Carol,” at the Clarence Brown Theatre. All the components were solid, from lighting to set, acting , staging and beyond. High marks were given by all to the vocals which were excellent throughout. It was Urban Girl’s first professional production and she’s in love with the theater. I hope she enjoys many, many more fabulous productions in her life.

Thursday we entered the international phase of the holiday. We enjoyed a wonderful meal with new friends from the middle east, San Francisco and Vancouver, as well as Knoxville. Through the course of the next several days we would run into and have conversations with people from Los Angeles, San Diego, Scotland (by way of Brighton) and the Netherlands. All in all, it was a pretty amazing cross-section of the world that landed in our small city for the holiday.

Friday, those of us on our feet, enjoyed the lighting of the Christmas tree on Krutch Park with the LED lights which debuted last year and the accompanying fireworks. Thanks to our friend Mary Kathryn, we were able to watch from a second-story office across the street which afforded wonderful views. The crowd filled both the park and Gay Street and we guessed at least two-thousand were gathered.

There had to be music, of course, and after the lighting, I heard a bit of Will Carter at the WDVX Ho Ho Hoedown and was quite impressed. He’s local and I’ll pursue his music online. I also heard a bit of the Pinklets, local sisters (ages 12, 14 and 16) and they continue to get better and better. I missed Emi Sunshine, but Urban Brother and I did hear If Birds Could Fly at Boyd’s and shared a table with new friends Tom and Ray. If Birds Could Fly was excellent, with vocalist Brittany Carter moving from Loretta Lynn to Guns n Roses with ease.

After an excellent brunch at the Royale on Saturday morning, Urban Brother had to drive south. I enjoyed a great conversation with Vance Thompson on Knoxcentric: Powered by Inside of Knoxville on 90.3, WUTK Sunday morning, after which a more-or-less recovered Urban Daughter, Girl and Boy joined Urban Woman and myself for our annual (and re-scheduled) trip to the Fantasy of Trees. We’re big fans of Children’s Hospital, having benefited directly from their good work when our daughter was an infant and love supporting what they do.

The event really is a blast for the little ones. Urban Boy (age 1) was blown away at all the “balls.” It’s one of his few words and the ornaments blew his mind. The sitting on Santa’s lap part, not so much a fan. Urban Girl, still drooping a bit, enjoyed shopping, face painting and nail painting.

So, we muddled through a bit of illness for a fun holiday and I hope you did, as well. I have many more photographs from each of the events shown here, which I’ll publish later on the Inside of Knoxville Facebook page. There is much, much more coming your way as the holiday progresses. Check out the holiday preview from last week or the current ten-day planner for all the details.