Bob Dylan is Here; He’s Not There – What to Expect 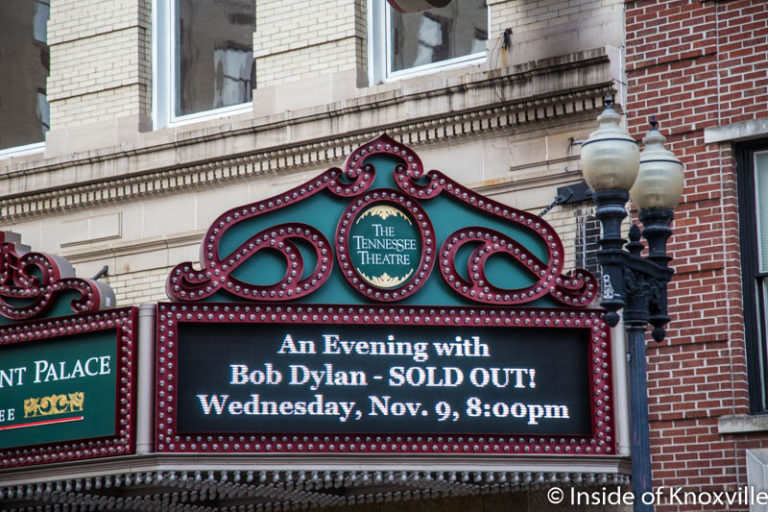 Tonight, Bob Dylan plays the Tennessee Theatre in the heart of downtown Knoxville. When the concert was announced, I noticed conversations spring up on Facebook as to whether folks were going and whether it was worth the price of the ticket.

With ticket prices ranging from $60 to $130, most of the conversation tended to center around whether Bob’s current concerts are of a high enough quality to warrant the expenditure. The verdict seems to have fallen largely in Bob’s favor: The concert sold out quickly.

As I read the conversation, it occurred to me that whether concertgoers will be pleased with what they find tonight or not, will largely be dictated by expectations. And I realized that’s where I can help. With that in mind, let’s look at what you’ll likely find and what you won’t at the concert tonight.

I started listening to Bob Dylan sometime around 1970. My first album was “Greatest Hits, Vol. 1,” which I bought used from a high school mate for $2. The first album release of new studio material I remember was “Planet Waves,” in 1974. It was his fourteenth release and his first to hit number one. My first concert experience was in 1976 in Mobile, Alabama for the Rolling Thunder Tour with Bob, Joan Baez and a host of others.

In the years since, I’ve bought every release and I’ve attended well over thirty concerts. My daughter fell for the bard when she was thirteen-years-old and she and I saw Bob in concert at least once a year for the next thirteen. Some of the concerts have been treasures and others have been less so.

Expectations are a funny thing. For an artist who records and performs for over fifty years, they, hopefully, change and grow. Bob certainly has. But too often, we want the artist to be the same as they were when we first fell in love with their music. So, who did you fall in love with and who is this man who’ll visit us tonight?

When Bob first appeared to most of the public (though in very limited numbers), he was twenty-one years old. Fresh-faced, sort of goofy and doing mostly covers by Woody Guthrie and others. That guy lasted about a year and was gone.

In his place was a world-weary, sometimes angry young man who recorded songs that have become a part of the American psyche. Playing an acoustic guitar and a harmonica, the world discovered this version of Dylan. “Blowin’ in the Wind,” “The Times They Are a-Changin’,” “A Hard Rain’s a Gonna Fall,” “Maggie’s Farm,” and many more from this era prompted the first proclamations deeming Dylan a poet, a prophet or, “the voice of a generation.”

That’s who he was for about three years. Then he went electric and paired amphetamine-fueled lyrics with rock and roll, changing the genre forever. His voice changed. His tours grew. He was called Judas and booed. His record sales increased and he became an international star. His voice changed from its earlier sound. This is who he is, right? No. He was that person for about two years. Two years that produced three of the best albums in rock history: “Bringing It All Back Home,” Highway 61 Revisited,” and “Blonde on Blonde.”

Then Bob got quiet. He performed very little from 1967 – 1973. He did record – and that voice! The vocals on “All Along the Watchtower,” “Lay Lady Lay,” “If Not for You,” and “Knockin’ on Heaven’s Door,” didn’t remotely resemble that angry young guy. Simple music and lyrics with a folk or even a country twist highlight albums like, “John Wesley Harding,” (1968), “Nashville Skyline,” (1969) and “New Morning.” And a smooth voice unlike ever heard before or since from Dylan. Just when some felt Bob was finished – who goes eight years without a tour and lives to have a career left over at the end? – he came back with some of his strongest material and a voice somewhere between his last two. Topical songs (“Hurricane,”) were sprinkled in with very personal writing, (“Forever Young,” “Simple Twist of Fate,” and “Sara,”) on a run of albums that saw the height of Bob’s charting career with three consecutive number albums including, “Planet Waves,” “Blood on the Tracks,” “Desire.”

And after an incredible two year run, that Bob was gone. In his place was an evangelist. “Gotta Serve Somebody,” off the “Slow Train Coming,” (1979, #3) album marked the beginning of his most overtly religious period. And the voice was totally different. Shot by the extended Rolling Thunder or deliberately attempting a new sound, it was hard to say. But after the religious trilogy, that guy was gone.

“Infidels,” in 1983 promised a return to form that didn’t last and Bob struggled through the 1980s making sporadically good music and looking for all the world like he was nearing the end of his creative line. “Oh Mercy,” (1989) suggested there might be more in the tank. “Good as I Been to You,” (1992) and “World Gone Wrong,” (1993) revealed a return to his folk and blues roots, paired with perhaps his best recorded guitar work. “Unplugged,” (1995) found Bob adopting his most nasal sound ever, but seeming to have found his footing, again.

All that was swept away by a new, more pensive version of Dylan on “Time Out of Mind,” (1997). It marked a return to songwriting form which was followed by solid-to-excellent albums in subsequent years: “Love and Theft,” (2001), “Modern Times,” (2006), “Together Through Life,” (2009), and “Tempest,” (2012). Ruminating on death with a voice that sounded weary and worn, it seemed this was the last incarnation.

But then there was this Christmas album mixed into the bunch, “Christmas in the Heart,” (2009) and then Bob turned to Frank Sinatra and the crooners for two albums of tributes singing the classics on “Shadows in the Night,” (2015) and “Fallen Angels,” (2016). His stark growl of a voice actually transforms some of the more saccharin songs into something more complex and interesting.

So, you probably fell in love with one of those renditions of the man. It’s tempting to expect that fiery prophet from 1964 or the electric Dylan from 1966 to step out on stage. Some might have seen him in the 1980s or 1990s and expect that guy. He’s not there. Any more than any of us can go back thirty years ago to who we were then. And if we or he were the same, would that be a good thing?

Which leaves the question: If not any those guys, exactly who and what do you expect when you see Bob live? It’s a complicated question that can shift from one night to the next. But there are certain things you might expect and others you might not.

But he will play twenty songs and about a quarter will be from the 60’s. He’s been playing “Blowin’ in the Wind” as one song in a two-song encore. A half-dozen will be Frank Sinatra-style crooner songs and the rest will be a mix in between, leaning heavily on the albums from the last ten years or so.

He will play piano and his face will be generally obscured, but he will also come to the center of the stage and stand at a microphone to sing. There will likely be a bit of harmonica. And his vocals? They aren’t what the casual fan expects. They are rough and low, though sometimes one of the earlier voices shines through.

Check out the recent video above. This recording is from his recent desert concert and offers a pretty good indication of what you’ll hear.

One caveat to all of the above: This is what Bob has been doing recently. He may change it up at any time. On rare occasions he has responded to a significant current event – though it is usually in a sly manner, with the addition of an appropriate song, for example. Don’t expect him to grab the mic and discuss anything on your mind or his.